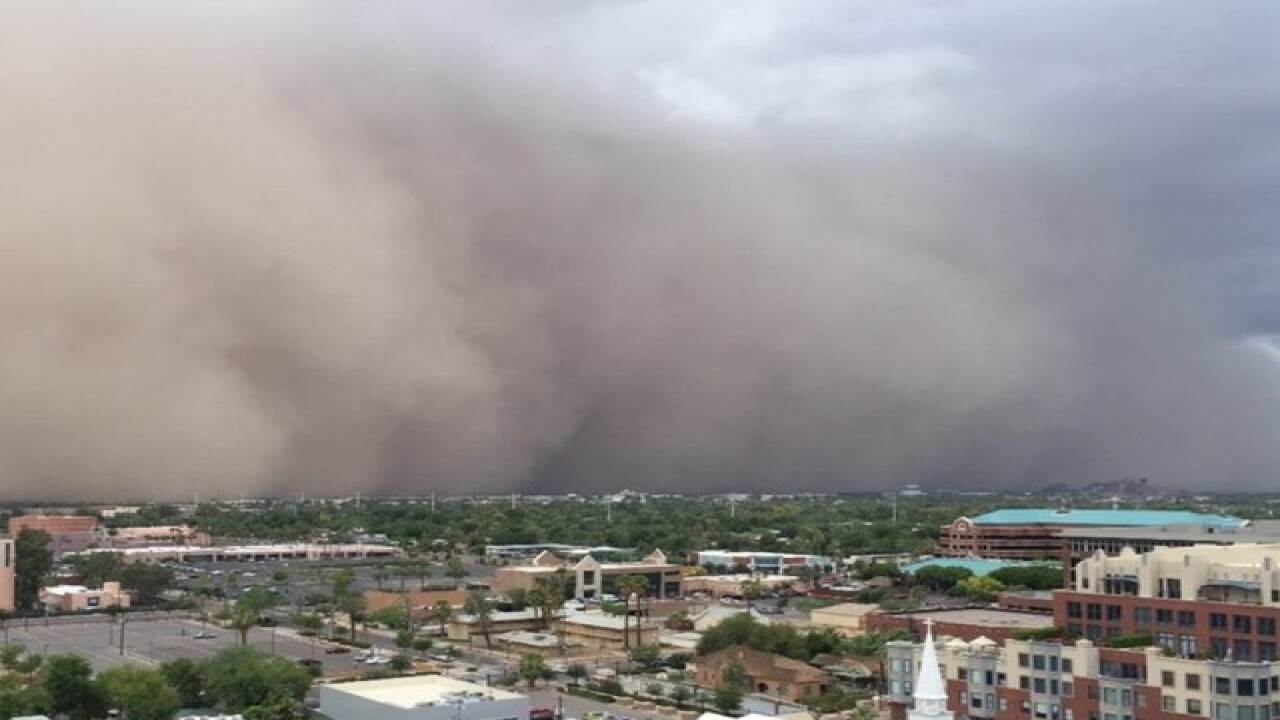 Parts of the Phoenix area became engulfed in a dust storm Tuesday morning as bad weather made its way north through Arizona.

The National Weather Service said a storm that's related to a tropical storm in Mexico moved northbound and affected a large portion of the state.

Apache Junction and Fountain Hills saw the most rain with at least 1.5 inches by midday.

Some residents in Apache Junction had their backyards turn into pools at the height of the storm.

At a mobile home park near Meridian Road and Superstition Boulevard, ABC15 saw maintenance crews taking action to help dry out the area by knocking out cement walls to drain the water. Gerardo Esquivel was pounding away with a hammer and told us that he has never done something that drastic before.

"I lived here in Arizona for 20 years, and this is the first time I'm doing something like that just to get the water out of the property,” Esquivel said.

Sissy Ford has been a resident of the mobile home park for four years and was thankful that Esquivel came to help drain the water.

"It started [slowly], but I knew it was going to flood because it just wouldn't stop," Ford said.

Ford lives on the corner of the park, and while the water was draining lots of random items and debris came here way.

"I told somebody their sofa floated down," Ford said. "This is the worst we've seen it.”

Ford would like to start a neighborhood clean-up group to try and sift through the debris.

And rain in Fountain Hills caused flash flooding in the washes. There was no major damage reported, but all the extra water made its way onto the Beeline Highway and caused minor traffic problems.

"I haven't seen it like this in a long time. This is probably the best flash flooding I've seen out here," said Trey Greenwood, an independent storm chaser out on patrol Tuesday afternoon. "Impressive, very impressive."

Now, it’s all hands on deck at the Arizona Department of Transportation. Dozens of staff members are on standby for the next round of rains.

Nintzel also said that motorists could help by not throwing garbage along Valley highways. While it hasn’t been much of a factor in the storms of the past week, Styrofoam cups, plastic bottles and other trash can slow or even clog drainage systems.

There is a total of 59 pump stations along freeways that require those facilities. The pumps inside those stations are very powerful, and many of them can remove between 10,000 and 12,000 gallons of stormwater per minute. In other words, a single pump could empty a 30,000-gallon backyard swimming pool in about three minutes.

Longer term ADOT projects to prevent flooding include replacing old pump stations, some of them installed in 1964 during the Johnson Administration. The project will take place along Interstate 17, between Cactus and Greenway roads-- that will cost about $7 million.

"In future years, the agency is working toward investing more than $30 million for improvements to other pump stations around Valley freeway," Nintzel said.