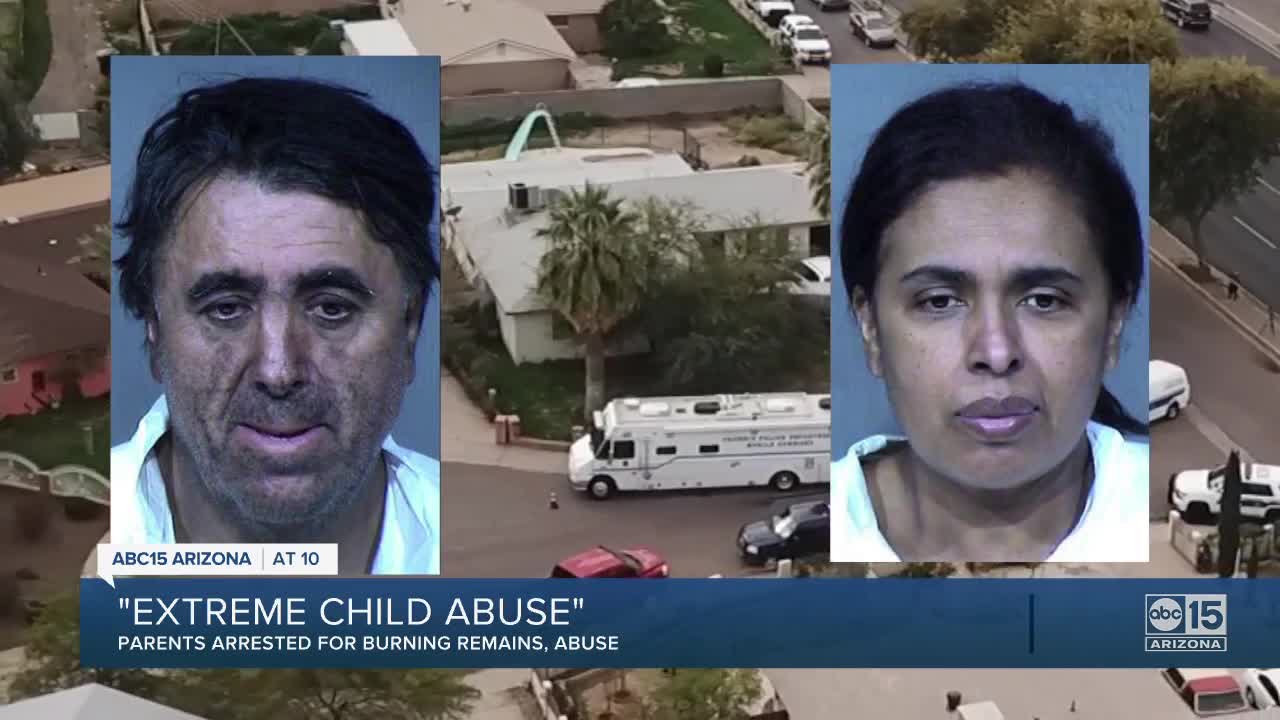 Phoenix couple is facing charges they house on fire after authorities had been there to remove a 9-year-old boy and 4-year-old girl over child abuse allegations. 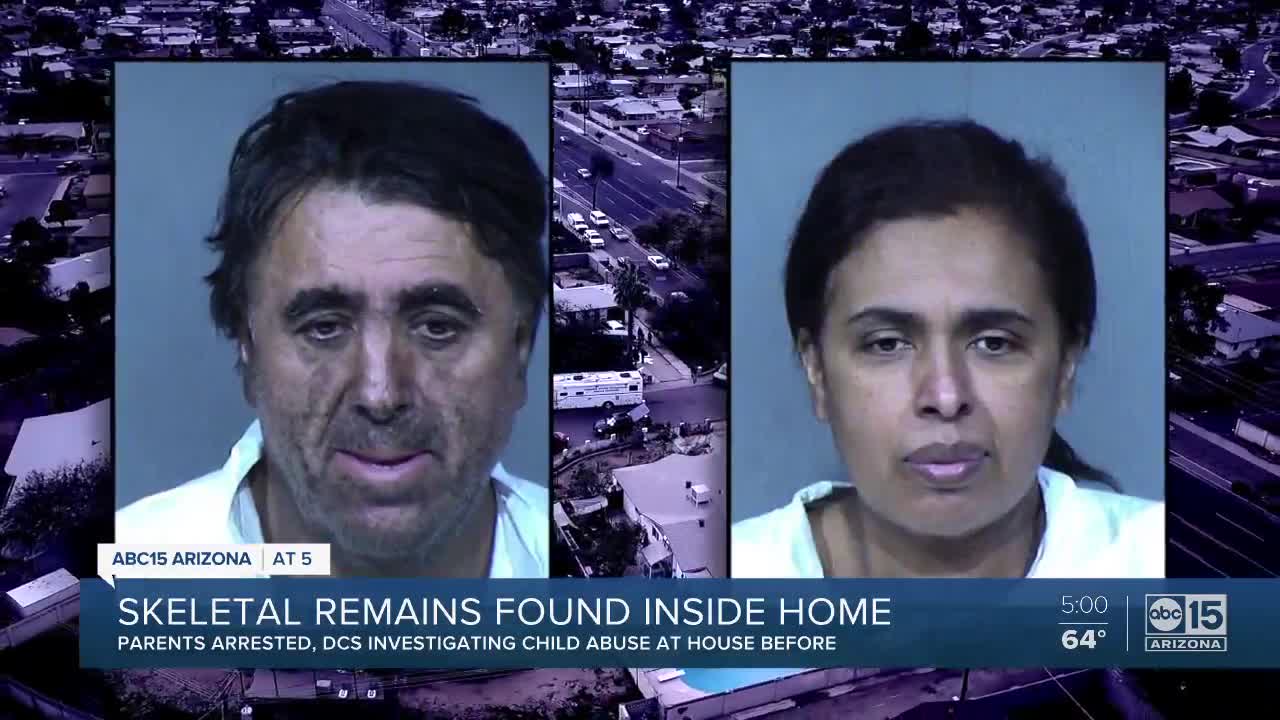 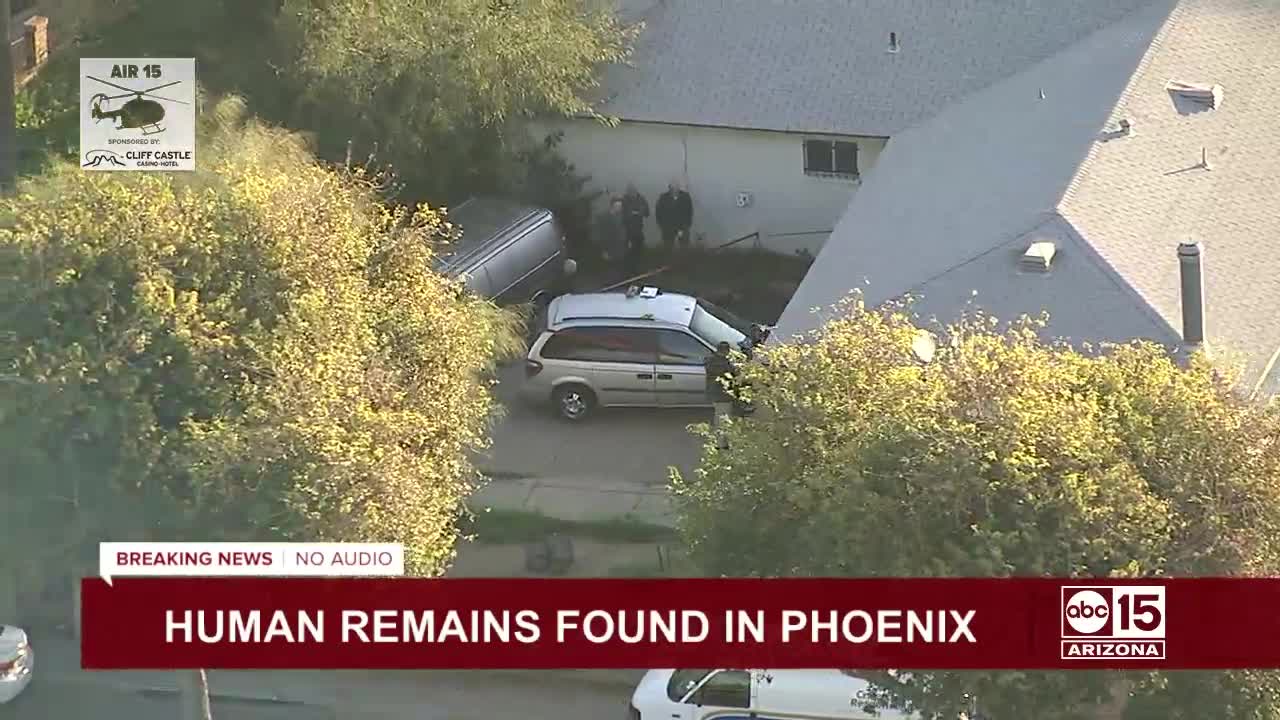 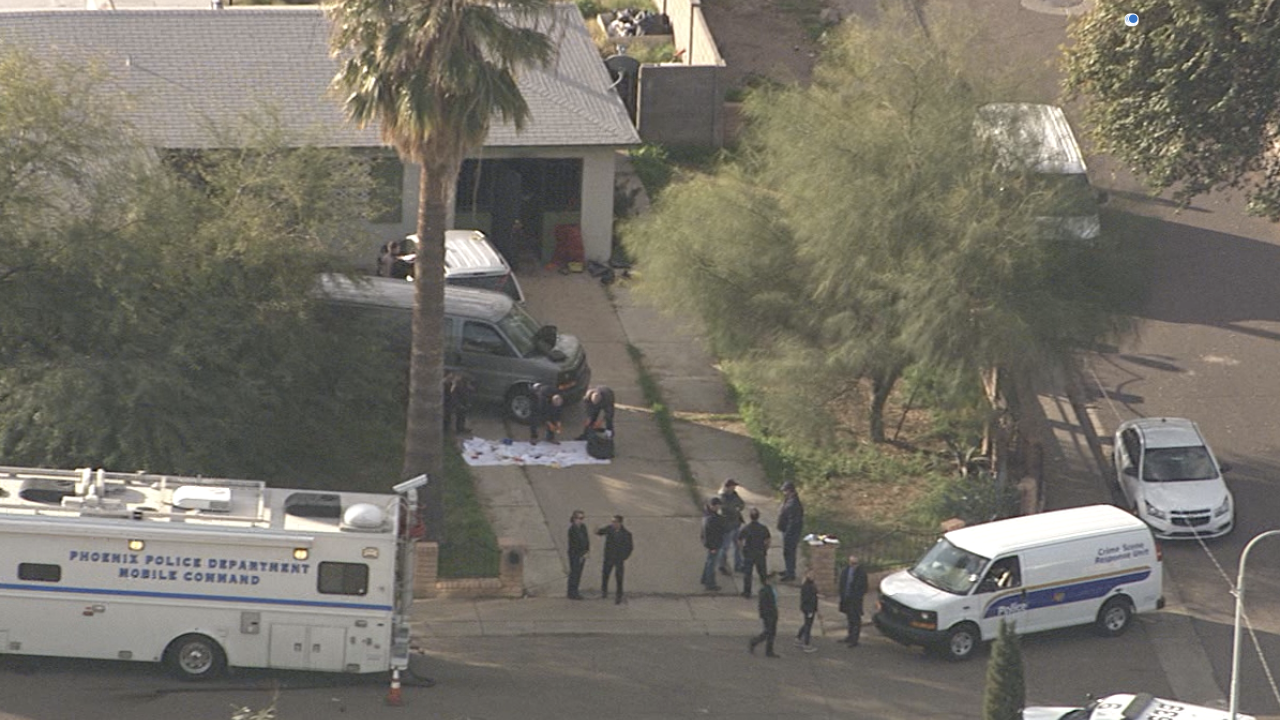 PHOENIX — Police are investigating after human remains were found at a Phoenix home where officials have been investigating possible child abuse.

Last week, on Jan 20., Phoenix police were called to the home near 59th Avenue and Camelback Road to check the welfare of an 11-year-old girl who said she was home alone and scared. That day, the child was taken into custody by the Department of Child Safety.

On Tuesday, DCS went back to the home and removed two other children, ages 9 and 4, due to a child abuse investigation.

About an hour later, Phoenix fire crews were called to the home when smoke was seen. Fire officials said Tuesday it was a fireplace fire that appeared to have gone out of control and did not extend to the rest of the structure.

Breaking: Human skeletal remains found inside a home after a fire yesterday near 59th Ave & Camelback. Homicide investigators at the scene. PIO on scene with media update in the next hour. pic.twitter.com/9Kr7nhPPOR

During their visit to the scene, human skeletal remains were found. According to IA video, the remains found were that of a child. The child's name or age have not been released.

ABC15 spoke to neighbors in the area, and most said they'd never seen any children at the house.

Tequila Johnson works down the street and said she saw the police and fire activity Tuesday night. She came back to check the scene Wednesday.

"I just started crying automatically because I'm like, if they're there that long something horrible has happened over there," she said. "It's too much, it's too much. It's scary, it's sad. I feel bad for whoever it was and just hoping that the kids are okay."

The parents of the 11-year-old girl were both taken into custody Tuesday and have been booked into Maricopa County jail. They've been identified by police as 56-year-old Rafael Loera and 50-year-old Maribel Loera.

Investigators believe that while Rafael helped try and conceal the alleged crimes, Maribel was the main source of abuse.

"There are allegations of extreme abuse involving several children...and allegations of abuse that possibly led to the death of a child," said the prosecutor at Maribel's initial court hearing.

The prosecutor also had strong words for Rafael's alleged role. "He allegedly admitted that he left the victims in the care of the co-suspect knowing that the abuse was happening," she said.

The Tolleson Union High School District confirmed to ABC15 Rafael is an employee of the school district. They said that he will no longer be allowed back at Sierra Linda High School, where students say he worked as a translator for Spanish speaking students and their parents.

"He was just quiet, like, he kept everything to himself. He would never talk to us," said one girl who said she noticed Rafael in the back of her class.

"We can't correlate the charges to the person we knew at that time," said one mother. "It’s very shocking. He was one of those figures that we looked up to."

The district sent a letter to parents saying in part, "Sierra Linda High School is committed to the safety and security of our students and staff. Therefore, it is imperative that we share the following information. We want to make you aware of the arrest of an employee on serious allegations that have already been shared via media outlets. The alleged crimes did not occur at Sierra Linda High School and the staff member will not return to the school. Of course, we are very troubled by this incident."

Right now, neither parent has been charged with murder, but police and prosecutors have said that could change depending on the autopsy results from the remains.

Both parents now have incredibly high cash bonds. Prosecutors told the judge they are considered potential flight risks because, at the time of their arrest, Maribel had "$4,800 in her purse...as well as her passports and passports of other family members on the bed next to her purse."

Detectives say it also appears Rafael may have set the fire in an attempt to commit suicide, in addition to hiding evidence. "He is alleged to have admitted to setting a fire yesterday to end his own life and allegedly burn his home down," the prosecutor told the judge.

It is also unclear if the children were biological or adopted; both Phoenix police and DCS have not answered the question directly.