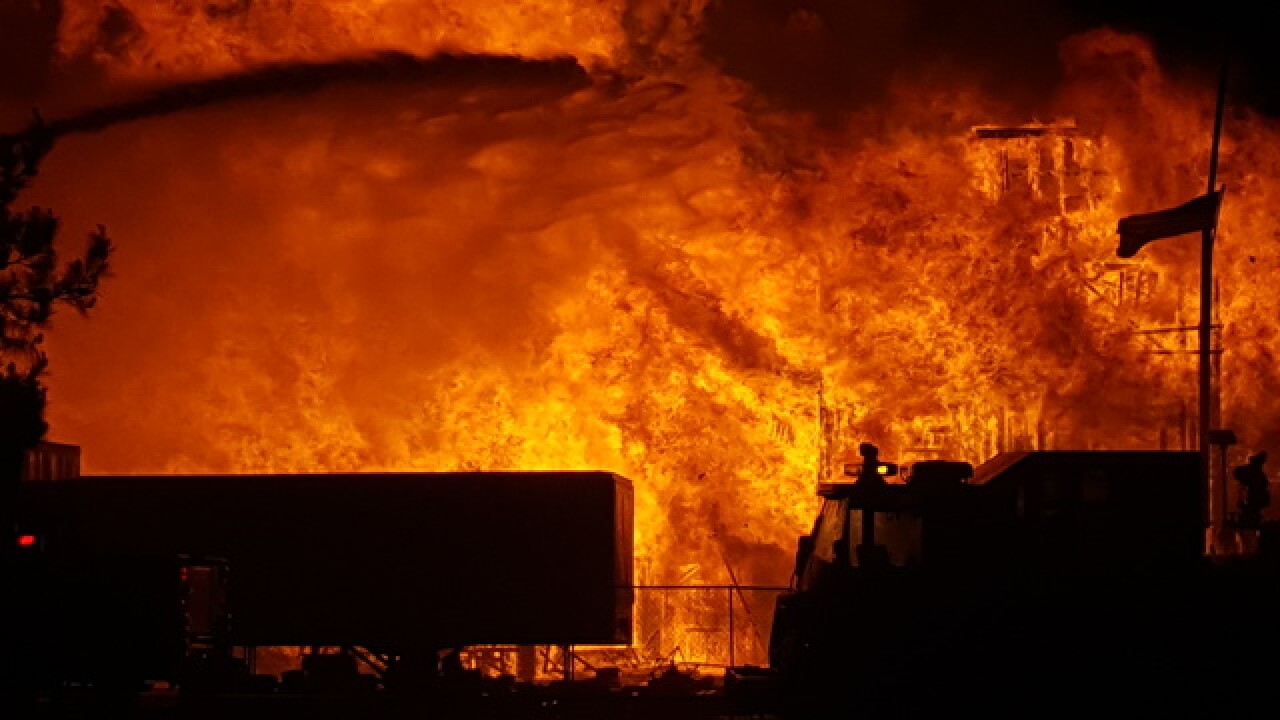 Dozens of people evacuated after a 5-alarm fire have been allowed to return to their homes, nearly 24 hours after the fire ignited.

An estimated 120 firefighters battled a 5-alarm blaze at an apartment complex under construction in Gilbert Saturday.

Gilbert firefighters said people living along Civic Center Drive to Nunnely to Devon near the intersection of Gilbert and Warner were evacuated.

Many homes that were evacuated had melted walls and windows shattered because of the heat from the nearby fire.

Mike Connor with the Gilbert Fire Department said the road in front of the complex that went up in flames was melted because of the extreme heat.

Connor says closures are expected to continue in the area for most of the day Sunday. Eleven people were assisted by the Red Cross after being evacuated from their apartments, however many more were affected in the nearby areas because of the extreme heat and danger the flames posed.

WATCH: Raw video from Air15 over the scene of the fire

The Grand Canyon chapter of the American Red Cross said seven volunteers were on the scene assisting 60 people displaced by the fire.

A huge thanks to Sal's Gilbert Pizza for dropping of food for evacuees! ? pic.twitter.com/8EkElSv5PD

The wellbeing of residents’ animals was a concern during the evacuation.

Greg Quinn said he and his wife were out shopping when police kicked down his apartment door. Quinn’s two dogs were inside the home at the time.

Quinn and his wife found out about the fire, but could not get back to their home to check on the apartment and their animals.

“We were all worried… trying to remain calm,” Quinn said. Though he had no way of knowing it then, Quinn had no reason to worry.

A Good Samaritan had scooped up the dogs, and later brought the pets to the evacuee shelter at the Gilbert police station, Quinn said.

“I’m like, ‘Cloe, what are you doing here?’” Quinn said when the dogs turned up at the shelter, where he had gone.

“When tragedy strikes, no matter where you are, people just band together,” Quinn said.

He said that he would return the favor if he ever got the chance.

Officials said the evacuation order for those living in the neighborhood near the fire was lifted just before midnight, though people living in Legacy Village Apartments remained evacuated until further notice.

@abc15 Fire at new apts in Gilbert at Gilbert/Warner pic.twitter.com/Cpf5eYSyaY

Officials with the National Weather Service office in Phoenix said smoke from the fire was also showing up on radar at sunset.

The fire in Gilbert is being detected by weather radar. #azwx pic.twitter.com/k16Q62aAl3

Warner Road, which had been closed for nearly six hours while crews were on scene, reopened just before midnight.