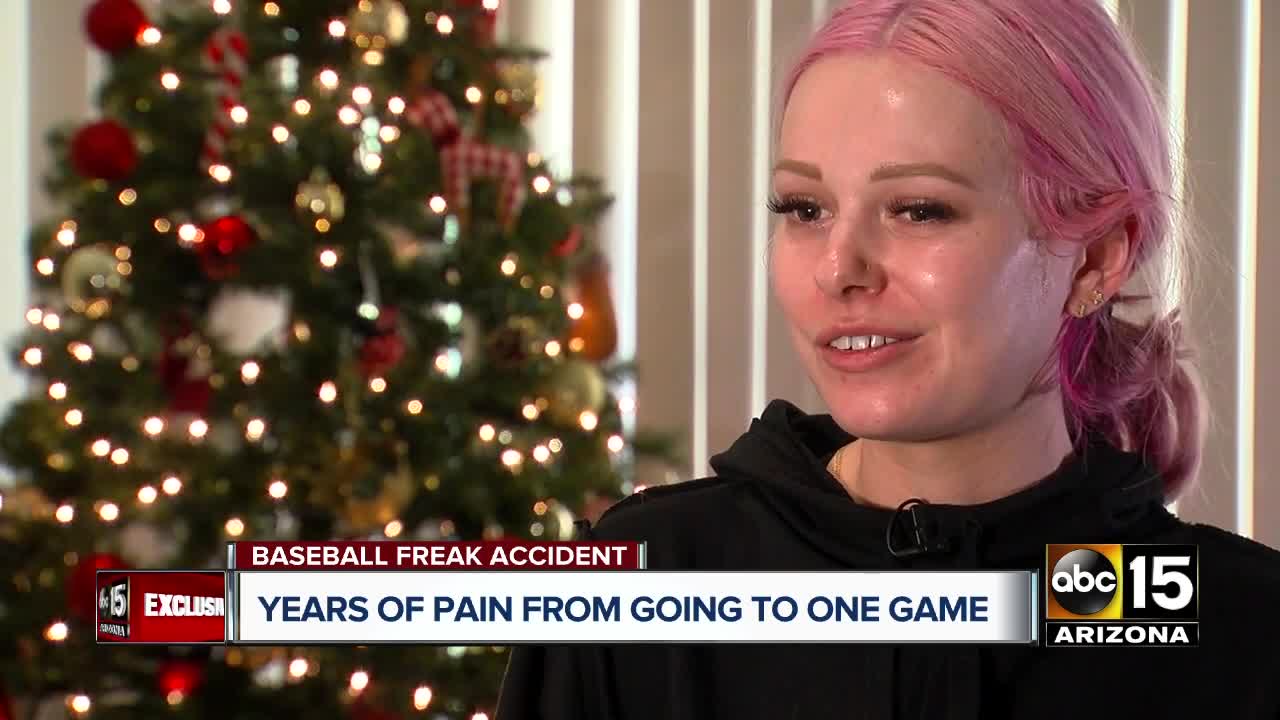 Years after being struck by a bat during a freak accident at a baseball game, a Valley woman is still recovering from the physical and mental pain.

It's been a long four years since the freak accident.

Allie Binkowski, who was 19 at the time, said she was a big Chicago Cubs fan. In March of 2015, she went to a game at Sloan Park with her friend Ellyn.

Only a few innings into the game, Binkowski saw a bat flying straight towards her.

“It hit the top of my head, it bounced off the seat and hit me in the back of my neck twice," she said.

Binkowski thought she was fine, but later, says she couldn't remember where she was, who she was with, or what sport they were watching.

After weeks of constant headaches, nausea, dozens of trips to the emergency room, and a ton of uncertainty, doctors told Allie she had a minor brain bleed.

"[They said] it’ll probably dissipate on its own, but you have some pretty bad head trauma," added Binkowski.

Four years later, it hasn't gone away. In fact, Allie says the injury has only caused more problems.

In 2019, Allie says she spent four months at the hospital. She wasn't able to eat or drink, and after some tests, doctors found almost 40 ulcers inside her stomach, a result of the medication she takes to keep her headaches at bay.

She was put on a feeding tube, and doctors performed surgery to "re-route" her stomach so that she could consume real food.

“I always think like if I just hadn’t gone to that game," said Binkowski, looking back at the incident that's led to years of suffering. “I think like too many people have already got hurt.”

Several fans have been seriously hurt by objects flung into the stands in recent years. In 2017, a young fan was hospitalized after being hit by a foul ball at Yankee Stadium in New York. In August of 2018, another woman was struck and killed by a foul ball at Dodger Stadium in California.

“I think the safety of the fans is the most important thing, especially because those are the people who they are getting a majority of their money from," she added.

Binkowski says she's happy to hear the MLB's finally acting on the issue. Commissioner Rob Manfred announced Wednesday the MLB plans to extend safety netting at all stadiums for the 2020 season.

“I’m glad you’re doing it now, and I hope nobody else gets injured," Binkowski said.

Binkowski says she considered legal action against the Chicago Cubs shortly after the incident, after having to pay thousands of dollars in medical bills.

“Probably upwards of $200,000 at least," she said. “We talked to lawyers and stuff like that and realized there’s nothing we could do about it.”

According to the MLB's website, each team has a printed liability disclaimer on the back of purchased tickets, ridding organizations of any fault if spectators are injured during games.

"Holder acknowledges and assumes all risks and dangers associated with Holder and/or Minor(s) (i) being a spectator before, during, and after a baseball game... including specifically (but not exclusively) the danger of being injured by thrown bats; bat fragments; thrown or batted balls..."