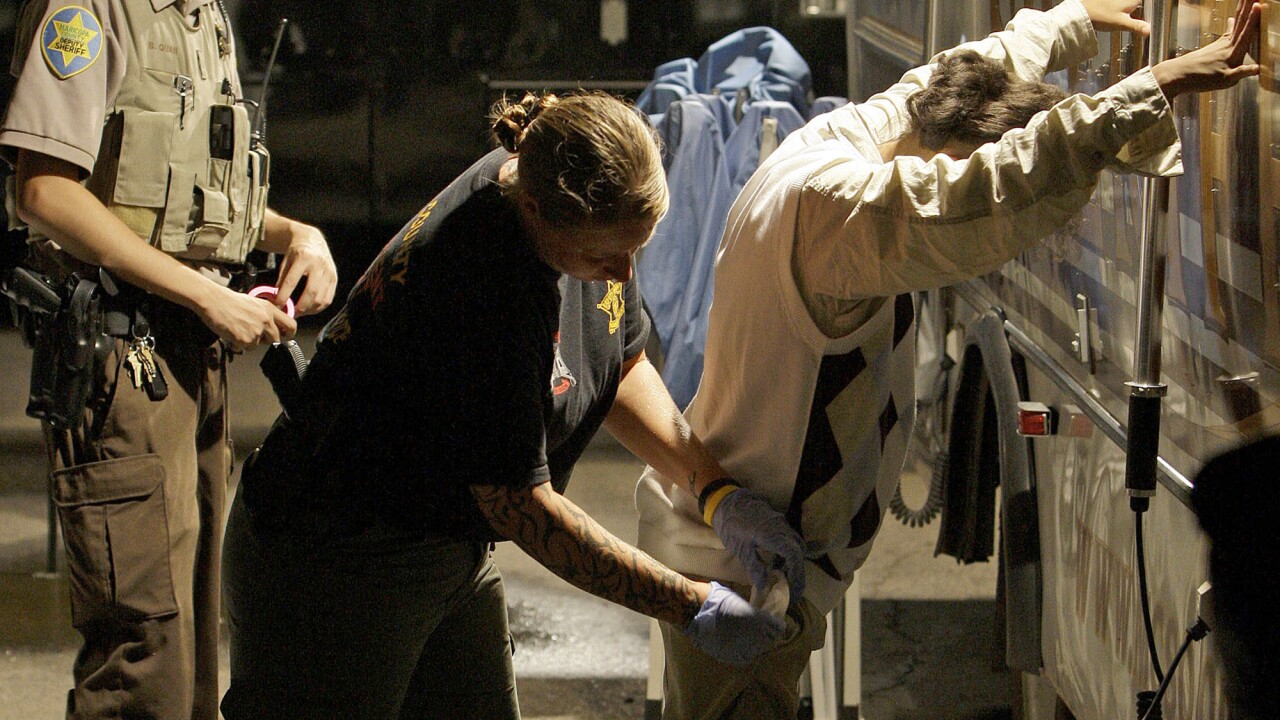 Ross D. Franklin/AP
FILE - This July 29, 2010, file photo, shows sheriff's deputies in Maricopa County, Arizona, frisking a suspect in one of Sheriff Joe Arpaio's traffic patrols that targeted immigrants. Officers at the sheriff's office in metro Phoenix have made 52% fewer traffic stops in the years since a judge concluded they had racially profiled Latinos in then-Sheriff Joe Arpaio’s immigration patrols. Arpaio’s successor, Sheriff Paul Penzone, and others tell The Associated Press that the decrease is driven by officers’ fears that they’ll be unfairly scrutinized in a court-ordered overhaul that’s aimed at ridding the agency of its biased policing. (AP Photo/Ross D. Franklin, File)

PHOENIX — PHOENIX (AP) -- Traffic stops by sheriff's deputies in metropolitan Phoenix have dropped by more than half since a federal judge found the department was racially profiling Latinos in then-Sheriff Joe Arpaio's immigration crackdowns, and ordered a massive overhaul to rid it of biased policing.

With the agency still under court supervision, deputies worry their reasons for pulling over motorists will be unfairly scrutinized or they'll face internal affairs investigations, according to Arpaio's successor, Sheriff Paul Penzone, and several other people interviewed.

"It all stems from this fear and mentality that the court orders were intended to do harm to the office, instead of improving the quality of the office," Penzone told The Associated Press.

Traffic stops by Maricopa County sheriff's deputies have fallen 52% from 2015 to 2018, according to figures provided to the AP by the department.

The dramatic decline -- from 31,700 stops in 2015 to 15,200 in 2018 -- raises questions about whether officers are missing evidence of illegal drugs, burglaries and other crimes that are sometimes discovered when pulling over motorists.

Penzone conceded officers may be missing criminal activity but emphasized it's unacceptable for them to back away from their bread-and-butter duties.

The latest publicly available traffic-stop analysis for the agency by Arizona State University criminal justice researchers found deputies have made improvements but are still more likely to search and arrest Hispanic drivers than white drivers.

Brad Ruehle, president of a group representing the sheriff's deputies, declined to comment on the decrease in traffic stop.

Others said it's normal for enforcement numbers to decline after a major ruling involving law enforcement.

The agency has been under court supervision since a judge concluded in 2013 that sheriff's deputies racially profiled Latinos in Arpaio's traffic patrols that targeted immigrants. The traffic stop figures go back only to 2015 because the agency adopted a new record-keeping system, and earlier figures don't contain enough detail to make a comparison.

The overhaul includes retraining officers on making constitutional stops, establishing an alert system to spot problematic behavior by officers, equipping deputies with body cameras and holding interventions with officers flagged for having statistical differences from their peers in how they treated Latinos.

The judge in the profiling case also ordered an extensive overhaul of the agency's internal affairs operations, which under Arpaio's leadership had been criticized for biased decision-making that allowed sheriff's officials to escape accountability.

While the agency is improving its compliance with the overhaul, the traffic-stop analysis covering encounters with motorists from July 2016 through June 2017 still found Hispanic drivers are more likely to be searched and arrested by deputies than white drivers.

The average length of stops for Hispanic drivers is three minutes longer than for white drivers. John Shjarback, a criminal justice professor at the University of Texas at El Paso, said it's normal to see a drop in enforcement numbers after a major court decision or a major event involving a police agency, such as a high-profile shooting involving officers.

New York saw a decline in stops after a judge ruled in 2013 that the city's practice of stopping and frisking people without justification violated the civil rights of minorities.

Shjarback said it's an open question among researchers about whether such drops in enforcement lead to increases in crime.

David A. Harris, a law professor at the University of Pittsburgh who studies racial profiling and wrote a book on the subject, said such decreases are the result of agencies moving away from blanket-enforcement approaches that emphasize the volume of arrests, not the quality of arrests.

Harris said officers are being forced to do better work.

"Now, they actually have to think about whether that's a good idea, and I don't think that's a bad idea at all," Harris said.

Joe Clure, executive director of the Arizona Police Association, which advocates on issues affecting officers, said Maricopa County sheriff's deputies have complained to him for years about the court supervision.

Clure said deputies' self-preservation instincts kick in when they think they are being unfairly scrutinized.

"It's just human nature," Clure said. "You don't want to do anything to get caught under the microscope."

The hundreds of internal affairs investigations that have been launched also are discouraging the sheriff's patrol deputies and jail officers from taking the initiative in their work, Clure said.

Detention officers, for instance, are doing fewer searches of inmates and cells because they fear being targeted in protracted internal investigations that could make it harder for them to find work at other police agencies, Clure said.

"The reality is that Judge (Murray) Snow is the actual sheriff in Maricopa County right now," Clure said, referring to the federal judge who delivered the racial profiling verdict and ordered the agency overhaul.

State Sen. John Kavanagh, a former police officer who is an ally of Arpaio, said the traffic stop decrease means taxpayers aren't getting everything they paid for.

Kavanagh doesn't blame officers for making fewer stops but rather an oversight system that he said accuses deputies of being racist. He said it was easy to predict the result of officers facing what they see as unfair scrutiny: "You get less work." Kathy Brody, one of the American Civil Liberties Union attorneys leading the profiling case against the sheriff's office, said she wasn't advocating for the sheriff's office to make more traffic stops but said the trend is a poor reflection on the agency.

In the past, immigrant rights advocates had argued that the agency under Arpaio pulled over Latinos for minor traffic violations, such as having a broken tail light.

"Our view is that they should be pulling people over for things that can cause a danger to the community," Brody said.