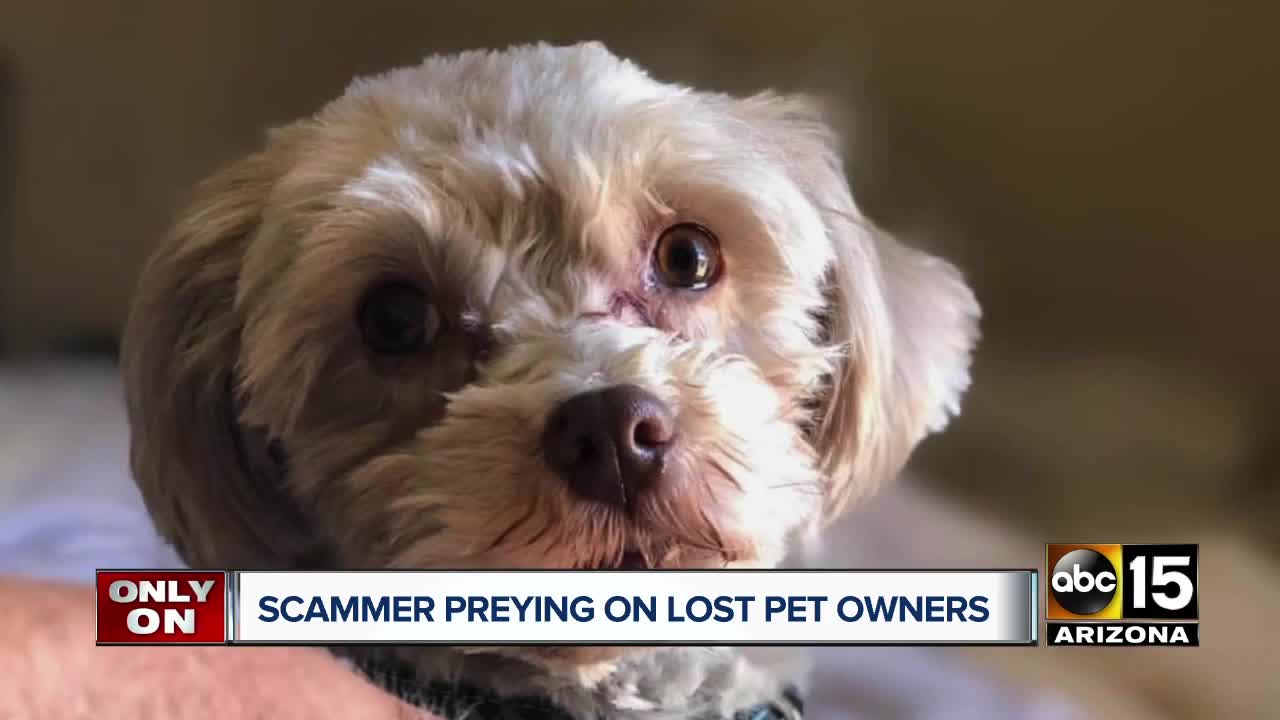 Multiple families are speaking out to warn the Valley community about a scammer they have encountered while searching for their lost pets. PHOENIX — Multiple families are speaking out to warn the Valley community about a scammer they have encountered while searching for their lost pets.

The suspect, in this case, seems to be preying on those who have lost their dogs. All of the families who have come forward so far say they posted information, including pictures of their lost pets on the Facebook page Straydar.

It is a social media page dedicated to helping reunite lost animals with their families.

The scam artist is preying on people's emotions, and fears said April Foltz, who lost her dog Autumn while she was in the care of a pet sitter while the family was out of town.

Foltz calls it a devastating loss for their family. Months later, she got a text from a Little Rock, Arkansas phone number saying "hey, I think I have your dog."

"I was ecstatic. I was like somebody's got my dog; I was so excited," said Foltz.

She hoped this was the big break they had been waiting for, to find Autumn, but then her guard went up.

The quickly realized, the mystery man's motive was money.

When he realized Foltz wasn't about to bite, she says he got aggressive and made comments indicating she didn't care about her dog, and that he planned to keep her now.

The man also told Foltz and other victims that his grandfather had purchased the dog in Arizona and brought the pet to Arkansas to use as bait in a dogfighting ring, and he was willing to rescue the dog for them.

"To imagine your loved one being ripped to shreds by other dogs is mortifying, it's horrible," said Foltz.

She quickly learned she was not alone. Foltz heard from several other families who said a man with the same phone number had also reached out to them with a very similar story.

The texts started with, "Hey, I think I have your dog."

Terri Graves got that text after losing her dog, Bella. What the scammer did not know is that Bella was already home when he reached out to Graves.

Graves texted him back thinking maybe he had another lost dog that she could help reunite with their family.

"I had a friend who's dog looked just like Bella, and I thought well maybe this could be her dog," said Graves.

She says she understands the desperation one can feel after losing a pet.

"You want your dog back, so you're going to reach for any stars," said Graves.

Lauren Jiron also heard from the same man several months after losing her beloved blue-nosed pit bull, Achilles. Achilles got out while the family's home was under construction last September. Jiron says the past year has been devastating for their family as they miss their pet so much.

"I would have given any amount of money for my dog, and that's what he's preying on," said Jiron.

She was also told the man's "papaw" ran a fighting ring, and that her dog was "in a lot of danger," said Jiron.

The women are speaking out to warn others about this scammer and his methods. The phone number these women have received texts from is 501-891-7342. ABC15 attempted to call this number multiple times and left messages.

The women say someone is bound to fall for this scam, and want to make sure those who are suffering the loss of a lost pet are aware of those who want to prey on their sadness.

"You're taking somebody who's already so, so broken and you're just sticking a knife right in their heart, and you're turning it, it just kills. It is heartless," said Foltz.

The victims have filed police reports and have also reached out to police in Arkansas and the Arkansas attorney general's office to report this scam.

The Better Business Bureau warns there are many scammers out there who want to defraud a heartbroken pet owner to line their own pockets.

The Better Business Bureau provides the following tips to keep from falling victim to a pet loss scam:

1. If you must place an ad, include only essential information. Refrain from providing information about unique markings or physical attributes.

2. If you get a call from someone who claims to be out-of-state, ask them for a phone number where you can call them back.

3. If a caller claims to have your pet in their possession, ask them to describe something about the pet that wouldn’t be visible in pictures which may have been posted.

4. Never wire money to anyone you don’t know.

Also, make sure your pet is microchipped and secure all gates in your yard as that is how the majority of lost pets end up on the streets.