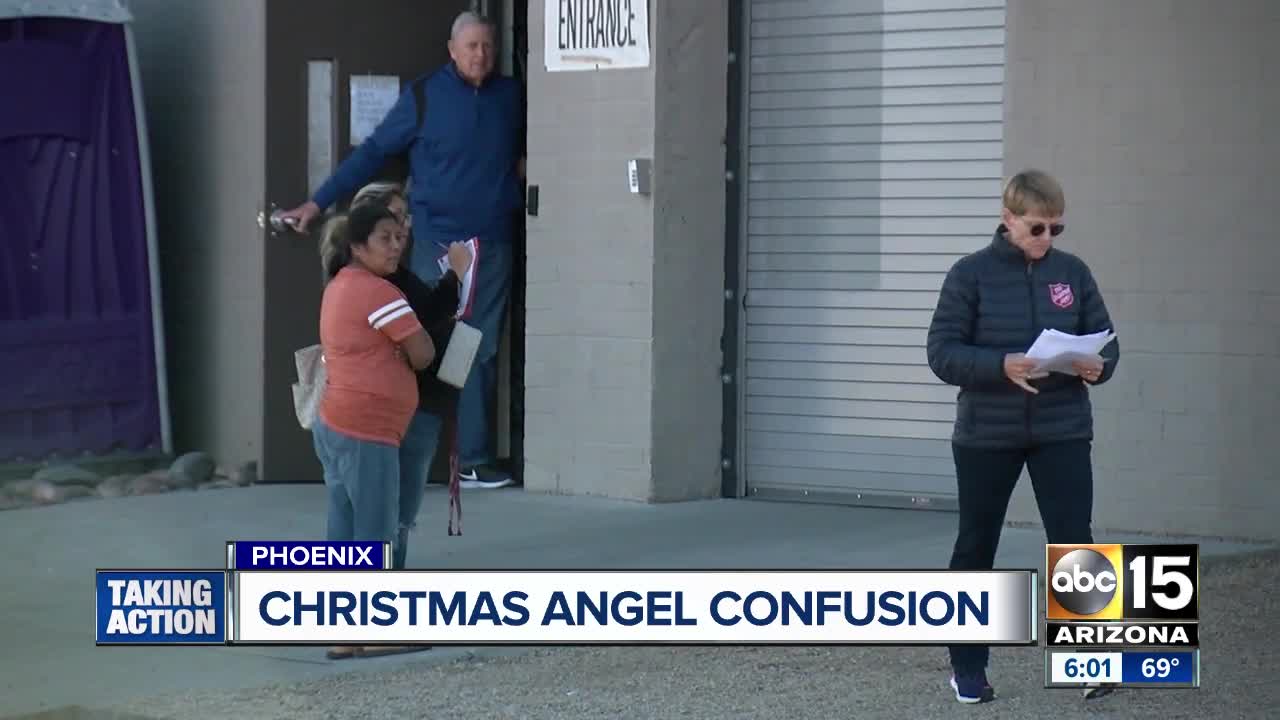 After a mishap over gift applications, the Salvation Army in Phoenix was able to have families fill out applications on the spot so they could still receive Christmas gifts.

PHOENIX — Salvation Army staff were greeted by chaos and confusion outside the Phoenix warehouse on Christmas Eve morning, as dozens of families showed up asking for toys, to put under the tree for their children.

Families who contacted ABC15 said they had heard Monday was the day to get toys from the Salvation Army, but the staff at the organization said there must have been a miscommunication.

"There may have been a situation last year where some people got toys after our distribution happened because we had toys left over, so maybe just the rumor mill the grapevine, whatever it might be," said Scott Johnson, the Public Relations Manager for the Salvation Army.

Emmanuel Velgara was one of many parents who showed up, expecting to leave with a bag full of gifts for his children. Velgara said several parents, including him, were frustrated when they were told they could not get any toys as the application process had closed and they were not on the list.

"We were told to leave. They called the police. The officer was told to call for back up, and that's why I told him you know before stuff gets out of hand, you're inciting a riot, no one else wants that here," said Velgara.

ABC15 asked Velgara why he had not filled out an application like thousands of other residents in October and November when the Salvation Army starts taking in applications for their Christmas Angel program.

Velgara said he had been in the hospital and was not aware of the process. Another single mother who showed up with a car full of children to pick up toys said she came after hearing the Salvation Army was handing out toys to families today. She too had not filled out an application for the program and said she was too busy and did not know about the process.

"It's been explained to everybody that this is a program you need to sign up for in advance, so hopefully nothing like this will happen again," said Johnson.

He stressed that it was important families in need fill out the applications on time, so the Salvation Army could ensure they had enough toys to hand out, and they could also make sure they were able to get your children toys that they specifically wanted. The application process was also a way to ensure that families who were getting assistance met the required poverty guidelines.

The situation was resolved after Salvation Army staff started taking applications on the spot and letting those who showed up get a bag full of toys for their children.

Johnson said families who still needed a toy could come to their annual Christmas dinner at the Phoenix Convention Center on Christmas day. Santa would be on hand to gift one toy to every child in attendance.

About 5,000 people are expected to attend the Christmas dinner, and another 2,500 meals served to those who are homebound.

The dinner will take place on the lower level of the Phoenix Convention Center's West building and will begin at 9 a.m. with meal service from 11:30 a.m. to 1 p.m.