PD: Walmart shoplifting and carjacking in Tempe leads to serious crash in Scottsdale after pursuit 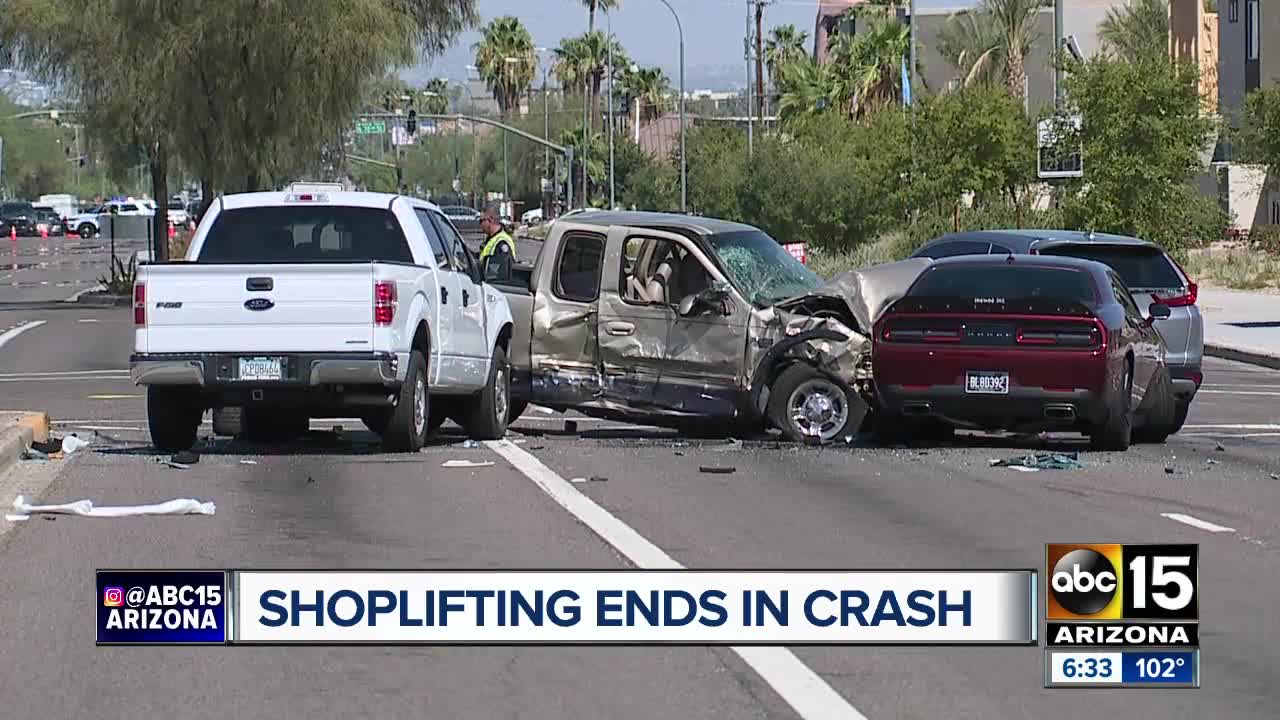 SCOTTSDALE, AZ — Police agencies are investigating after a shoplifting in Tempe led to a carjacking and pursuit, which ended in a serious multi-vehicle crash in Scottsdale on Friday afternoon.

According to Tempe police, officers responded to the Walmart Supercenter near Priest Drive and Elliot Road for reports of a shoplifting. When officers arrived at the scene, a witness identified the vehicle of the suspect involved in the shoplifting, which officers saw trying to leave the area. A patrol officer followed, and while attempting to stop the suspect, saw an occupant trying to push someone out of the moving vehicle.

Police say the vehicle did not stop for the officer, and after a brief pursuit was last seen exiting the Loop 202 at Scottsdale Road. Another patrol officer eventually spotted the vehicle driving northbound on Scottsdale Road, and due to the erratic driving behavior, advised all Tempe officers to terminate the pursuit. The officer then notified the Scottsdale Police Department the suspect vehicle was heading into their city.

A short time later, a serious multi-vehicle crash was reported at 68th Street and McDowell Road involving the vehicle connected to the initial shoplifting, according to police.

Scottsdale police say before the crash, officers received an "attempt to locate" broadcast from Tempe, referring to a tan pickup truck involved in a "shoplifting and unlawful flight" in their city. Police say five minutes after the broadcast, numerous calls were received regarding a five-vehicle crash at the intersection of 68th Street and McDowell Road. Witnesses told police a tan pickup truck was involved and was seen driving westbound on McDowell Road at dangerous speeds.

According to police, the truck ran the red light and struck a silver SUV that was heading southbound on 68th Street, then struck three other vehicles before coming to a stop. A man and woman reportedly ran from the truck but were quickly detained with the assistance of a Mesa Police Department helicopter.

The driver of the silver SUV was taken to the hospital with life-threatening injuries. The intersection was closed for several hours while officers investigated.

Tempe police said Scottsdale officers took the man and woman from the suspect vehicle into custody. Those two were treated for non-life threatening injuries. During their investigation, detectives determined that the occupant the patrol officer saw being pushed in the suspect vehicle earlier was a victim of carjacking after the shoplifting at Walmart, and was not involved in the crime. Police were not able to specify who the victim was.

Tempe police say this is a fluid and ongoing investigation, and are working with Scottsdale police who are handling the collision investigation.

This is a developing story. Stay with ABC15 and abc15.com for updates as they become available.