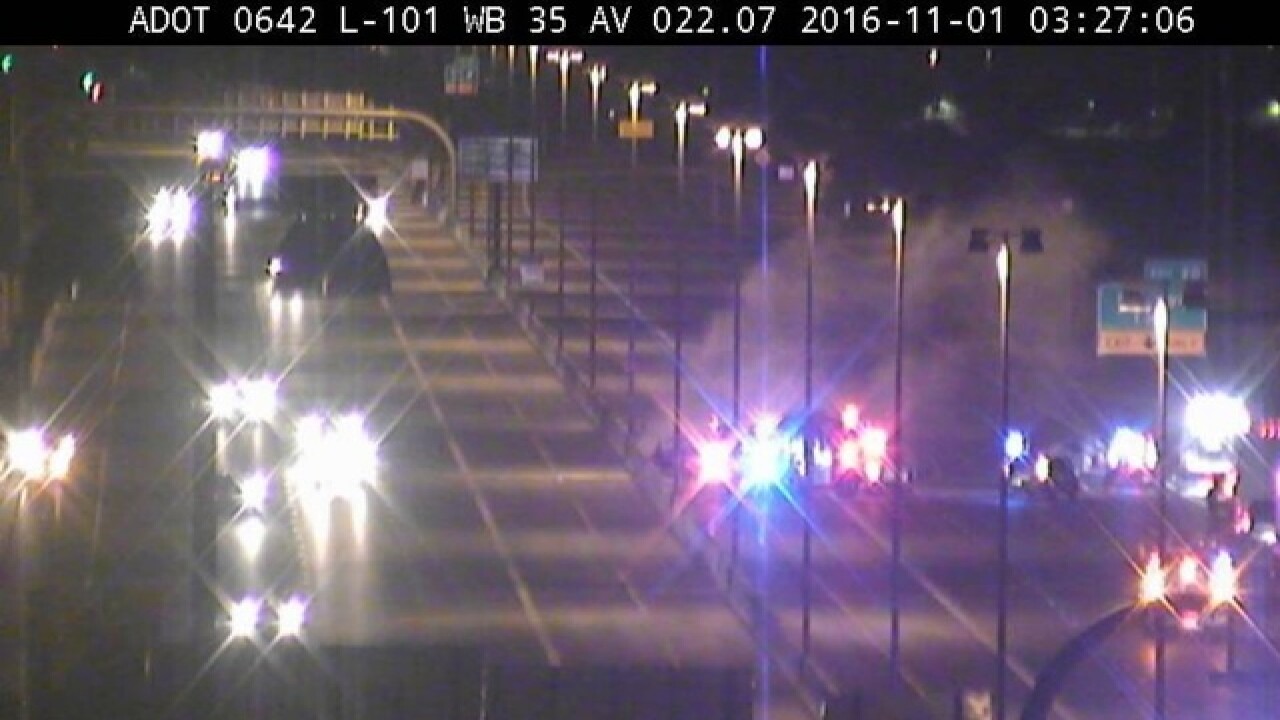 Loop 101 in north Phoenix has reopened after a deadly wrong-way crash early Tuesday.

The two-vehicle crash happened at Loop 101 and 35th Avenue just after 3 a.m.

The Arizona Department of Public Safety (DPS) said troopers responded to the area after receiving reports of a wrong-way driver traveling eastbound in the westbound lanes of Loop 101 near 51st Avenue.

A couple minutes later, troopers received a report of a head-on crash on westbound Loop 101 and 35th Avenue. When troopers arrived on the scene, they found two vehicles had collided, one of them catching fire.

According to DPS, both drivers were pronounced dead at the scene.

The names of the drivers have not been released. The driver of the vehicle that was hit was a 22-year-old man. DPS said the wrong-way driver was also a male, and confirmed impairment is believed to have been a factor.

DPS says the wrong way driver was going so fast, investigators can't even make out the type of car he was in #abc15

According to DPS, by July, they received 840 calls about wrong-way drivers. In these cases, 51 people were arrested for alleged drunken driving. So far this year, DPS has investigated 23 incidents statewide where the wrong-way drivers crashed.

For the last year, the Arizona Department of Transportation (ADOT) has been working to prevent this by developing a technology that would use existing sensors on the highway to detect wrong way drivers in hopes of alerting DPS and drivers by using the electronic highway signs.

"We've been using this year to really develop the system. We have to move on to final design,” said Doug Nintzel, ADOT spokesperson.

ADOT hopes to test this technology on a stretch of the I-17 in Phoenix sometime in 2017.

But people want to know — why not use spike strips?

"They don’t hold up well," Nintzel said. "They really are designed to work in slow speed applications like a parking garage or a park entrance."

The tragedy with this morning's fatal wrong-way crash — DPS said several witnesses spotted the suspected impaired driver at a Circle K, and tried to stop him.

"We had multiple witnesses who acted very heroically and confronted that individual trying to get him not to drive away,” said Capt. Tim Mason with the Arizona Department of Public Safety.

But preventing a large number of these wrong way crashes comes down to responsibility, when according to DPS, in 65 percent of these wrong-way driving crashes, the driver is impaired.