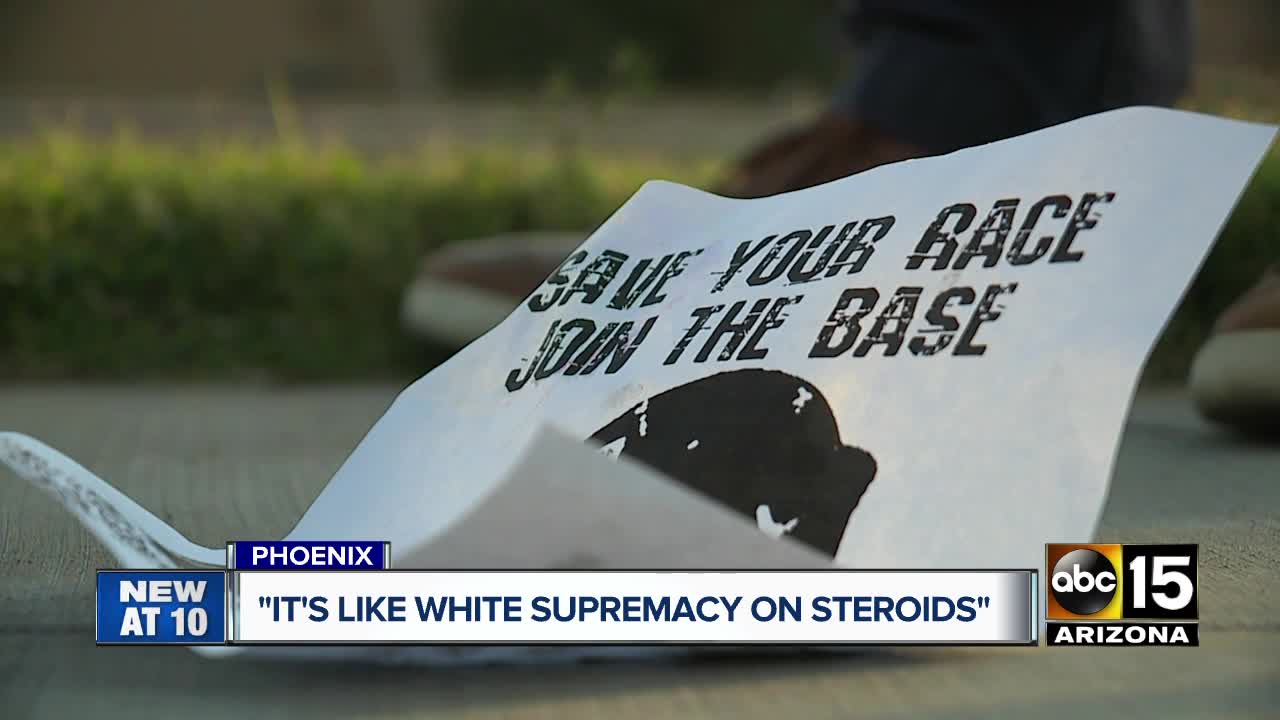 A woman was walking her dog when she noticed the piece of paper posted near 3rd Avenue and Latham. A woman was walking her dog when she noticed the piece of paper posted near 3rd Avenue and Latham.

"When I first saw it I thought it was for a video game," said Lori Shields. "It was completely glued on the back and set professionally on the lamp post."

After inspecting the flyer a little closer, she found it said, "Save your race, join The Base.'" Shields took it down. "It seemed a bit aggressive. A little World War II-ish. A little bit Nazi-ish, you could say."

Her intuition was not wrong, according to experts who study extremism.

"The Base is an international militant neo-Nazi organization, centered here in the U.S," said Joanna Mendelson, Senior Investigative Researcher for ADL’s Center on Extremism. "It emerged in mid-2018 [and] is essentially white supremacy on steroids."

The Base is known for telling its members to arm themselves and be ready for violence. "They espouse a deep hatred and are preparing themselves for a racial holy war," said Mendelson.

It is unclear what, if any, presence the group has in Phoenix. ABC15 reached out to the email address on the website but has not heard back at the time of publication. Regardless, experts say even a pamphlet is cause for concern.

"White supremacists spread their propaganda, in an attempt to recruit other individuals," said Mendelson.

"Propaganda and white supremacist leafleting is a rather low-level offense... but for law-enforcement, it can also signify the presence of this group."

Recently Mendelson says the group has begun to move from mostly online to the "real world engagement." Recent videos posted by the group show members posting flyers around the Boston College campus, and there are reports of an 18-year-old member who was recently arrested by the FBI for encouraging others to vandalize synagogues.

"There is a need to have an awareness of the group's potential presence in a city, but we must balance that with understanding that this might be a lone act," said Mendelson.

Shields called Phoenix police to report the flyer, but said the officer on the phone was not overly concerned. "They just took my name, didn’t want to see an image or really, I guess, care what the flyer looks like," said Shields. "I would’ve thought they maybe wanted to see the message."

A Phoenix police spokesperson told ABC15 they were passing along the information to specific investigators.

It is unlikely, even if they found the person responsible for posting the flyer, that they would be able to arrest and charge the individual. Now though, the group is on their radar.

"It’s concerning and the neighborhood needs to be aware of it." said Shields.