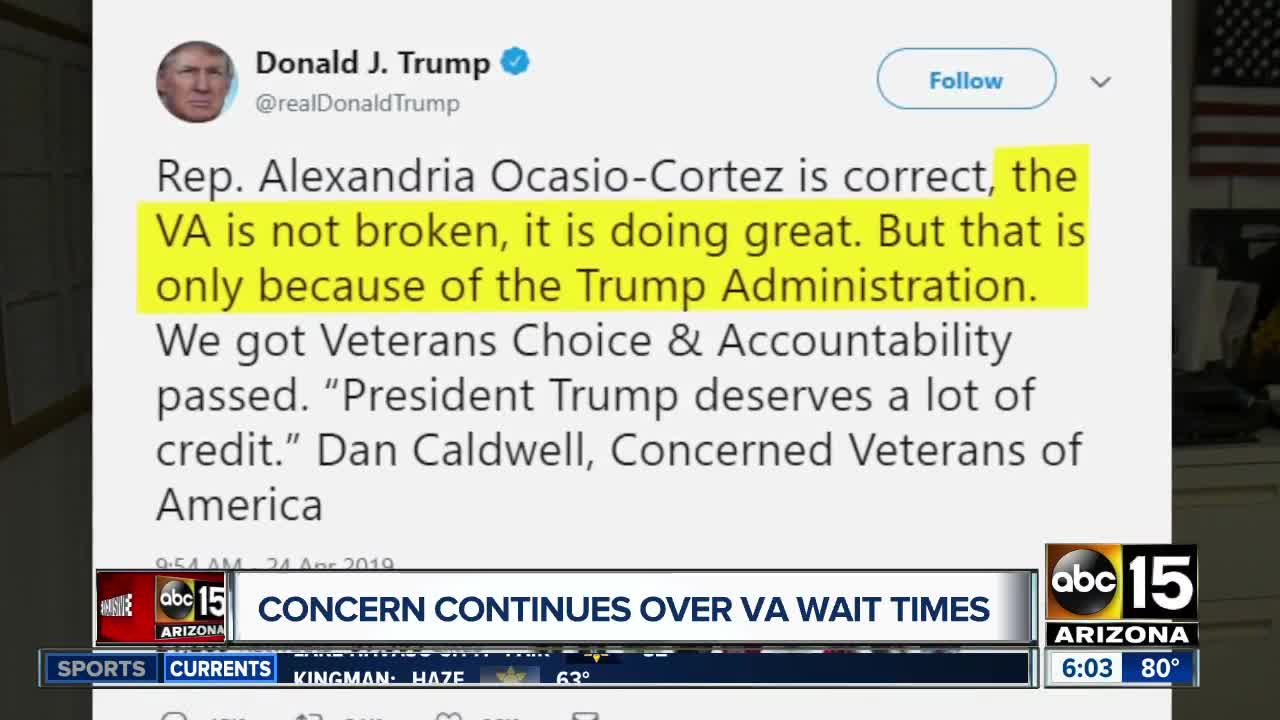 Some state leaders say many veterans are still being forced to wait almost a month for a doctor's visit at Arizona VA locations, despite President Trump's remarks that the VA system is "doing great." 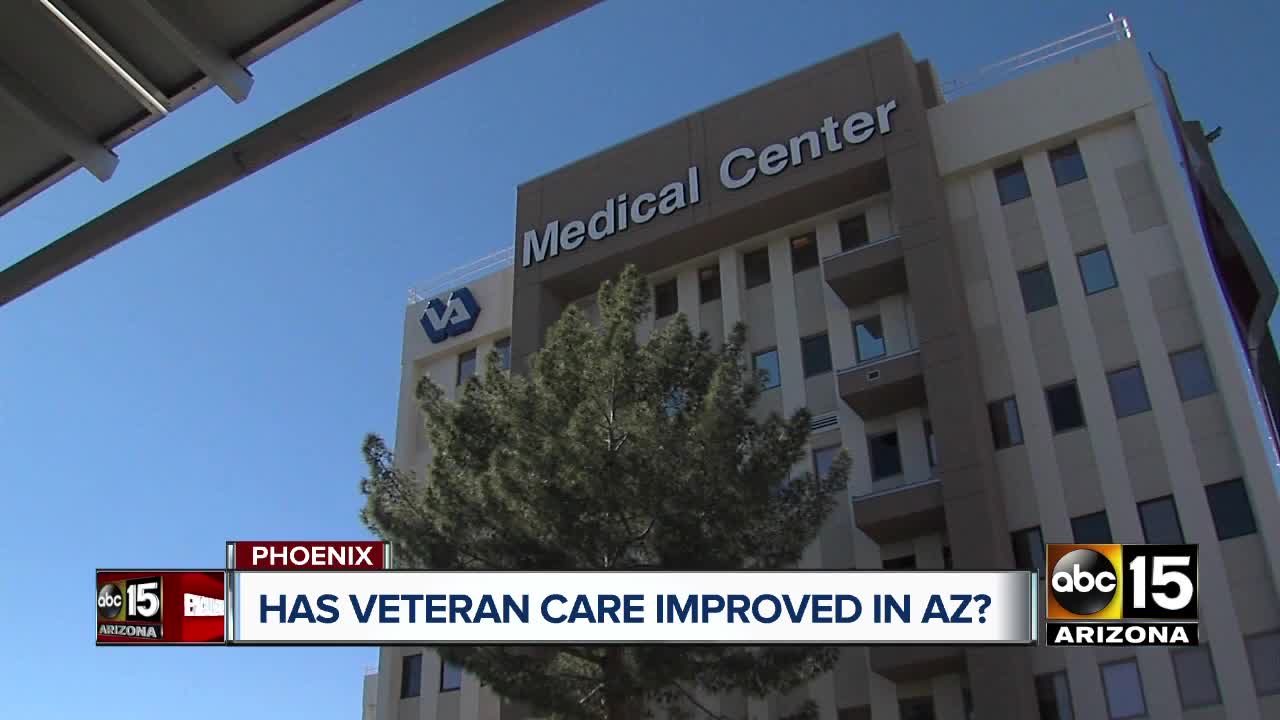 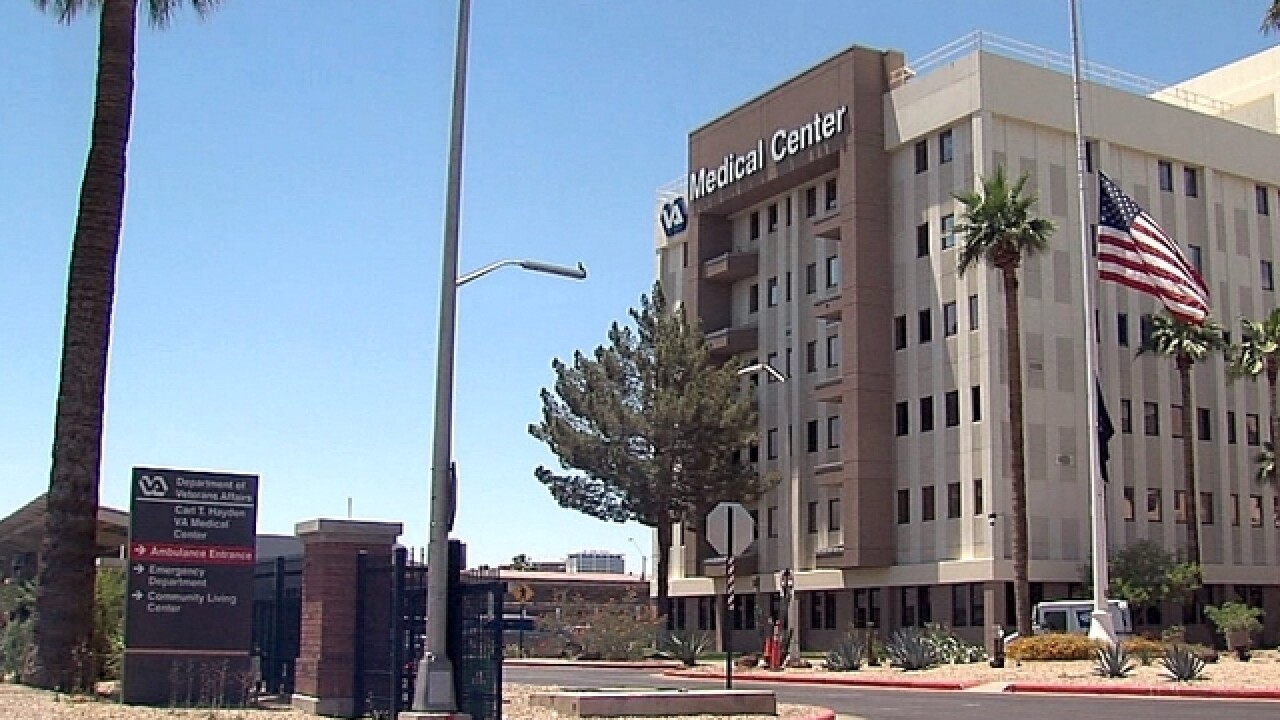 PHOENIX, AZ — Some state leaders say many veterans are still being forced to wait almost a month for a doctor's visit at Arizona VA locations, despite President Trump's remarks that the VA system is "doing great."

"The president said that the VA was working well and he had fixed it all," said Senator Kyrsten Sinema. "This is an area where there’s some polite disagreement. Here in Arizona, we have seen some modest improvements in some parts of the VA, but there are many veterans in Arizona who are still not getting the care they need.”

Sinema highlighted wait times that are outside of what's reasonable at VA facilities in Tuscon, Prescott, and Phoenix, as well as difficulties getting care for some veterans. "It takes longer for a veteran to get care in some cases than it takes for you or I to get care. That’s not fair," she added.

The wait time issue first made headlines in 2014, when officials discovered many patients were forced to wait more than 30 days to be seen, and reports allege some veterans were dying as a result.

A 2017 report from the Office of the Inspector General on the VA facility in Tuscon, AZ shows the number of patient appointments taking 30 days or more to schedule had increased from fiscal year 2015 to fiscal year 2016.

Earlier this year, The Department of Veteran Affairs cited a study completed by the Journal of the American Medical Association that contradicts the OIG's report. Instead, they say the study found wait times for new appointments were "equal or better than those in the private sector." The study says the average VA wait times across the U.S. in 2017 were 17.7 days, while the private sector average was 29.3 days- a 12-day difference.

The VA's website shows current wait times at each individual facility. Right now, the wait time for new patients to see a primary care doctor at the Phoenix location is 27 days.

In a statement sent Monday, the VA said 85 to 90 percent of its care was provided through outpatient clinics throughout the Valley and state. New patient primary care wait times for April 2019 at those facilities ranges from 6 days at its northeast clinic (near Frank Lloyd Wright and Via Linda) to 28 days at its northwest clinic (near Litchfield Road and Grand Avenue), according to data provided by a spokesperson. Those seeking a return appointment for primary care this moth are typically are waiting a few days to a week.

"We’ve got to do a couple of things to strengthen the VA so it’s providing adequate, timely and appropriate care," Sinema said. "But also make sure that we’re connecting with veterans before they leave service.”

“A lot of them are coming out of the program to some kind of addictions maybe or they just have a hard time assimilating back into society," said Vice-President Bill Connor. Connor served four years as in the Air Force, then over a decade for the National Guard. Now, he heads the organization helping once homeless vets get back on their feet.

“They usually have no income stream or anything to rely on," said Connor. "When we go in to deliver, it’s usually to an empty apartment.”

Last year, Veteran Furniture Center delivered furniture and other supplies for 380 veterans just getting back on their feet through the Housing and Urban Development-VA Supportive Housing (HUD-VASH) program.

The VA certifies each person has served in the armed forces and helps them find affordable housing. Connor says the organization uses the program to verify what veterans need help, and then deliver brand new furniture to their new homes.

“You really appreciate what you have cause these guys have absolutely nothing, most of them," said Connor.

Veteran Furniture Center uses donations and grant money to purchase new furniture that fits in the small apartments these veterans usually move into, and to make weekly deliveries.

To learn more or find out how you can help, you can visit their website.