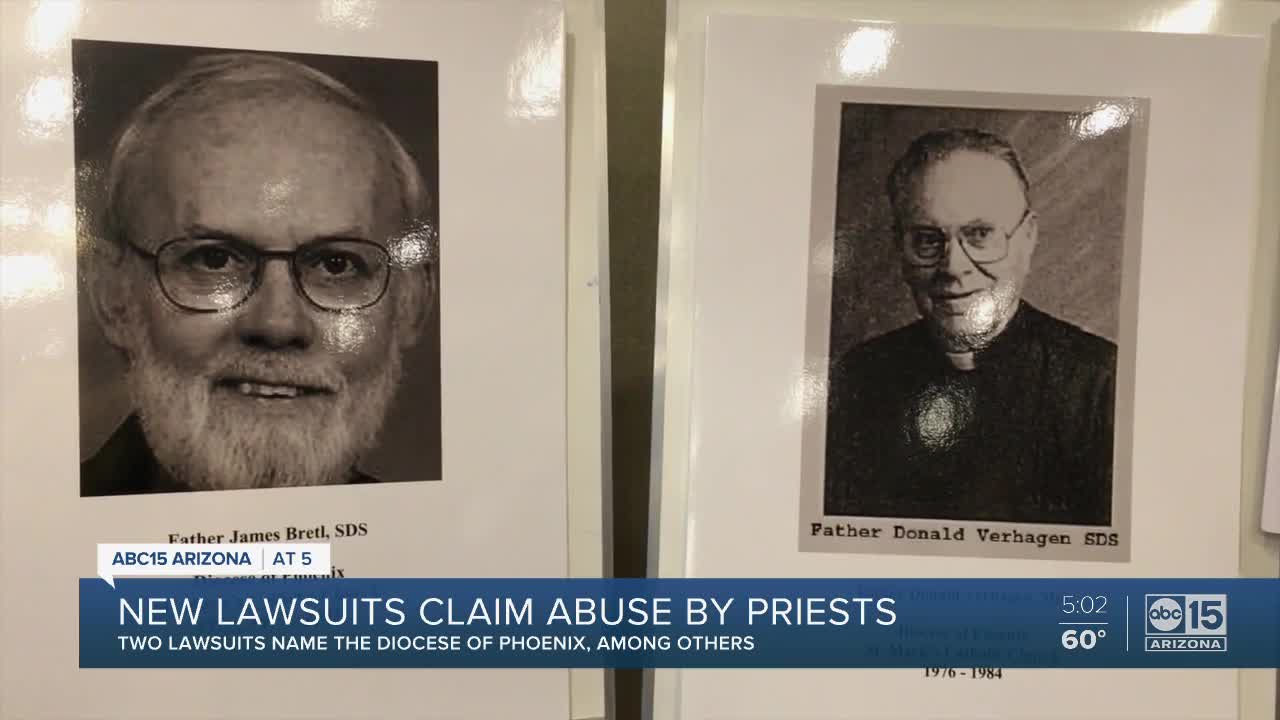 The lawsuits, filed by unnamed plaintiffs, allege abuse by priests at St. Mark Roman Catholic Parish in Phoenix, when they were stationed there in the late 1970s and early 1980's. The lawsuit names the Diocese of Phoenix, among others.

"That's what these lawsuits are about," said Jeff Anderson, an attorney for the plaintiffs. "The Catholic Diocese and the head of the Salvatorian order transferring these priests and allowing predators access to kids."

"We want the lawsuits to allow the full disclosure of all the offenders known to the top officials that have been hidden and kept secret," Anderson said.

One of the lawsuits involves allegations against Fr. Joseph Henn. He was caught in Italy last year and brought back to Arizona, after he disappeared in 2005 while facing sexual abuse charges, according to the Diocese of Phoenix.

The other lawsuit names two priests who attorneys for the plaintiffs say have not been publicly accused before. They are Fr. Donald Verhagen and Fr. James Bretl. Both have since passed away.

Also on Tuesday, a man who filed a separate lawsuit in 2016 alleging abuse by a priest at St. Mark, spoke publicly for the first time. Michael Borst's lawsuit is ongoing and alleges abuse by Fr. Dennis Pecore.

"I am proud to stand with the rest of the victims and survivors," Borst said. "Come forward...there is help."

The Diocese of Phoenix did not make anyone available for an on-camera interview, but issued the following statement Tuesday:

"We are reviewing the information released today at the press conference. Information about Pecore and Henn, two former Salvatorian priests, may be found here: https://dphx.org/youth-protection/community-notification-statements.

The Diocese of Phoenix has not been served or had the opportunity to review the allegations against two of the Salvatorian priests — Fr. Donald R. Verhagen and Fr. James Bretl, both deceased — identified today during the press conference, so we cannot comment directly on the claims, but can confirm that no prior allegations against either has ever been brought to the Diocese of Phoenix. Our understanding is that the claims made in today’s press conference relate to cases that date back to the late 1970s or early 1980s.

The Diocese of Phoenix is committed to providing a safe environment where it values and honors every individual as created in the image and likeness of God. Great efforts have been made to put systems into place to keep our young people safe, and we will continue to work in close cooperation with law enforcement to uphold the principles of accountability and justice.

We encourage anyone who has been a victim of abuse to contact local law enforcement. For additional information about support services for those who have been abused, please contact the Office of Child and Youth Protection at (602) 354-2396.

Bringing to light this dark period in our history is important so that we can protect the vulnerable, bring healing to the wounded, and keep people safe and focused on Jesus Christ."

A representative for the Diocese of Phoenix also noted a list of clergy who have been laicized and/or removed from ministry due to a credible accusation of sexual misconduct with a minor can be found online.