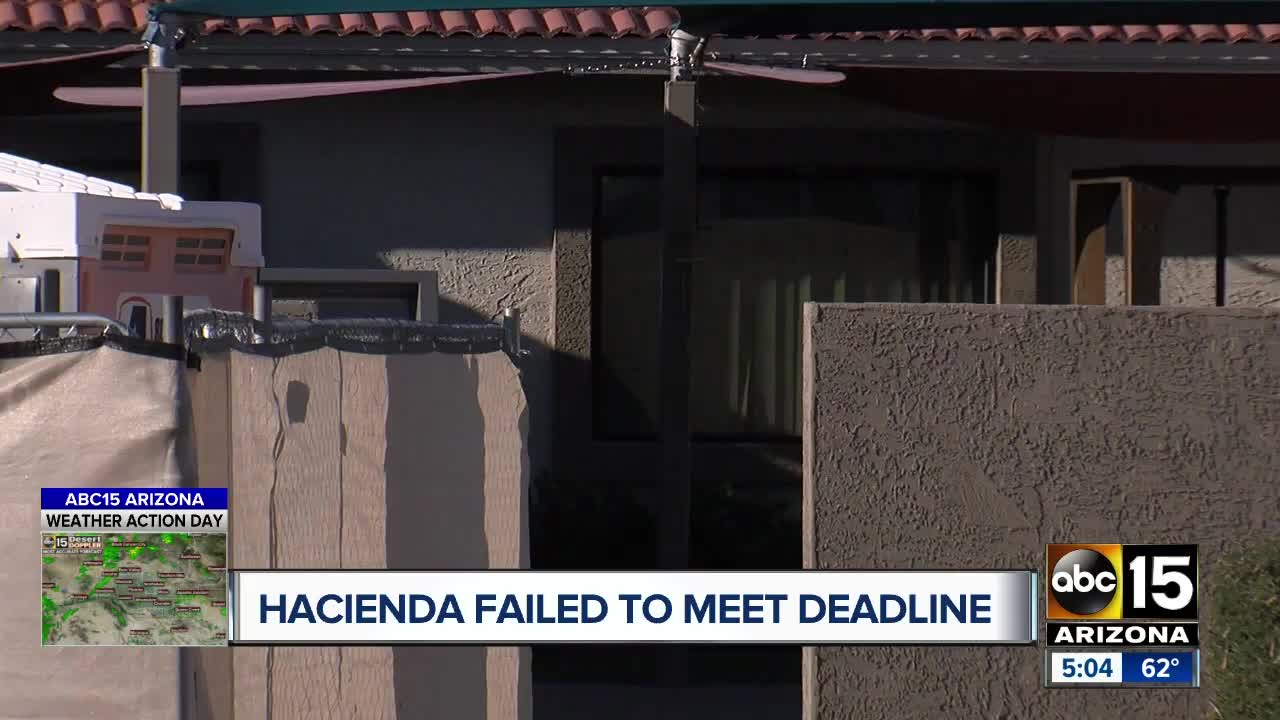 PHOENIX — Two state agencies say Hacienda HealthCare has failed to meet a deadline to appoint a third party company to manage its operations, leading Governor Doug Ducey to call for charges against the company.

The appointment of an outside company to take over operations at its intermediate care and skilled nursing facilities was one of several demands the state made of Hacienda in mid-January, after an incapacitated woman in the facility's care gave birth on December 29. The overseer was supposed to have been in place by January 30, according to the state's demands.

At the end of January, Hacienda and Indiana-based Benchmark Human Services announced they had partnered to meet the requirement. At the time, Hacienda said it was "fully committed to working with Benchmark to further improve the care and safety of our patients."

In a joint statement issued Tuesday, the Arizona Health Care Cost Containment System and the Department of Economic Security said the two companies had "failed to reach a definitive agreement" and that Benchmark had yet to arrive at Hacienda's facilities to assume operations.

"Hacienda has not meet the directive given to them by state agencies to ensure the ongoing safety of all patients," the statement said. "As such, the agencies have demanded that Hacienda outline, in detail, their plan to comply with all directives issued no later than the end of this week."

Benchmark Human Services issued the following statement regarding the AHCCCS and DES joint-statement:

"Benchmark had six highly qualified staff on the grounds at Hacienda last week working on a root cause analysis and quality review per State directives. Additionally, we identified and brought on board two administrators to oversee the ICF and Skilled Nursing facilities. At the end of the week, when an agreement could not be reached, we reluctantly stopped this very important effort. Benchmark greatly hopes a solution is found that ensures the quality of care and safety of the residents at Hacienda."

According to a spokesperson for Benchmark, the company is no longer on sit at Hacienda.

"The third party manager was agreed to by Hacienda and it was not optional. So, I’m working with state agencies, so we can take the most aggressive action possible," said Ducey. "Our number one concern is for the patients that are inside, and to make sure they're cared for so I'm going to work with state agencies on this process."

Ducey also wrote a letter to Attorney General Mark Brnovich urging him to investigate and seek charges against Hacienda and its board of directors for its handling of the woman's rape, "any other actions that constitute violations" of Arizona law regarding protective services, as well as a civil rights investigation into the company's work culture and any instances of financial fraud.

In the governor's letter, he also says part of the reason for the lack of a formal agreement between Hacienda and Benchmark may come down to money.

"It has come to my attention over the weekend that Hacienda claims it cannot afford the cost of Benchmark, with anticipated costs of $500,000, even though according to tax documents, it paid the prior CEO an almost $600,000 salary," Ducey said. "These facts do not add up."

A Hacienda statement sent Tuesday afternoon said the company was unable to reach a final contract with Benchmark in the timeframe set by the state, and that the vetting process was still ongoing.

The suspect charged with raping the woman, Nathan Sutherland, entered a plea of not guilty in a Tuesday court appearance.