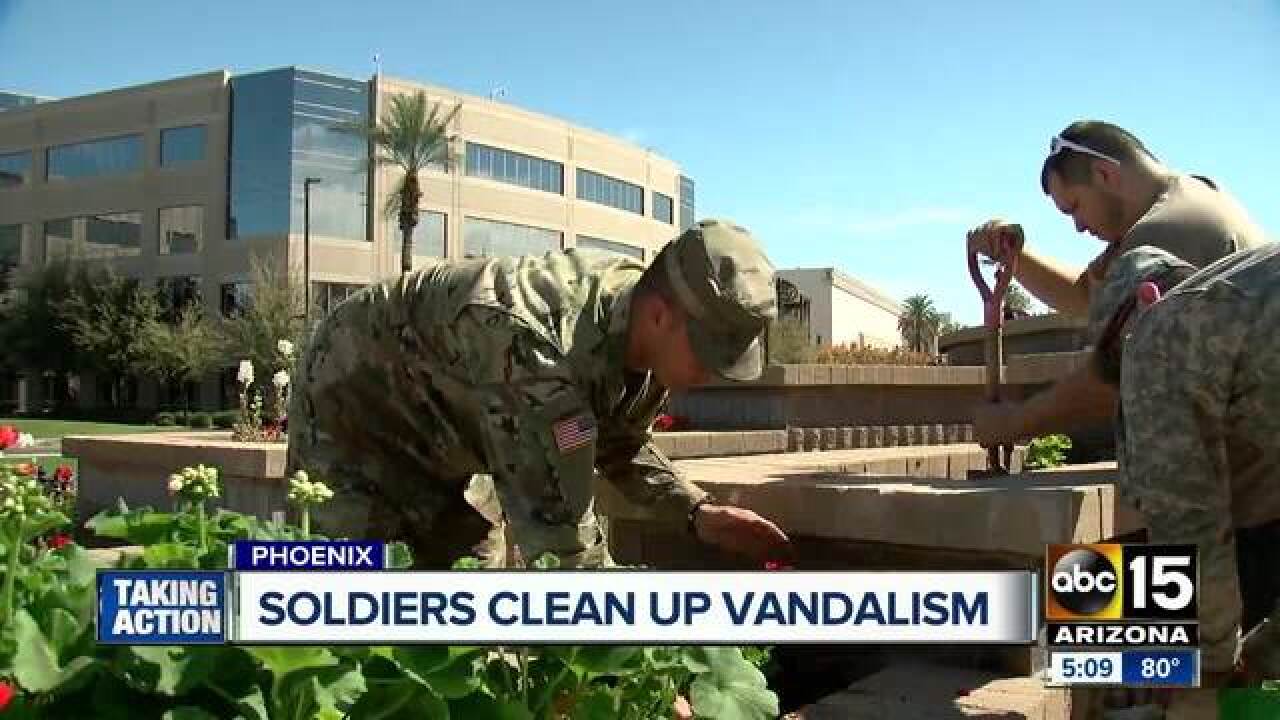 A group of veterans and soldiers have taken action to restore a vandalized Valley war memorial to its former glory.

This comes after a woman was caught destroying flower beds around the U.S.S. Arizona war memorial right by the state capitol building last week.

The video hit a raw nerve for many veterans and Valley residents who come to the park to reflect and honor the lives of friends, comrades, and family members lost during the war.

Josh Eggerstedt said he was visiting the memorial to help clean up trash with other veterans and soldiers when they noticed all of the damage.

"How would you feel if one of your family members died on the U.S.S. Arizona and you come walking up to the park and notice it's vandalized. You're going to think nobody cares."

The group visited Home Depot, and Lowe's to ask for donations to help restore the area to its former glory.

Tevin Freeman, an assistant manager at the Home Depot store in Tempe said it was a no-brainer, they like to give back to the community, and this was the perfect opportunity.

Freeman said Home Depot donated about $160 worth of flowers for the cause.

Eggerstedt said they were able to get a donation of potting soil from Lowe's.

With help from ground maintenance crews from the Arizona Department of Administration, the group rolled up their sleeves to plant flowers, and paint some of the older memorials at the park.

"We could have easily let the state employees just come out and do it all, but we wanted everybody to know we're out here, and there are people who are willing to help," Eggerstedt said.

Rebecca Emmons, who was visiting the park with her children said she appreciated the group's effort.

"I think of this as sacred ground. Even though we're not on the site where people died, it's in memory of them." Emmons said.

"They did a great job. They are beautiful. They were put in so well; you can't even tell they were just put in."

Arizona Department of Public Safety officials said the woman behind the vandalism is mentally unstable and was found to have drugs on her.

She was involuntarily admitted to a facility. Charges against her are pending at this time.

Veteran Sean Eggerstedt said he felt compassion for the woman.

"I would rather see them get the help they need rather than go to jail for this because this is somebody who needs help," Eggerstedt said.