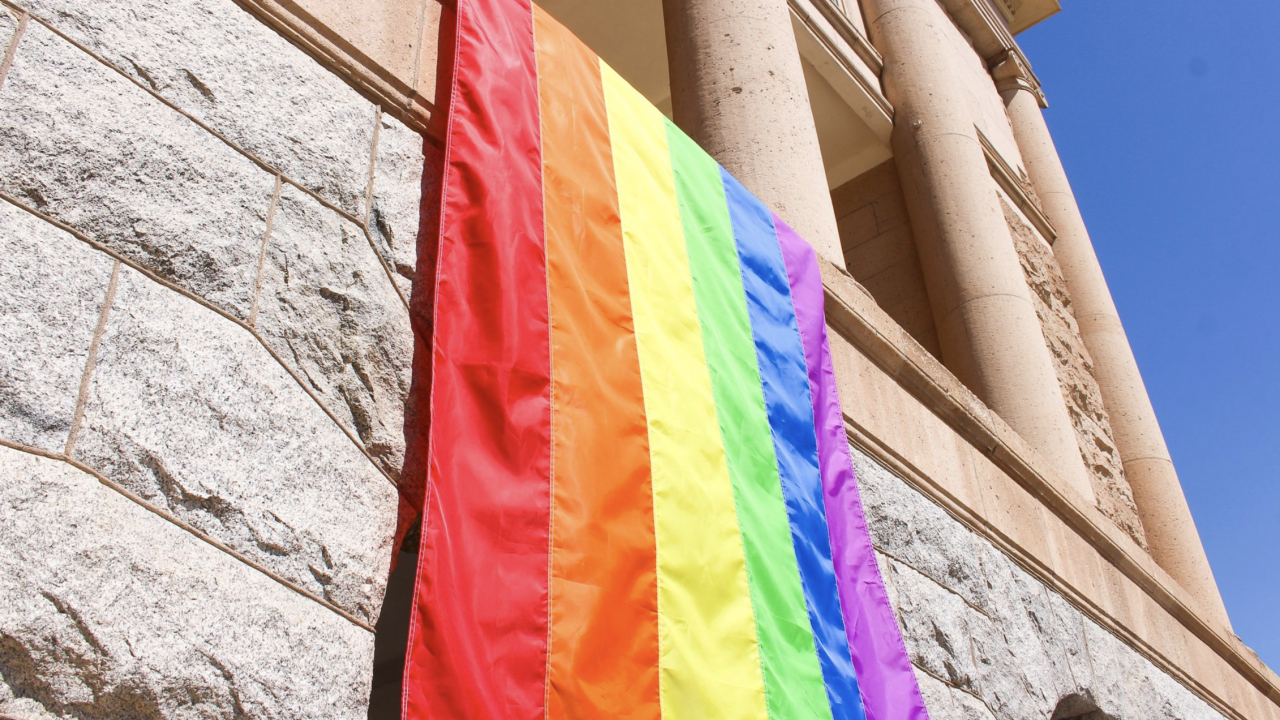 PHOENIX, AZ — It's the 50th anniversary of the Stonewall Uprising, and the end of Pride Month. It's why Arizona's Secretary of State said she wanted to drape the gay pride flag down the patio of the Old Capitol building for the first time in history.

“Sometimes folks feel not seen," said Secretary Katie Hobbs. "There haven’t been officials in high office that celebrate them.”

To commemorate the 50th Anniversary of the #Stonewall Uprising and #Pride Month we are showcasing the Pride Flag and the Transgender Pride Flag at the @azcapitolmuseum today. To our knowledge, this is the first time this has happened at the Arizona Capitol. 🌈🏳️‍🌈 pic.twitter.com/EVbBmPStgr

Hobbs, an outspoken supporter of the LGBTQ community, says she saw no problem hanging the flag over the Arizona Capitol Museum building, calling it a part of her office. However, just hours after it went up, it was swiftly removed.

Hobbs found out via email. “There are a lot of things going on in our state and this is what they’re going to choose to pick a fight over?" she said.

In a tweet, Hobbs said the removal came at the direction of Senate President Karen Fann and House Speaker Russell Bowers. She told ABC15 her office was questioned shortly after hanging the flag.

“My office got a call from the Speaker's office," she added. "They just, you know, said a member was asking about it and wanted to know what it was for and how long it would be there.”

Bowers' office sent this statement following the accusation: “While the flag was not removed at Speaker Bowers' direction or request, he respects Legislative Council's obligation to enforce Capitol rules governing displays equally and uniformly. It is concerning that our state’s chief elections officer is disseminating partisan misinformation. Hopefully, this doesn't reflect how she intends to carry out her duties.”

Those rules, governed by the Legislative Council, say events on Capitol grounds need to first be approved. Hobbs argues the display isn't an event, but regulations state: "Activity on the State Capitol Grounds (including picketing, protesting, speech-making, marching, or conducting a vigil, religious service, press conference, luncheon, celebration, entertainment, exhibition, parade, fair, pageant, or any other activity that involves the communication or expression of views or ideas, engaged in by one or more persons)."

The list goes on to say, "Equipment, props, banners, signs, tents, etc. used in conjunction with an activity may not be staked into the ground nor affixed to or drawn on the trees, vegetation, landscaping, poles, monuments, sidewalks or buildings."

Executive Director for the Legislative Council Mike Braun tells ABC15 the decision to remove the flag was his, and says he only did so because the Secretary's office failed to follow the regulations visibly posted on state Capitol grounds.

With the majority of the Arizona Legislature being Republican, political experts say it's possible some may not have wanted the flag displayed on a state building.

“This is down to the granular level, who controls the building? Who is responsible for what goes on that building?" said Stan Barnes. "I think Secretary of State Hobbs is getting her own civics lesson in the limitations of power, even if you’re the Secretary of State, you can’t simply express your political agenda on the state building without someone else’s cooperation.”

“In this case," he added. "The Secretary of State can’t just fly a pride flag because she wants to.