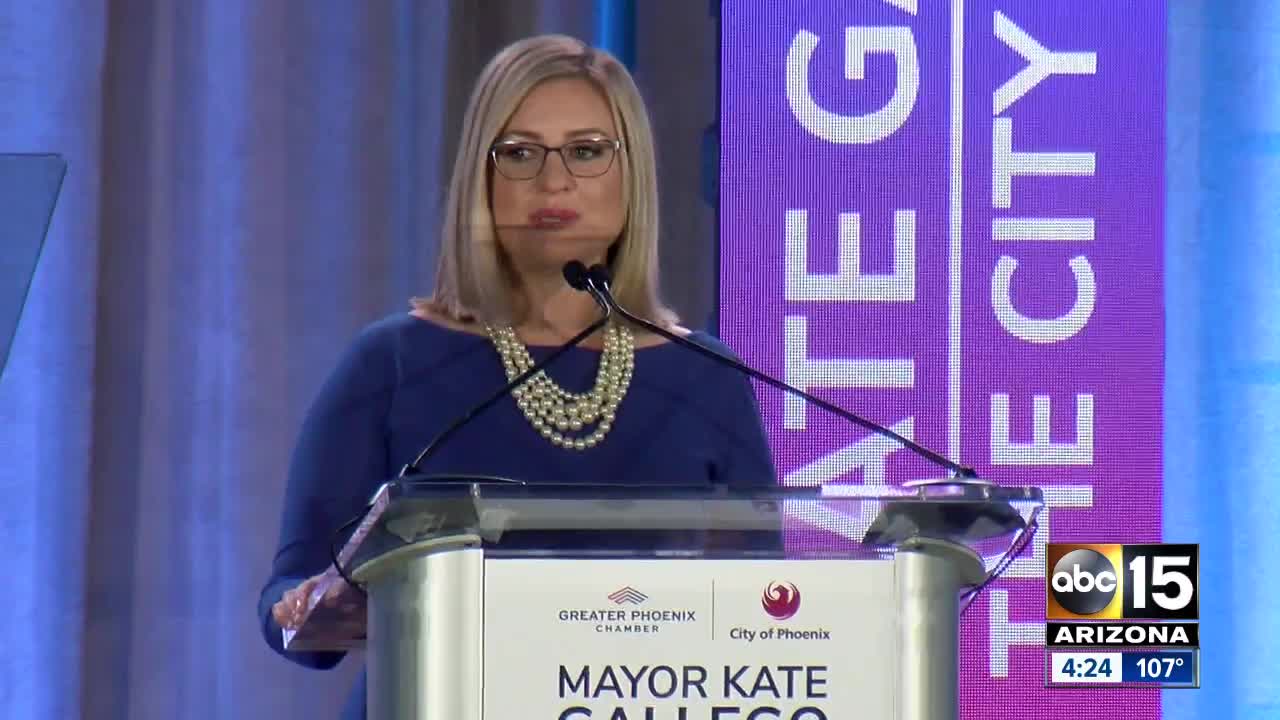 Phoenix Mayor Kate Gallego delivered her State of the City address on Thursday.

PHOENIX — Phoenix Mayor Kate Gallego's inaugural State of the City address was filled with optimism and hope. The mayor focused on Phoenix's incredible five year spurt of economic development. A period that brought more than a hundred new companies to the city creating tens of thousands of new jobs.

Three months into her job, Gallego's most immediate concern is to ensure light rail continues to expand throughout Phoenix. Gallego, an avid supporter from the beginning, now faces yet another threat to derail the project. Phoenix voters will decide once again whether to continue building it in August. "A small ideological group wants us to throw out years of economic development and reverse course with prop 105. Their plans would jeopardize infrastructure. We can not afford that," Gallego said. "The voters have spoken on this and we're going to have to speak again."

Light rail is the thread that connects Mayor Gallego's vision of Phoenix. Extending from 19th Avenue and Dunlap to downtown, onto the airport, Tempe and finally, Mesa. Gallego says light rail has brought 35,000 jobs along the tracks. Work will soon begin on the south Phoenix extension down Central Avenue.

There is much to celebrate, Phoenix is now beginning to benefit from its $3 billion investment in health and the biosciences. The payoff is over 7,000 quality jobs and the development of 4.4 million square feet for advanced health care and scientific research facilities within the next four years.

"While it's not a competition," the mayor said, "I do want to mention that Houston will only have 1.5 million square feet."

There are challenges ahead. Mayor Gallego said creating and sustaining enough affordable and workforce housing will be a priority. The city is looking at using city owned lands to determine if they can be used for housing. A "Housing Czar" will attempt to leverage resources across the city and with other levels of government to improve the city's housing supply.

While she did not mention it during her speech, Gallego did discuss issues involving some members of the Phoenix Police Department. Two incidents have put the spotlight on officers for their treatment toward people of color. The conduct was seen in stark contrast to a mayor who welcomes and promotes diversity.

"It's not okay to use excessive force. The chief has said the same thing." Gallego told ABC15's Katie Raml and Justin Pazera.

Gallego said the department is implementing the recommendations from a six month review of practices in the wake of 2018's record number of officer involved shootings.

"We are moving away from military style training. We are using problem solving and scenario based training," the mayor said.

She is also working with Police Chief Jeri Williams to embed mental health experts with some police officers on calls dealing with mental health issues.