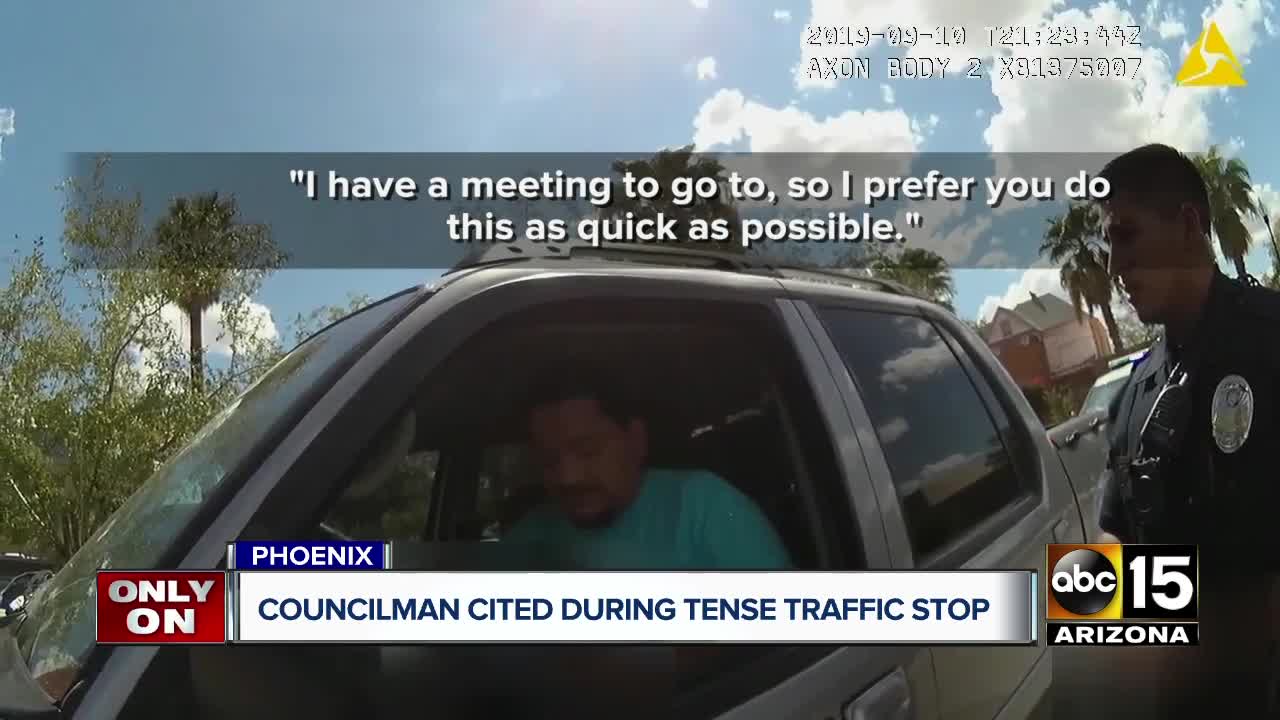 Carlos Garcia got testy with ASU police after being pulled over for not having car insurance. 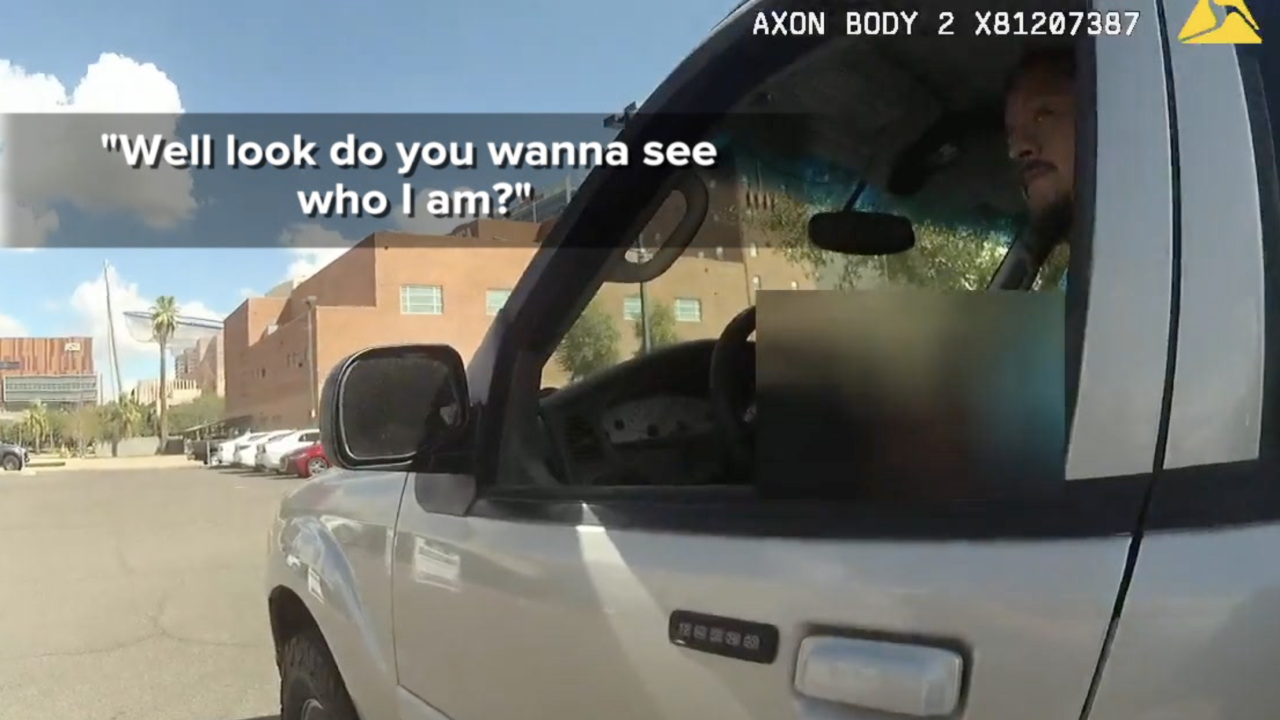 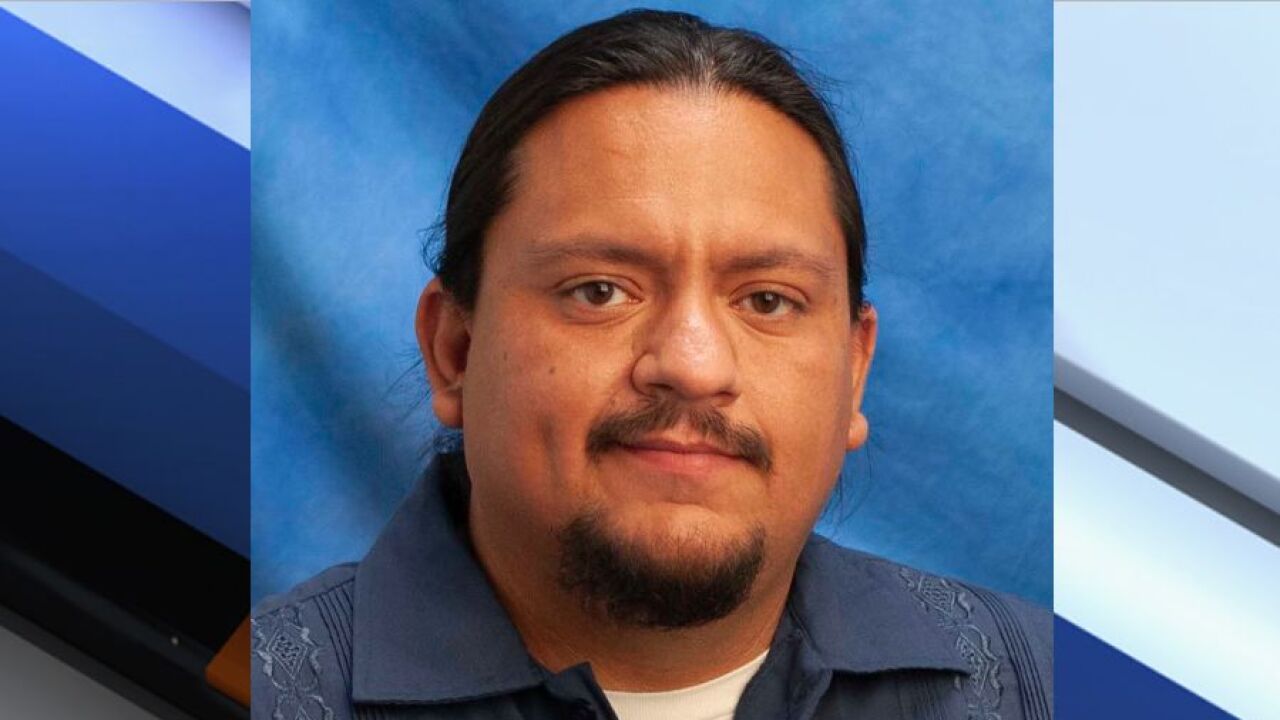 In body camera footage obtained by ABC15, the newly elected District 8 councilman questioned two ASU officers the morning of September 10 after they pulled him over off 1st Avenue and Van Buren Street.

“I don’t believe you have jurisdiction," Garcia told one officer. Garcia argued the stop happened outside of ASU's downtown campus. "I need an explanation as to what you were doing parked at the Bank of America running plates," he added.

An officer who identified himself as Officer Armenta told Garcia they did, in fact, have jurisdiction. The parking lot Garcia stopped at was just across the street from campus.

Armenta asked Garcia for his license, registration and proof of insurance.

“I have a meeting to go to," said Garcia. "So, I prefer you do this as quick as possible."

The officer's body camera video shows Garcia start to record the encounter on his cell phone, before handing him the documents.

"There was no expiration date on the document and it did not readily show vehicle information," said Armenta in his report of the traffic stop. "The insurance company confirmed that there was a policy number, however, it was canceled for non payment as of August 19 of 2019."

Garcia was cited, but refused to sign the ticket.

"My concern is that you're out of jurisdiction. This is downtown Phoenix," he said. A second officer, Officer Montgomery, responded. "Yes, and our campus is right there."

"I had explained to Garcia that I was a certified police officer through the state of Arizona," Armenta wrote.

Garcia told officers the car he was driving belonged to his father, but still questioned whether the officers made a good stop.

"I just need to look into that more to figure out how to get you guys out of here," he said, then adding, "Well, do you want to see who I am?" before both officers walked away.

“The elected official who plays the, 'Do you know who I am card?' is an elected official that is suffering from a lack of understanding of their office," said political expert Stan Barnes. "I think it makes him continually radioactive as someone to try to do business with, try to make decisions on the city council. It colors everything in a very bad way and will probably hurt his own relationships with other councilmen that are needed in order for the city to function.”

This isn't the first time an elected official tried to hint at their elected positions during a traffic stop.

Arizona Representative David Cook was arrested in December of 2018. A responding Department of Public Safety trooper said Cook handed over his House identification, instead of his driver license.

“If you’re an elected official, and you behave in this manner, it’s a bad example for anyone paying attention to the rule of law, civil society, how we are supposed to behave when we deal with men and women in blue," added Barnes.

Garcia agreed to sit down with ABC15 to explain his comments -- ones he says he stands by.

“In no way am I disputing the citation itself," he said." What I am disputing is the priorities that the ASU Police Department sets.”

When Officer Armenta returned with Garcia's citation, he asked, "Can I get a good social or quick for identifiable purposes?"

Garcia refused, telling him "You don't need my social."

"I thought as an immigrant rights activist and a police accountability activist for a long time, I’m concerned that a stop like that can end up in deportation proceedings or escalating to something else.“

When asked why he told officers he wanted to "get them out of here", Garcia says he meant out of proper Phoenix. "Their job is to patrol ASU campus, that’s where they should stay.”

Garcia denies any implication that he's above the law, and says he didn't mention his position within city council until the end of the stop for that reason.

“At that point, I thought it was necessary to let them know who I was in the sense of why I was important that I was asking those questions."

The councilman says he met with ASU's police chief to discuss officer jurisdiction outside of ASU's downtown campus, as well as whether or not officers have undergone sensitivity training.