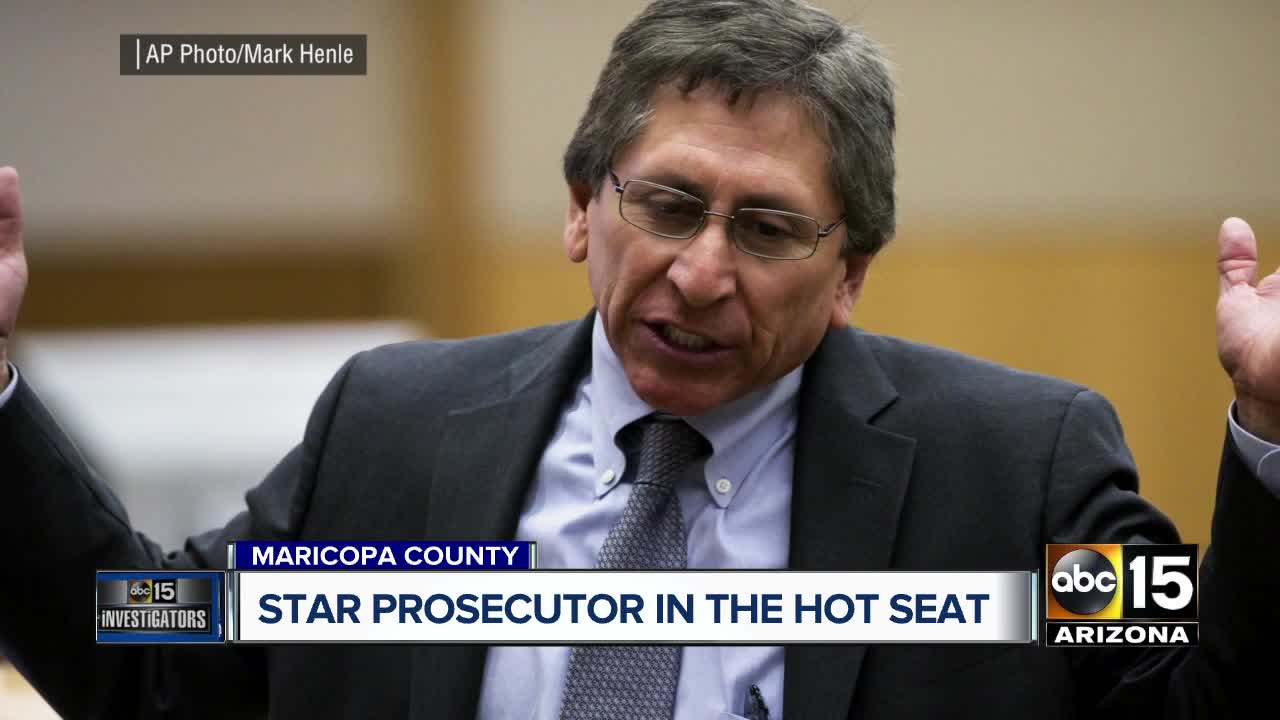 PHOENIX — He is an attorney who became a household name during the high-profile Jodi Arias murder trial. The case earned Maricopa County prosecutor Juan Martinez quite a following throughout the country. Several Facebook fan pages have been set up to support the prosecutor, but he's had some detractors as well.

In about three weeks, Martinez will be center stage of a disciplinary hearing, facing a group of women, some of whom have accused him of inappropriate conduct.

New documents obtained by ABC15 highlight similar behavior almost three decades ago. Buried inside Martinez's 471-page file is documentation of an incident from 1990-1991. It includes a reprimand from Martinez's supervisor at the time, who states:

"It has come to my attention that there was an incident in February, where you made inappropriate sexual remarks toward a female attorney in this office." The warning goes on to state, "It is now time that this behavior ceases, once and for all."

The document also reveals that Martinez's supervisor orally reprimanded him for spending too much time with females in the office, behavior which could be seen as 'inappropriate.'

Again, this was almost thirty years ago when Martinez was a young, rising star in the Maricopa County Attorney's Office.

The majority of the personnel file consists of one glowing review after another of the young prosecutor's dedication. Supervisors referred to Martinez as "a most enthusiastic litigator," "willing to take on any assignment," and one who "demonstrates a go-for-the-jugular style."

Over the years, Martinez has tried some of the most high-profile murder cases in the Valley and put dozens of people behind bars. His supervisors described him as a workaholic who spent long nights and weekends to get ready for a trial. Others young attorneys looked up to him.

He was also known to have a "flair for the theatrical," and inappropriate behavior in the office.

Martinez is accused of leaking information to a court blogger he was allegedly having an affair with during the Arias trial.

An 18-page ethics complaint filed against Martinez outlines more women who came forward alleging he made inappropriate comments towards them.

Thirty females working in the county attorney's office, many of them law clerks, were interviewed as part of the investigation.

According to the complaint, in 2015 Martinez allegedly told a law clerk he wanted to 'climb her like a statue.' He allegedly asked another law clerk to go to Vegas and would guess the color of her underwear. On another occasion, Martinez is accused of asking a woman to leave her husband for him. One court reporter stated that Martinez told her, "I would like to see what is inside that skirt."

Martinez's behavior led women in the county attorney's office to hide in the bathrooms or duck behind cubicles when they heard him approaching, according to the investigation.

ABC15 reached out to Maricopa County Attorney Bill Montgomery to get more information on how his office had handled these complaints. Montgomery declined our request for an interview, and instead, a spokeswoman pointed ABC15 to videos of press conferences Montgomery had held earlier in the year.

In a December 2018 press conference, Montgomery said Martinez had been disciplined for violating office policy related to administration and training. When questioned at the time, Montgomery declined to elaborate.

A spokeswoman said Martinez received a written reprimand in his personnel file and about $5,600 in compensation was withheld from his salary.

ABC15 asked Montgomery's office if it was aware of the 1990-1991 reprimand in Martinez's file, and if so, whether it was reviewed before deciding how to discipline him nearly thirty years later.

Montgomery's office declined to answer our questions, citing the upcoming disciplinary hearing at the end of August.

A group of about 20 statewide organizations and several state Democrats have called for Montgomery's resignation over how he has handled the Martinez investigation.

In an open letter to Montgomery, the groups state:

"Attorney Bill Montgomery has allowed the most prominent prosecutor in his office, Juan Martinez, to persist in a sustained pattern of degrading and harassing women, including court reporters, defense counsel, and law clerks."

"This sort of failure in leadership and accountability is a major reason why widespread and systemic gender discrimination so often remains uncovered," the letter goes on to say. "It is what leads victims of harassment and discrimination to stay in the shadows, believing that reporting misconduct will accomplish nothing, or, worse, damage their own careers. And it enables powerful men to continue exploiting women for the sake of their ambition."

Montgomery posted a response to another similar open letter he received on his office's website. You can read his full response here.

ABC15 reached out to business law attorney Scott Gibson to get perspective on these types of cases. Gibson is a partner with the Davis Miles McGuire Gardner law firm and has handled many workplace harassment cases, mostly representing employers. Gibson has nothing to do with the Martinez case.

He said that the climate in the country has changed in the last 30 years.

"I think women are less afraid now, and people are more aware and more sensitive to these matters," said Gibson.

ABC15 asked Gibson how workplaces he dealt with were handling similar cases or complaints, and at what point did they consider an employee to be a risk?

In Martinez's workplace evaluation, his supervisor states he believes Martinez could change, but again, that was almost three decades ago.

His disciplinary hearing is scheduled to start August 27th and go until August 29th.