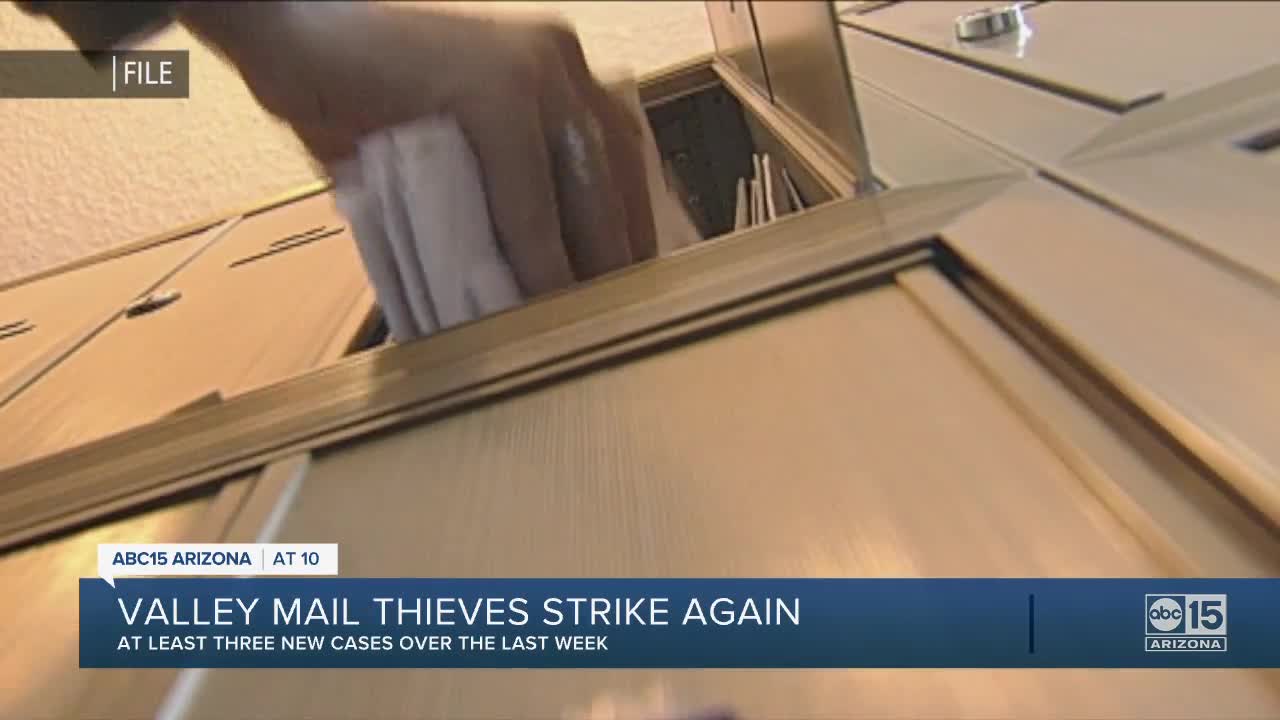 It wasn't just a holiday trend, the United States Postal Service says Valley mail thieves are back on the prowl.

PHOENIX — It wasn't just a holiday trend. The United States Postal Service (USPS) says Valley mail thieves are back on the prowl.

"Witnesses have seen at least two individuals in ski masks come up to the back dock of the facility and steal trays of mail," said Phoenix Postal Inspector Liz Davis, who describes these incidents as "bold."

“They’re doing it in daylight hours, a lot of mail theft typically occurs in the nighttime hours when people are asleep," Davis said.

Earlier this month, a Valley mother accused a woman she caught on camera returning her missing mail of trying to steal her son's passport and private information. The woman allegedly read a letter left inside the returned mail and admitted to going through the woman's mailbox.

"The suspect told the carrier not to move, the carrier complied, and they proceeded to grab a tray of mail from their mail truck," said Davis.

While the carrier never saw a weapon, USPS officials worry these incidents could escalate and turn violent and hope to catch the men behind the most recent heists.

"There is nothing that is worth your life, so we want them to just be a good witness and don’t try to take on a criminal themselves," Davis said. “If you see something suspicious that’s not the time to exit your vehicle and take mail to a mailbox.”

USPS officials say carriers and post office workers are being encouraged to get mail off loading docks and secured within the facility as soon as possible every morning to try and avoid further attempts.

The postal service is offering a $10,000 reward to anyone with information on the suspects involved in all three of these heists.

Officials say the suspects were seen driving a 2016-2019 silver, four-door Toyota Corolla. The vehicle may have a missing hubcap or a spare tire on the front driver's side, and the rear vehicle windows are tinted dark. The suspects are both described as Hispanic males, between 5 feet, 9 inches and 6 feet, 1 inch tall. Both were seen wearing black ski-masks with red and white circles on top and eye slits.

When asked what victims of stolen mail can do to recover their stolen items, Davis says they should contact the sender, whether it be a bank or vendor, to ask for a refund. However, if the package includes cash or any similar item, there's no guarantee customers will get it returned unless USPS recovers the stolen mail.

The postal service says if you haven't received mail you were expecting, contact the postal inspector.