Meet Scott Bindley, a screenwriter and producer here in Arizona 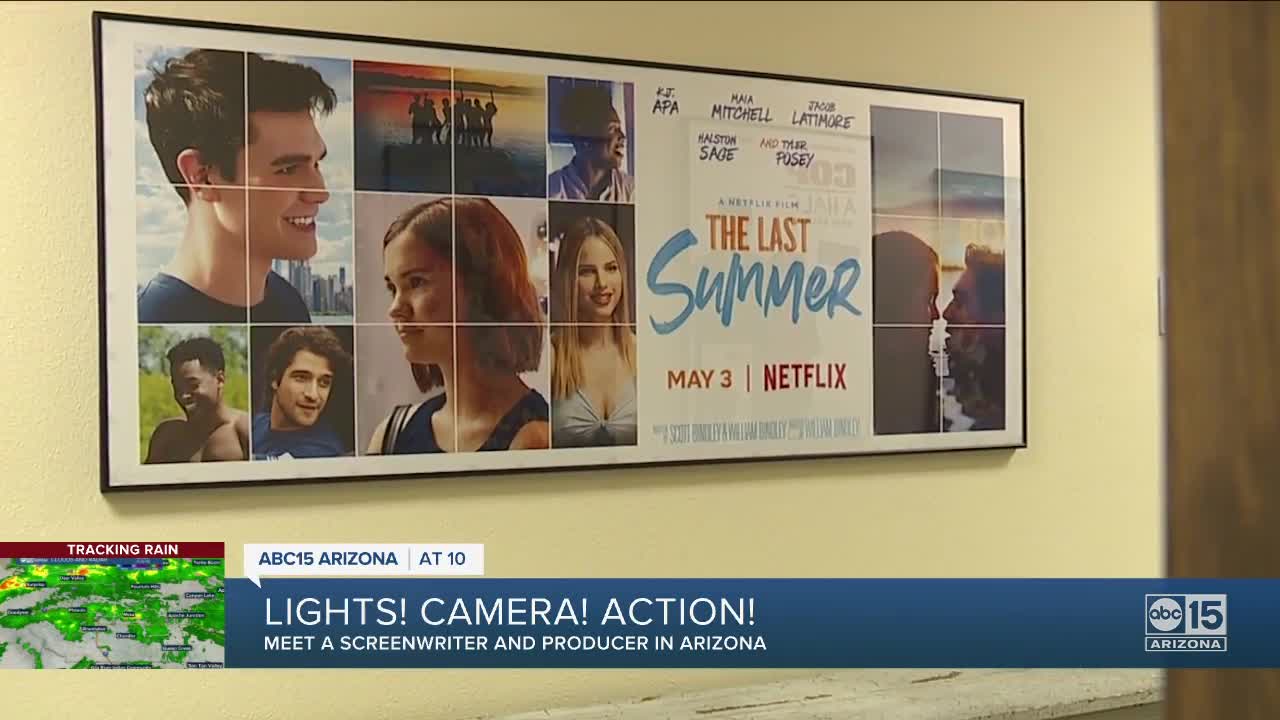 Scott Bindley is known for movies like "Cats and Dogs."

PHOENIX — We still have The Oscars fresh on our minds. Many people may think movie makers are just in Hollywood, but there is someone making magic in our state!

Scott Bindley is a screenwriter and producer, living right here in Arizona. He's known for movies like Miracle Beach, Johnny & Clyde, Cop and a Half - New Recruit, The Nuts Jobs 1 and 2 and so many more! His first labor of love was Madison, that he and his brother worked on together. Madison is a heart-warming sports story that Scott started working on writing and researching when he was in college. It was shot in 1999, and released in 2005. The actual true story took place in 1971, and Scott believes it will "always have a place because it's a period piece." He also added that Madison lead, Jim Caviezel, went on to do The Passion of the Christ. Scott was also thrilled to work with Academy Award Nominee Bruce Dern in that film.

His brother, William, is a writer, producer and director. They have a company in Los Angeles, located on the lot of Warner Brothers. "He's four years older. So, those four years that I was in college, he was in L.A. Everyone has to start on the bottom. So, he was doing production stuff, knocking down doors, working on music videos back when those were a big deal, and working on small productions. So, by the time I graduated from college, it was easier for me. I could step in quickly."

CHANGES IN THE INDUSTRY: MORE OPPORTUNITIES WITH STREAMING AND OTHER CHANNELS:

Scott has seen the industry change, and he views streaming, cable and feature films equally. This past summer, he had a movie come out on Netflix called The Last Summer that he also worked on with his brother. Scott is currently working on the new Warner Brothers family comedy, Cats and Dogs - Paws Unite, that will release later this year on DVD and other streaming services. He told me that he likes that there are new opportunities to make content.

"Hundreds of channels are making their own content... So, if you're making something for a streaming company or you're making something for a cable channel, in my mind, it's not a step down or three steps down from making a feature film. It's just about making things. It's about making movies, making TV. It's all the same to me. ... Whether it's a family movie, a true story, comedy or drama, there's a place for all of it. So, in the time since I've started, all of those things are being treated more the same," Scott said.

HOW SCOTT IS IMPACTING THE VALLEY AND PHOENIX CHILDREN'S HOSPITAL:

He's also very involved here in the Valley. Scott told us, "I've been on the board for the Phoenix Children's Foundation for several years... And they do incredible things."

Scott is also a self-proclaimed "car nut". He created a charity called Wheels for Wheels. Scott buys a sports car at a discount that needs to be fixed up. Then, he has people from all across The United States donate parts, time and/or labor. The car is then sold, and the proceeds go directly to Phoenix Children's. He's working on the 12th car right now. To date, this has raised several hundreds of thousands of dollars.

The community rallies behind Scott, too! Some of Scott's films don't come out in theaters. So, the Arizona Science Center offers a private screening for friends and family. And Scott invites Phoenix Children's patients and families who are able to leave the hospital and provides free food and drinks.

LET'S TALK ABOUT THE OSCARS:

Scott is part of the Writer's Guild of America, and gets screeners, meaning he can watch the films before they even come out. He told me he enjoys watching them as an audience member and not with a critical eye, though some movies dictate being seen in a theater.

We talked about The Oscars, and Best Picture Winner Parasite was one of his favorites. The other was 1917. His friend, Thomas Newman, was nominated for the 15th time for 1917's musical score.

"He is a super talented guy and has done some of the scores of the greatest movies ever made... He did the score for The Shawshank Redemption, and all of these other great movies, and he's never won."

He didn't win this year either.

But, we agree with you Scott. He deserves to take home the trophy at some point!

I asked him what other flicks he recommends.

"Knives Out is really good, super unique. I remember thinking WOW that was really entertaining. It was up for Best Screenplay, which is probably one of the reasons why I liked it. It wasn't nominated for Best Picture, but it had a great cast, twists in the story and kept me guessing. It was probably my favorite movie of the season. The other one I saw was Honey Boy, which is really, really good. It's based on the life story of Shia LaBeouf. Really amazing acting and a unique story that was super well done, whether or not it was deserving of a nomination. It was just really good, unique and well done," Scott shared.

I told Scott that my favorite actor of all time is Jim Carrey. Scott admires his work as well, and laughed when he told me, "It's funny. We watch The Grinch every year, and when we watch that, I think that Jim should have been nominated for Best Actor. Not to appreciate what he did, not just because of the crazy makeup and all of that. It was a great performance, and I think even since that time, comedies are starting to have a little more of a response from serious film media and The Academy. He's just great. He's funny, he's talented. He can do anything... He should have at least been nominated. Whatever a screenwriter puts on the page, he will bring it to a whole new level."

Scott told us he enjoys when actors can bring the script to life and make changes. Scott told us that George Lopez plays the voice of a character in Cats and Dogs - Paws Unite, that releases later this year.

"I listened to his recording, and it was funny! He added things because he's a comedian, and he knows how to deliver," Bindley said.

I asked Scott what he thinks about our favorite Arizona actress, Emma Stone. He smiled and said, "She's like an old-time movie star. She has that thing. She just has it!"

Scott shared some incredible stories about his experience. He talked through the process of screenwriting, how sometimes a producer will come to him to get his take on an idea, or have him create an outline. And other times, he will go to them with ideas. Then, he creates several drafts, and once it gets to production, his work isn't done. Sometimes during a shoot, something will come up, like unexpected rain, or an animal that can't finish a scene, or an actor who changed his look without telling anyone. He writes around all of it to make it work for the film. Most times, he's involved every step of the way, sometimes including casting. While, other times, he may not hear anything until the movie comes out.

Does Scott have any favorite places to shoot? He told us that he wishes Hollywood would come to Arizona. He talked about how other states like New Mexico, Louisiana, Ohio and many others have incentives, but Arizona, from more than a scenery perspective, has everything movie productions are looking for. He talked about the great weather, the ability to be in snow just a couple hours north of Phoenix, a great downtown. "We have everything, but beaches. But, you can work around that."

When it comes to advice for people who are wanting to get into the "Lights, Camera, Action" industry, Scott had shared more about his personal experience. Scott wrote articles in high school and always enjoyed creative writing. When he was in college, he took every screenwriting class offered, got an internship his senior year, and that turned into a job when he graduated. He was working on Madison, which was later produced and released. His brother was in Los Angeles already in the movie business and had opened up some doors. There was a period of time where he was selling bigger screenplays to bigger studios, so that's why there's a gap in his credits. Those projects are still in active development, some with big names attached, and he expects them to be produced in the near future.

Scott is constantly writing. Mastering your craft is key.

He told us, "It depends on what part of the entertainment industry they're interested in, whether it's acting or production or directing, writing, set design. The easiest thing is to find some entry-level opportunity. I'm thinking about young people who are looking into studying this. There are always opportunities with internships, volunteering or even just finding anything that gets your foot in the door and gives you experience. There are things going on here. There are people making commercials, there are agencies that have actor stables, and they know what's on going on. There are things being filmed here. So , if someone lives here, and they don't have an opportunity to pack up and go to LA or New York, there are things that can be done here. My advice if you want to be a writer, that you have to write stuff. You need to have something to show people. It's not so much the idea of doing it. Do it for experience. Find people to read it to improve, and then work on something else. Just continue to do it. That's the best advice. Find ways to do things you're interested in. There are a lot of people who just want to be in the film business. My advice is to find something you are good at and passionate about. Do that. I'm a writer. Before I was a screenwriter, I wrote magazine articles, TV commercials. I'm always writing something. That's the important thing. My work just happens to translate pretty well to the screen and that has shaped by career, but the process of writing is always first."

I asked Scott if his kids want to follow in his footsteps. He told me his son delivered a three-word line of dialogue in The Last Summer and that he nailed it! His twin, teenage daughters have also had an exposure to the business and have gained an appreciation for the process. One is interested in interior design. So, there may be an opportunity for set design. He laughed and said, "Beyond that, nobody is writing screenplays. So we'll see."