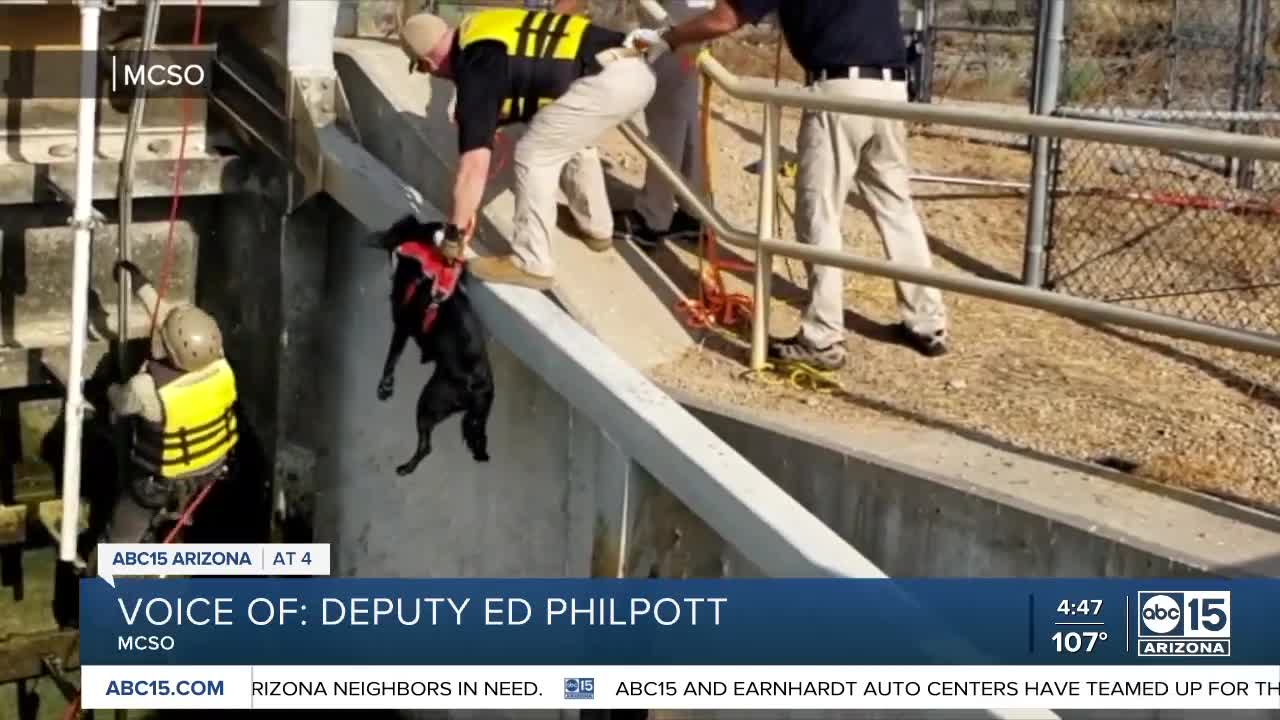 A search for a missing man ended with Maricopa County Sheriff's Office officials rescuing a dog trapped on a ledge, above a Central Arizona Project canal.

PHOENIX — A search for a missing man ended with Maricopa County Sheriff's Office officials rescuing a dog trapped on a ledge, above a Central Arizona Project canal.

"It was just wide enough for her to be seated on it and up against the dam gate itself," said MCSO Detective Sergeant Jason Gilchrist, who found the dog while scouring the area by the canal for the missing man.

Sgt. Gilchrist is with the Lake Patrol unit and had responded to a call for help from Phoenix police in trying to locate a missing man. Gilchrist said he was ready to wrap up his search, when he decided to take one walk toward the dam gates for a last look. That's when he saw something pink and white. Turned out to be the tongue and teeth of a dog huddled up on the narrow ledge of the dam gate. The dog was trapped.

"She was about four feet from the water, but on the back of this gate the water is billowing underneath it at a rate that is extremely fast and violent," said Gilchrist.

Gilchrist said he did not have his diving gear with him, and did not think it was safe to try to rescue the dog himself.

"Had I gone into the water I would not have made it out. Just with the swirling eddy, I felt this horrible helpless feeling that was sickening to me," said Gilchrist.

As he watched the dog, at one point, he said she fell into the water. He helplessly watched her trying to fight the current.

"The water was so strong it was swirling her back in. She was getting more and more labored. I literally thought I was watching her drown," said Gilchrist.

He yelled out to nearby Central Arizona Project (CAP) workers to lower the dam gate, so the dog could climb back up to safety, which she did. Gilchrist then called one of his team members, Deputy Ed Philpott for help. Philpott was not working that day, but he was an expert in rappelling rescues. Deputy Philpott responded right away.

"Once I approached the dog from the back, I tried to give her a treat which she didn't want because she obviously was scared to death, but she did let me approach her. Since she was cooperative, I just came around to her side and she allowed me to put the harness on, and we lifted her out. That was it, out and back on the ground again," said Philpott.

The amazing rescue was caught on camera.

Once back on dry ground, the dog was taken to a local First Pet clinic to be treated for her injuries. Sgt. Gilchrist said she had a lot of cactus needles attached to her body. The Arizona Humane Society was ready to take the dog in and adopt her out eventually, but Gilchrist said he felt a strong attachment to the animal he had helped rescue.

"I told my wife, I said we're going to adopt this dog. We are just going to do it," said Gilchrist.

He has named the dog "Lucky." Lucky is now in her new home, in good health, and settling in with her new family.