Man claims he was beaten up by officers for no reason; PHX PD responds 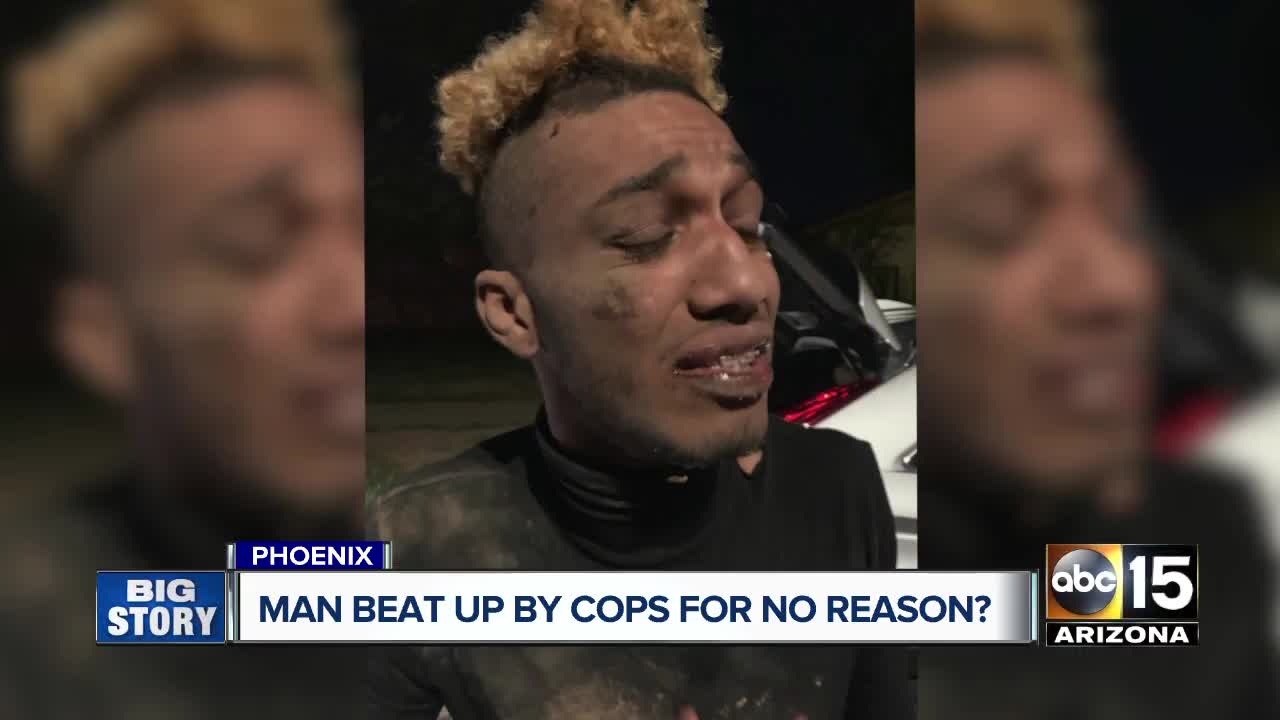 Man claims he was tied up, elbowed, dragged and bruised by Phoenix police. PHOENIX — A 23-year-old man claims he was tied up, elbowed, dragged and bruised by Phoenix police officers for no apparent reason, but police have released a different side of the story.

AaRone Fowler says it was still dark out Sunday morning when he was approached by officers near 16th and Monroe streets in Phoenix.

Fowler, there to pick up a friend, says officers told him they were responding to a noise complaint and asked for his identification.

He says officers told him he was free to go, but noticed one started pulling at the doors of his car. That's when things went south, according to Fowler.

He alleges two officers tackled him to the ground after screaming out a code.

“My whole face from my right side was dragged through the dirt and the mud," Fowler described. “They kept saying, 'Stop resisting,' but I kept saying, 'What am I doing? What did I do?'" Fowler says he begged officers not to kill him.

“They kept saying, 'You’re lucky you’re not going to jail,'" Fowler adds. "It’s not luck, it’s the law. I didn’t do anything to break the law.”

Fowler says those officers searched his car and found his registration with his name listed - prompting a change of tone and his release.

“They ended up just telling us to go about our night and let us out of the car. As we're getting our stuff we realized no, this is not okay.”

Fowler says he later asked the officers for their names and badge numbers and received a card with an incident number written, but has yet to track down a report related to the incident.

UPDATE: On Wednesday, Phoenix police released the following information on how they say the incident transpired:

On March 17, 2019, at approximately 3:00 a.m., Phoenix Police Officers responded to a call of a fight in the area of 16th Street and Monroe Street. Prior to the officers' arrival, more information was received and the call was upgraded to a physical fight between two men. When the officers arrived, they found a vehicle stopped in the roadway with the hazard lights on. The officers attempted to contact two men outside of the vehicle, who refused to talk to them before contacting an attorney. The men started to walk away. Because the car was in the roadway, the officers said they would have to tow it. The two men walked back, arguing with the officers, stating they couldn't tow the vehicle. At that time, a records check revealed the car was an outstanding stolen vehicle from Scottsdale, Arizona.

The officers attempted to detain both men, who refused to comply with the officers' directions and a struggle ensued. One of the individuals was taken to the ground before he could be detained. When the struggle was over and both men were detained, the officers contacted the Scottsdale Police Department. At that time it was determined the vehicle was a valid stolen vehicle, however, the theft was based upon failure to meet financial obligations by the purchaser, who was one of the two men. Because of that, the officers elected to release the two men and towed the vehicle.

Because of allegations, the Professional Standards Bureau of the Phoenix Police Department is investigating this incident. Investigators would like to speak with both men, who have refused the attempts made thus far to contact them.