LIVE UPDATES: Clean up begins after Rosa moves on out 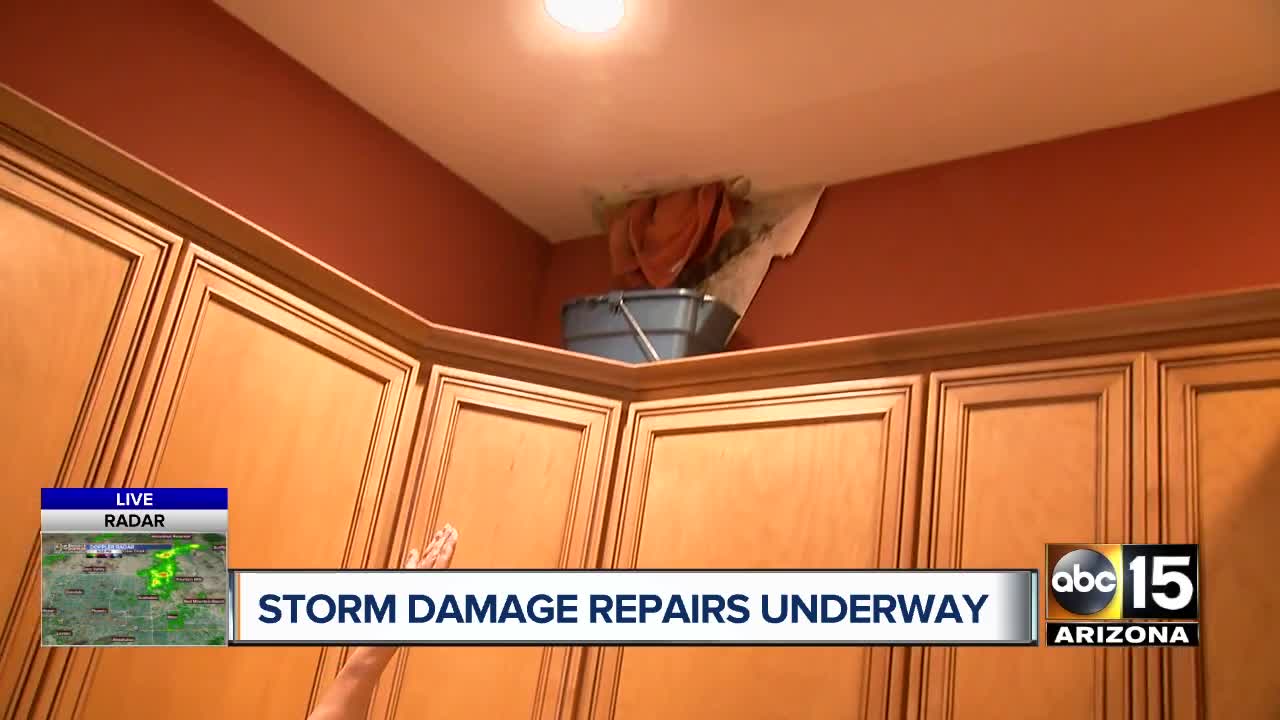 Make sure you're dealing with a reputable company, as the days after a storm see a surge in scam contractors. 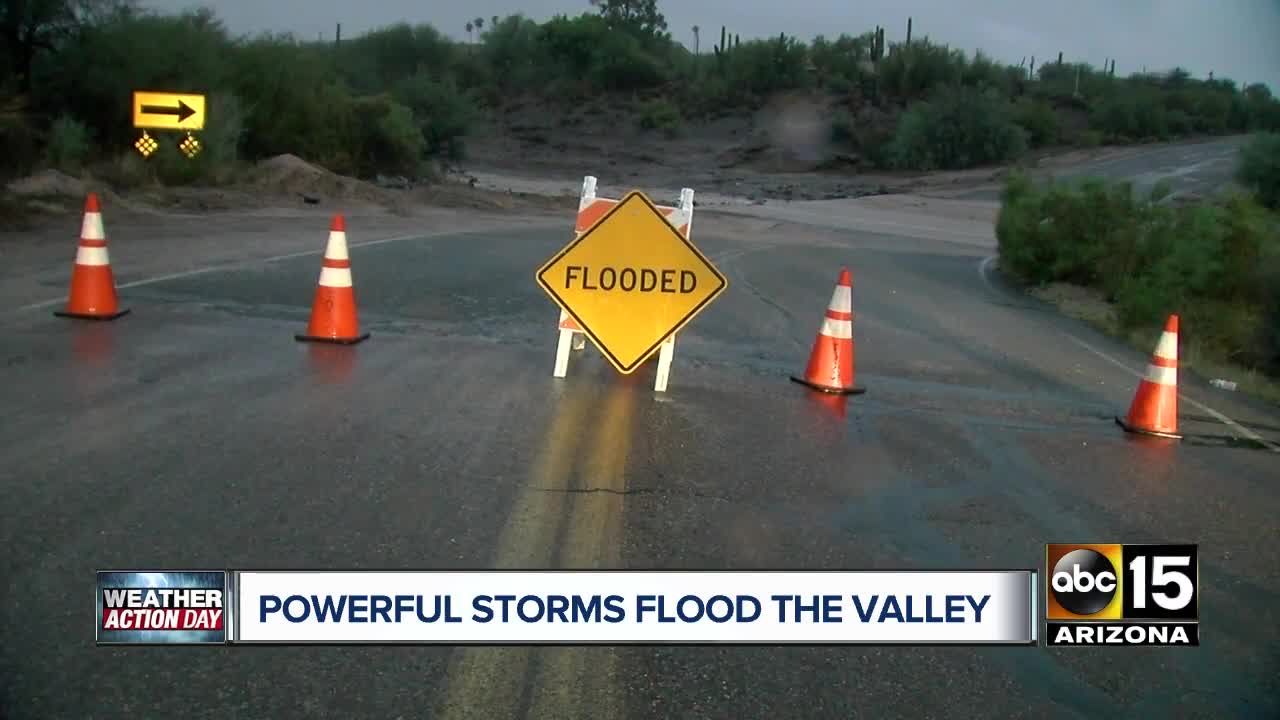 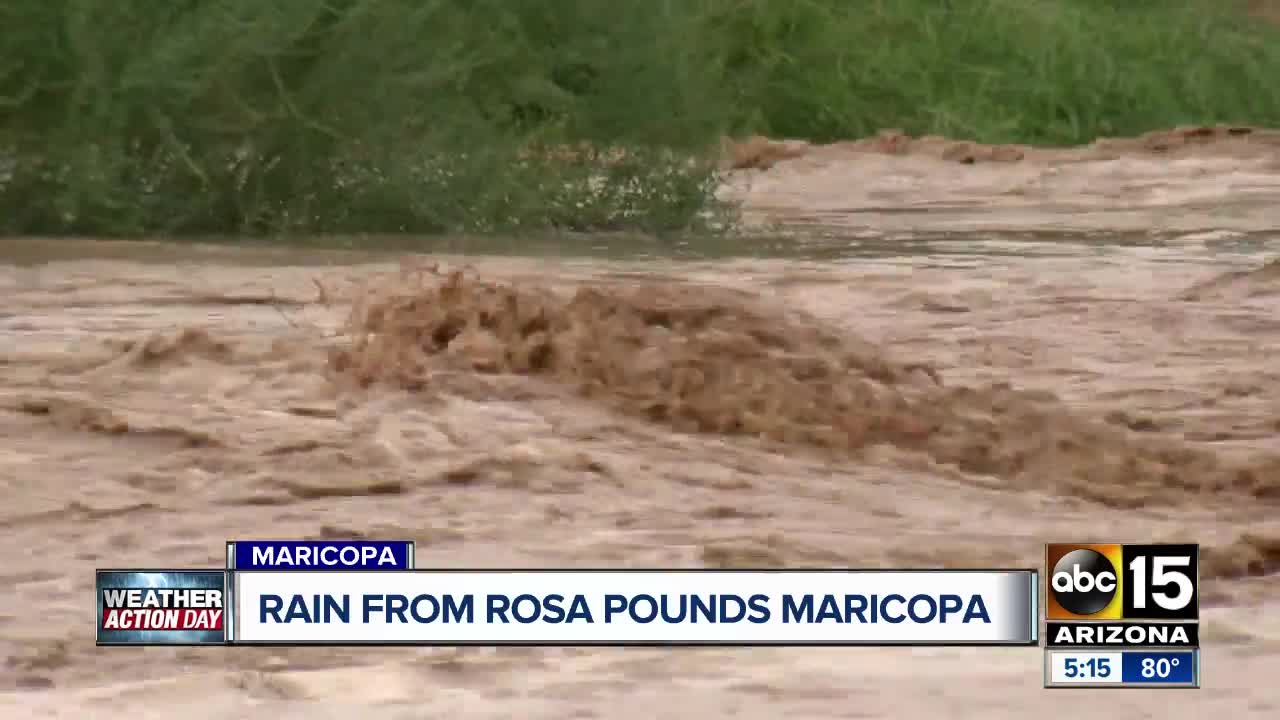 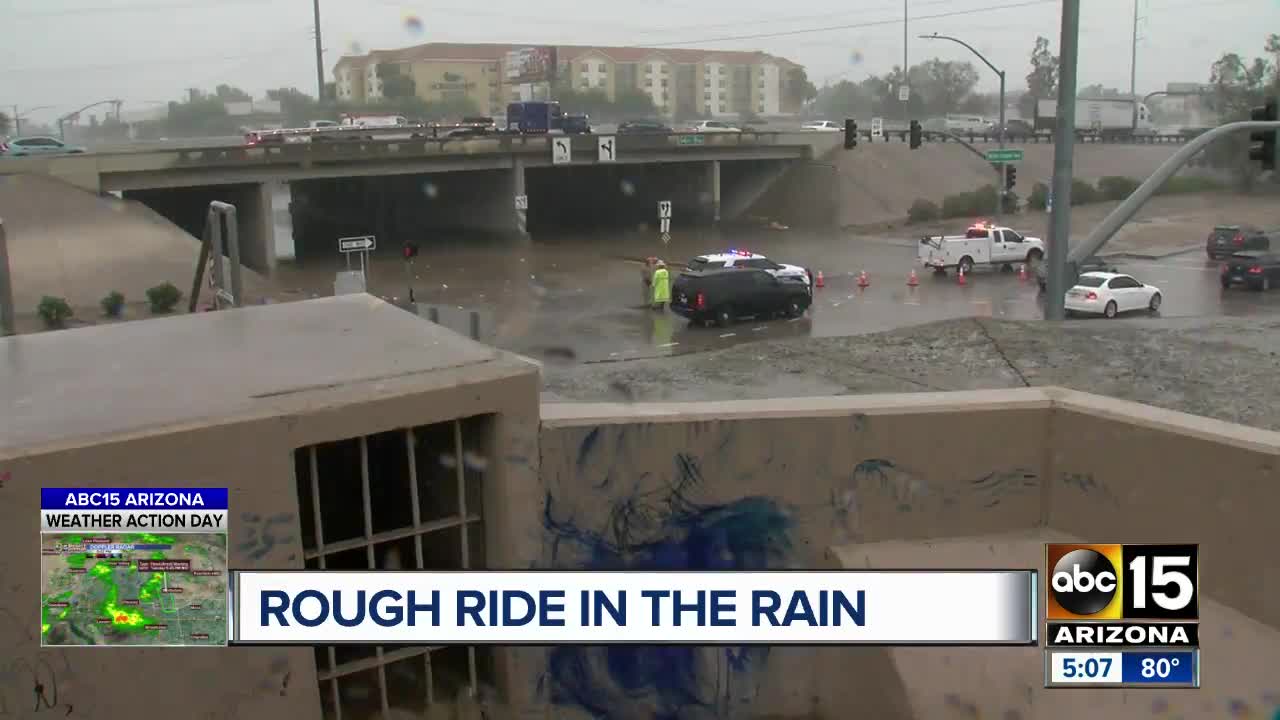 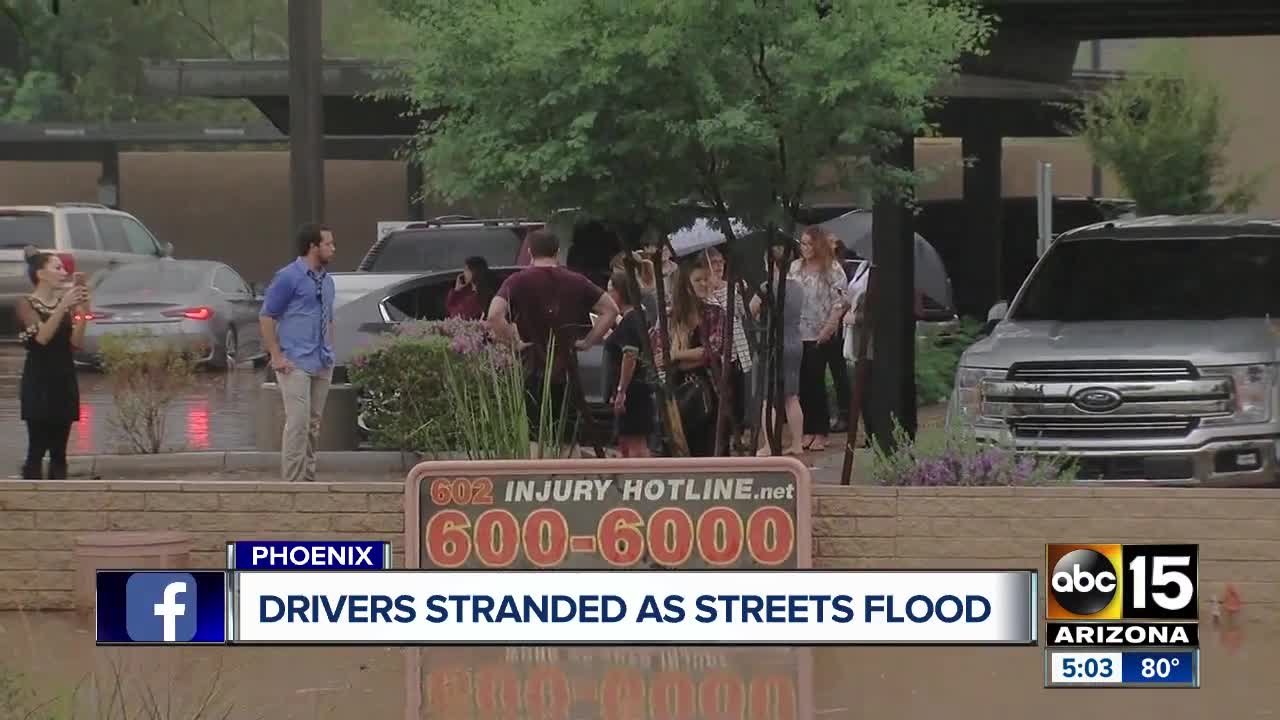 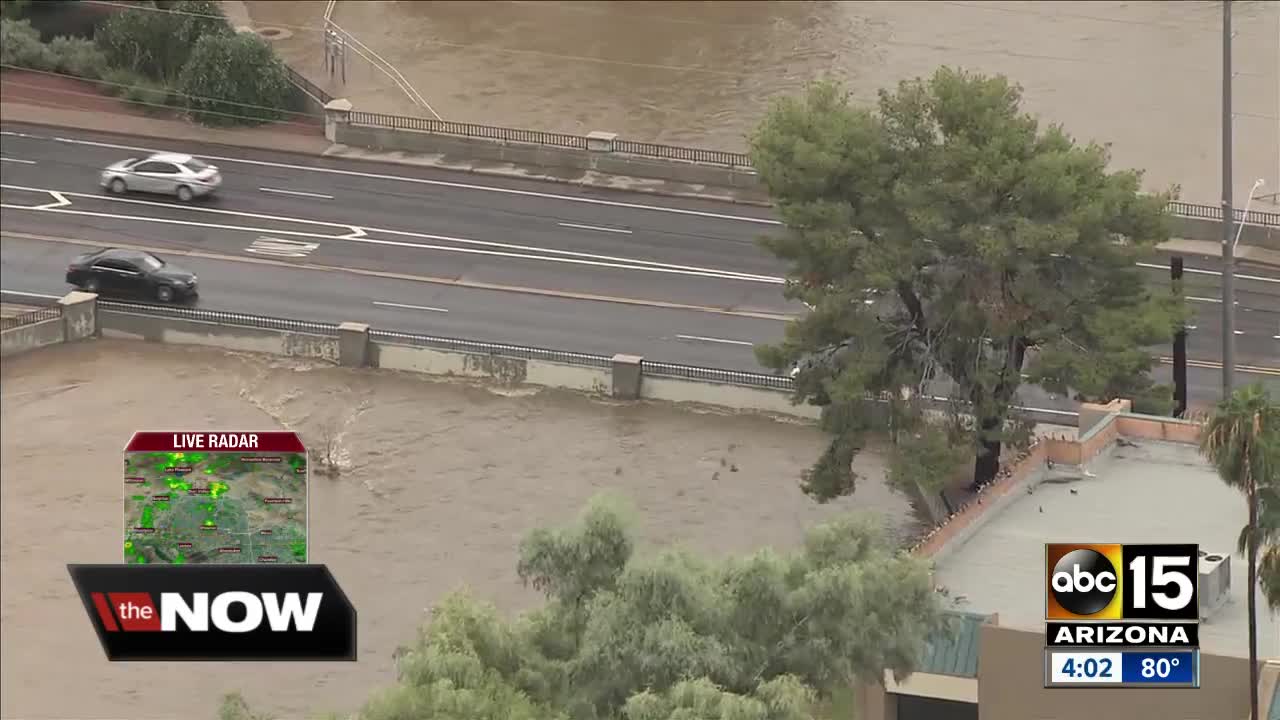 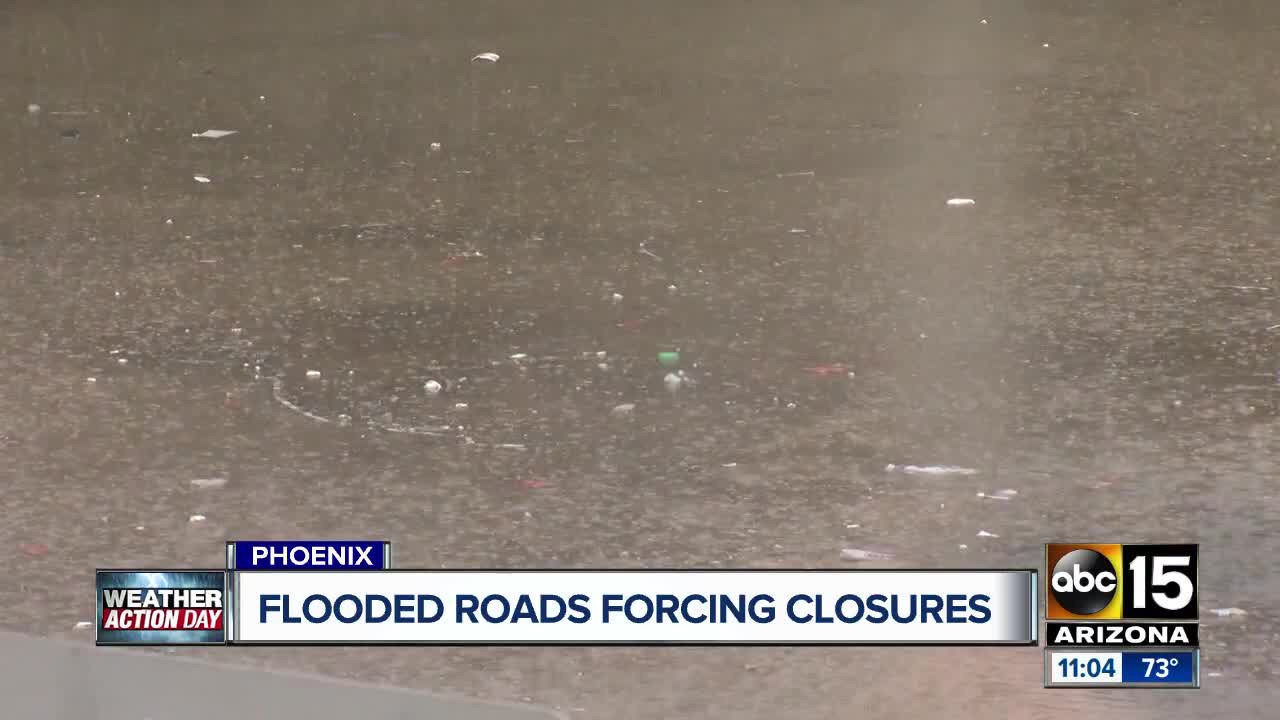 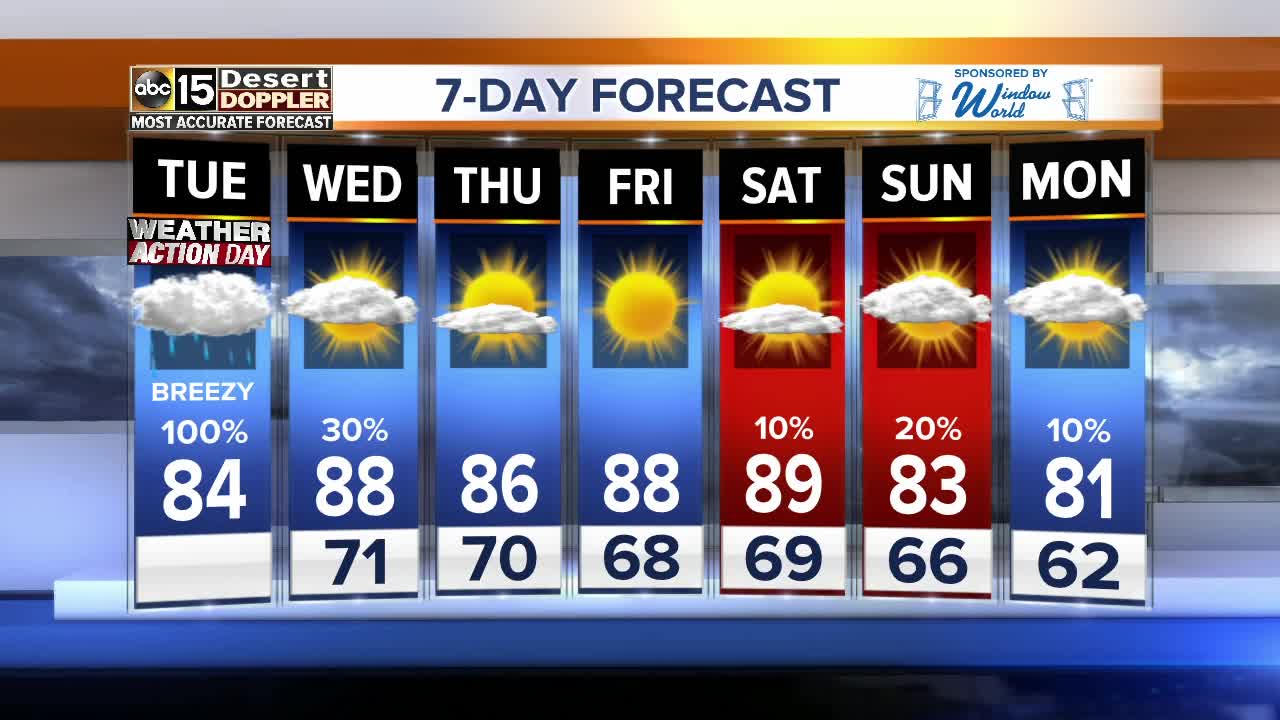 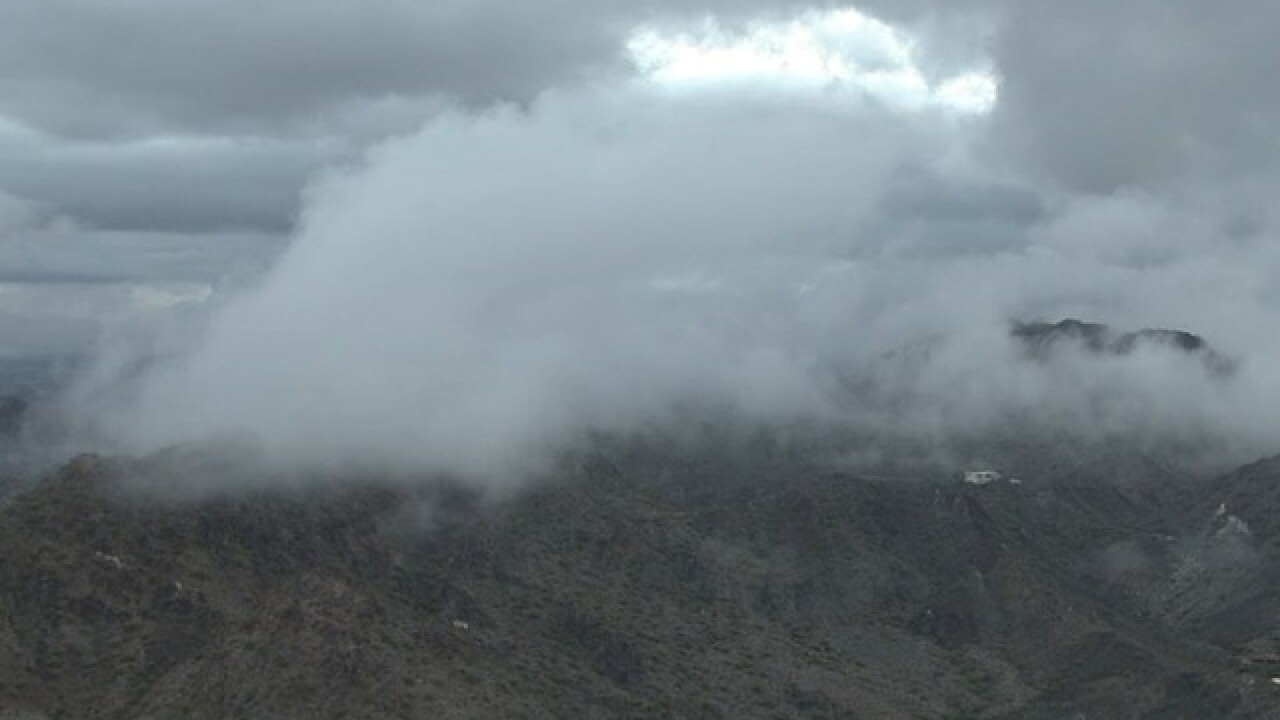 Flash flooding hit hard in parts of the Valley on Tuesday after more than 2 inches of rain fell in metro Phoenix within just a matter of hours midmorning. The rain had slowed significantly through the day, but left its mark with flowing washes and debris-laden streets.

RAINFALL TOTALS: See how much has fallen in your area

Be alert for rocks on the highways that have been dislodged during the storms. ADOT has crews out to clear them. #aztraffic #azwx pic.twitter.com/I2AJ4xEVVB

There's some isolated showers along I-17 in the Anthem area. Slow down. #phxtraffic #azwx pic.twitter.com/n25Tyh3Z8V

This is the same area that's under a Flash Flood Warning until 10:30 a.m.
Be careful if you commute thru here. In fact, you might want to delay travel a bit or use an alternate route #abc15wx #azwx https://t.co/Dxa5Z6zUNH

CLOSED: 35th Ave & Cactus Rd, the intersection is still CLOSED in all directions due to a sink hole. Avoid the area. #phxtraffic

We have more showers on I-17 in the North Valley. Slow down and turn your lights on. #phxtraffic #azwx pic.twitter.com/UXyHOwDUiC

If you had the day off of school because of weather yesterday you don’t today. All schools including Desert Horizon re-open today after being plagued by #Rosa pic.twitter.com/Ef9PbtwUxS

This is an area I've been watching all morning. Slow moving rain throughout the morning, flash flooding is expected. Heads up if you're in #Anthem or #NewRiver #abc15wx #azwx https://t.co/kujrTj8cXk

We are not in the clear just yet!
Our Flash Flood Watch has been extended thru 5 p.m.
Scattered showers and thunderstorms are possible this morning and afternoon, and that could bring more flash flooding to the area. Stay alert! "Turn Around, Don't Drown" #abc15wx #azwx pic.twitter.com/1F7SvjTD3D

The Flash Flood Warning has been extended until 8:45 AM MST. Very high flow has been observed along Oak Creek in Cornville which is flooding some residential yards, hiking trails along the creek, and portions of an RV park in the area. #azwx https://t.co/zQXIhW7QPr

2:20 AM MST: Flash Flood Warning for Pumphouse Wash in Kachina Village where earlier rainfall has created high flow and dangerous conditions in the wash. Public reports some driveways have been washed out. #azwx pic.twitter.com/Gv2JzBHTpD

The Flash Flood Warning for Scottsdale and Paradise Valley expired. However, a flood warning was issued for the Indian Bend Wash area in Scottsdale overnight and into Wednesday morning.

Rain in the high country overnight is leading to warnings from the National Weather Service office in Flagstaff.

Flash Flood Warning for Page Springs and Cornville including Dry Creek and Oak Creek until 245 AM MST. Significant rises were observed on Dry Creek Levee gauge in the past hour. Flash flooding is expected to begin shortly. Move to higher ground now. #azwx pic.twitter.com/OizSfpf0MV

These three intersections are all open for traffic. As rain continues throughout the night, please use caution while driving. #phxtraffic #PhxStorm https://t.co/m5xpTSH3Ou

Alright...did some official updating to this chart. Suffice to say it has been raining today! #azwx pic.twitter.com/FFHEr7dVGy

Flood advisory until 1230 AM MST (green box) due to heavy rain developing and moving over the same areas. Be very cautious in this area as flooding at night is difficult to see. #azwx pic.twitter.com/KCSYcorfSU

L-101 Pima: We are seeing some pretty good rain between Via Linda and Hayden. Drive carefully in the area. pic.twitter.com/2vYZPWTIcq

The Urban and Small Stream Flood Advisory Remains in Effect until 1200 AM MST for Maricopa County. https://t.co/mtXQCU6ffm #azwx #cawx pic.twitter.com/CjE8tCCR6R

Heavy rain is falling between Flagstaff and the Verde Valley...through 945 PM MST. Use caution in this area this evening as there could be flowing water in washes and falling rocks in Oak Creek Canyon on Highway 89A. #azwx pic.twitter.com/uirJD2J8p1

Another round of rain for the Valley tonight. #Phoenix and #Scottsdale under a Flood Advisory until 12 am. Flash Flood Watch continues across central AZ until 5 am.

UPDATE: Flooding has receded on SR 51 at Cactus and lanes have reopened. #Phxtraffic pic.twitter.com/KB7LxLXTMS

SR 51 at Cactus: Roadway restricted to the HOV lane in each direction only due to flooding.
Expect delays. #phxtraffic pic.twitter.com/X6mAnkaQ1P

Round 2? Rain picking up again at Tatum/Cholla where drivers were rescued earlier as street flooded. @abc15 pic.twitter.com/9nmH7tEVBA

Headstones and flowers are submerged at Tempe Double Butte Cemetery.
Multiple plots are #flooded .
Can only imagine how the families feel that have loved ones buried here #abc15 #phoenixwx pic.twitter.com/q1IJONhuQS

So...Rosa brought as much rain to #Phoenix the last three days as #Phoenix mostly saw for the monsoon. We will likely see the Rosa total rise WOW! #azwx pic.twitter.com/FJ4p6kTvan

UPDATED MILEPOST:
*** CLOSURE ALERT *** I-17 SB closed for short period from milepost 252-246 to clear debris left by storms. This is south of Bumble Bee in the Sunset Point area. #phxtraffic #aztraffic pic.twitter.com/gpx4dnFOPd

Heads up! @phoenixpolice is directing traffic around a sinkhole that opened up in the middle of 35th Avenue and Cactus. #abc15wx pic.twitter.com/2WVGxizpY7

SR 238 remains closed due to heavy rains, but the closure has shifted from milepost 24-38 to milepost 24-44. #aztraffic pic.twitter.com/tIKYOQ6Cq9

UPDATE: Rescue crews were able to pull the man from the wash. #abc15wx pic.twitter.com/OW7wsDKdU0

Scottsdale Fire crews are working to pull a man from a running wash near McDowell and Miller roads.

Please avoid the area of 35th Avenue and West Cactus Road. The intersection is closed until further notice in all directions due to storm related damage to the road. #PhxTraffic #PHXStorm @phoenixpolice pic.twitter.com/DS67EYVwmV

Rapids flow over main road in thunderbird farms area of Maricopa. A man had to be rescued from this area earlier this morning when his truck got stuck. We’re told it’s 15 feet deep. @abc15 pic.twitter.com/mu2wn0SNsX

Hayden Road is closed southbound between Chaparral and Camelback roads due to heavy rain and high water. Please use an alternate route and drive safely. #traffic #stormupdate #Scottsdale

#Rosa leaving her mark on the record books... Up to 2.63" so far! Stay safe out there today. #AZwx #ABC15wx pic.twitter.com/SI5aNQmTVK

Tomahawk and baseline restricted due to flooding. #ajtraffic

Tonight's National Night Out event has been rescheduled due to inclement weather. Please join us on October 17th in connection to the 12th Annual Walk Away from Drugs & Keep Kingman Safe Expo! https://t.co/1qgozOa1Le

Phoenix just had its 2nd wettest October day and 9th wettest day ever with 2.24" (so far). #azwx pic.twitter.com/tHojYDAi0a

🚧🚨🚧🚨 UPDATED INFORMATION as of 12:30pm: Here are the latest street closures. There are many... so keep this link handy as it is updated regularly. https://t.co/PWsDYOn6Hi pic.twitter.com/SMged38VRr

UPDATE: I-17 and Peoria: Underpass at Peoria has reopened in both directions. #phxtraffic pic.twitter.com/NVM3fn1MK1

Honeycutt road between White & Parker is now open in both directions. https://t.co/N8MWal96Vj

Showers redeveloping in the west and northwest Valley. You'll need the umbrella if you're headed out to lunch. Still a lot of flooded roadways across the Valley, so be careful! #abc15wx #azwx pic.twitter.com/YaFwk1aE7f

JUST IN: Maricopa Community Colleges closed due to weather.

#Storm Update: Cactus Park and Aquatic Center has been closed due to standing water.

@ArizonaDOT cleanup operation underway as last of runoff is clearing at Peoria underpass under I-17 pic.twitter.com/FqU5z7VPuG

Cause: service interruption to a major power line. https://t.co/oqFPQKahTy

Wow! This is a look at Riggs Road west of I-10. Gila River Fire posted this photo to their Facebook page. #abc15wx pic.twitter.com/CqXcS4TVfb

Shea Blvd at 40th street. This water is headed across Tatum Blvd and east into Indian Bend Wash. Please avoid the area and let the emergency responders do their work. #BeFloodSmart #azwx https://t.co/3UpiRNBbIV

The following streets are closed due to flooding:
Invergordon and Horseshoe
Tatum and Arroyo Verde
8600 block of 61st Place
40th Street and Stanford Drive
Doubletree Ranch Road at the Indian Bend Wash.

Please be cautious on Shea Blvd near Tatum. Tatum Basin is nearly full. Phoenix police are at location to monitor and barricade the road if necessary. #azwx

#STORM UPDATES: All unbridged crossings of the Indian Bend Wash are closed. McCormick Parkway is closed due to running water between Scottsdale & Hayden roads. Avoid these areas. Always obey traffic signs & do not try to cross running water or flooded areas. pic.twitter.com/dWCgrifTvb

We have officially gotten 2.03 inches of rainfall at Sky Harbor today. This makes it the 5th wettest October so far.... emphasis on the so far! #azwx https://t.co/om28QBFp3M

UPDATE: SR 51 at Cactus: Flooding has subsided on SB side and traffic is getting past. Still some standing water on NB right lanes. Highway remains open in both directions. #phxtraffic #azwx pic.twitter.com/MkXW1c71aQ

UPDATE: Power has been restored to all customers. https://t.co/m3b4Q8fqD8

SR 51 NB/SB at Cactus: Road is flooded. Traffic getting past in HOV lanes. #phxtraffic pic.twitter.com/KD0qgd31Cg

We are only 2 days into October and Sky Harbor is already sitting at the 8th wettest October on record with 2.08" of rain so far. #azwx

The washes are flowing as the rain continues to fall. Please do not attempt to drive through flooded roadways. Our crews shared this video from Buckeye Hills Dr, just north of Robbins Rd. pic.twitter.com/zzyTcM8DYo

Honeycutt Rd is closed between Porter Rd & White and Parker Rd, due to flooding. #CopaTraffic pic.twitter.com/utbS8CmMtI

Service alert: Your bus route may be impacted by our rain-soaked streets. We apologize & want to get you safely to your destination. At your stop, be sure to be visible to bus operators. @valleymetro rail may also experience delays this AM #vmservice #vmcares #PHXflashflood

Traffic is a mess at i17 and Peoria, the underpass is flooded and traffic is being redirected. #abc15 #abc15wx #stormchasing pic.twitter.com/6TpYYtVx9T

827 am: Radar shows most of the rain across the central valley. Be aware and use extra caution. #azwx pic.twitter.com/2rNxnpHUQh

We currently have an outage affecting approximately 2,000 customers in the far West Valley. Please check for updates and restoration times on the outage map available in the power app or online at https://t.co/vkGMKagOS6

Lot of standing water on 75th Ave near Glendale. Hard to see where the sidewalk ends in some spots. #abc15 #abc15wx pic.twitter.com/nYsu7peTeW

ALERT: Flash Flood Warning for most of the Phoenix Metro now in effect. Central Phoenix and most of the west Valley included. Until 10:30am. Flash flooding is imminent if not already happening. "Turn Around, Don't Drown" #abc15wx #azwx pic.twitter.com/9ThUJSoTmO

RECORD BROKEN: Phoenix has now picked up 0.64 inches of rain since midnight, breaking the record for the most rainfall ever recorded on this date! Previous record was 0.60 inches back on this date in 1981.
Storm total at @PHXSkyHarbor at 1.03 so far since Sunday. #abc15wx #azwx pic.twitter.com/X4xKNjOqoe