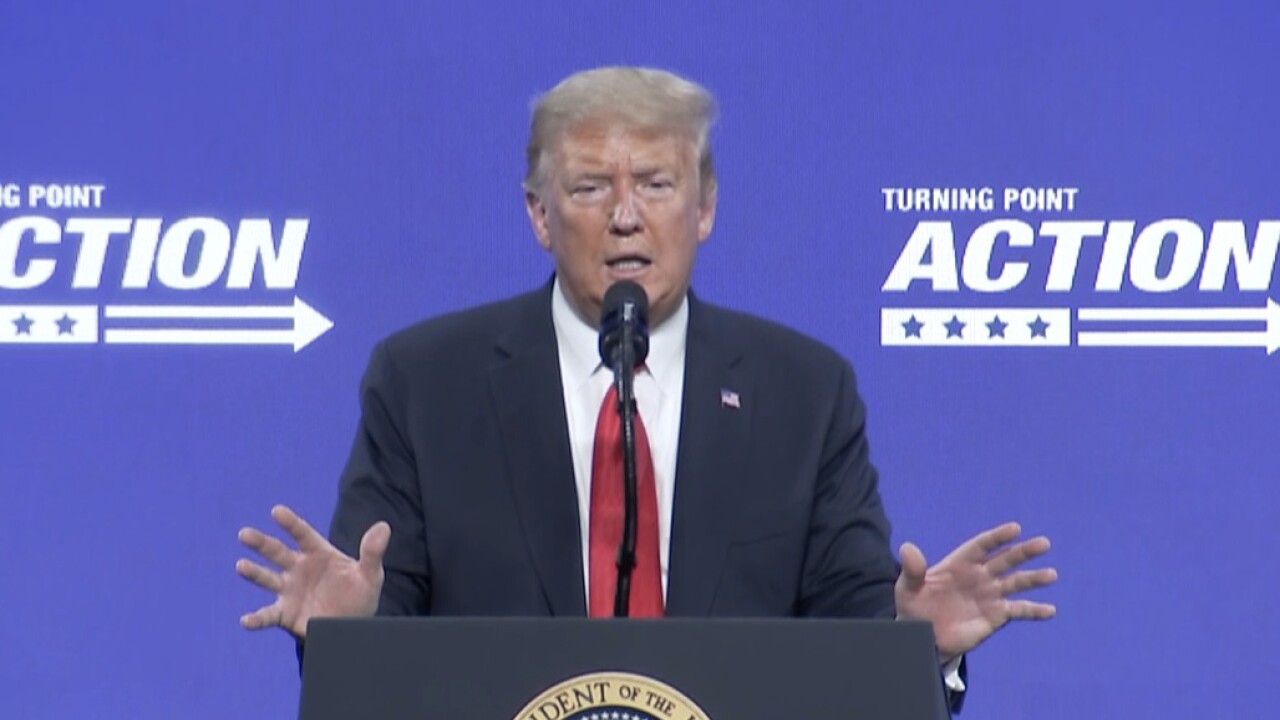 PHOENIX — President Trump wrapped up his visit to Arizona Tuesday evening, following a stop in Yuma to visit the border wall, as well as delivering remarks at a "Students for Trump" event in north Phoenix.

Watch full coverage of his stop in Phoenix below.

Below are full updates from Trump's visit to Yuma and Phoenix:

President Trump has finished speaking and the "Students for Trump" event has concluded.

@PhoenixPolice just declared the protest an unlawful assembly. They’ve fired tear gas into the crowd outside a campaign rally for @realDonaldTrump #abc15 pic.twitter.com/uJ2D0N0Y3L

Phoenix police have declared an unlawful assembly where protesters have gathered near Dream City Church, where President Donald Trump is speaking at a student rally.

An Unlawful Assembly has been declared in the area of Cave Creek and Sharon due to criminal activity and a current danger to our community. Please leave the area including sidewalks, private property or roadways. pic.twitter.com/3kVfZxgFUx

Trump praises Gov. @DougDucey at his Phoenix rally.
“A great gentleman...I said to him, ‘Governor how am I doing?’
He said ‘you’re doing really well.’”

As @realDonaldTrump takes the stage, protestors gather outside church entrance. @PhoenixPolice keeping a close eye on group as they try to walk on property. #ABC15 pic.twitter.com/mHbTrooL15

Protests outside Pres. Trump campaign event moving away from freedom of speech zone outside #DreamCityChurch and into the streets. #ABC15 pic.twitter.com/ZbVThi0wK3

Protesters arguing with those stuck in traffic outside. #Trump2020 #MAGA2020 #protests2020 pic.twitter.com/eJ4HBGqkXj

The President has landed and protesters are marching towards Dream City Church & the nearby “freedom of speech” zone @ABC15 pic.twitter.com/ViLnxgQoWl

The question of will @dougducey lead by example with a 😷.

Besides that, few and far between.

President Trump will take the stage in Phoenix in a few hours to speak to students and young voters. Our crew will be outside the venue for the event, we've been speaking to supporters & will have reports at 4, 5 & 6. @abc15 #abc15 pic.twitter.com/Zn3i1vPCbx

This is the VIP line for the @realDonaldTrump rally this afternoon in Phoenix. Some have a mask, clearly not all. @MayorGallego says the event isn’t following CDC guidelines for Covid-19. President Trump says he doesn’t believe this rally is putting anyone in danger. pic.twitter.com/grPtYjcqf6