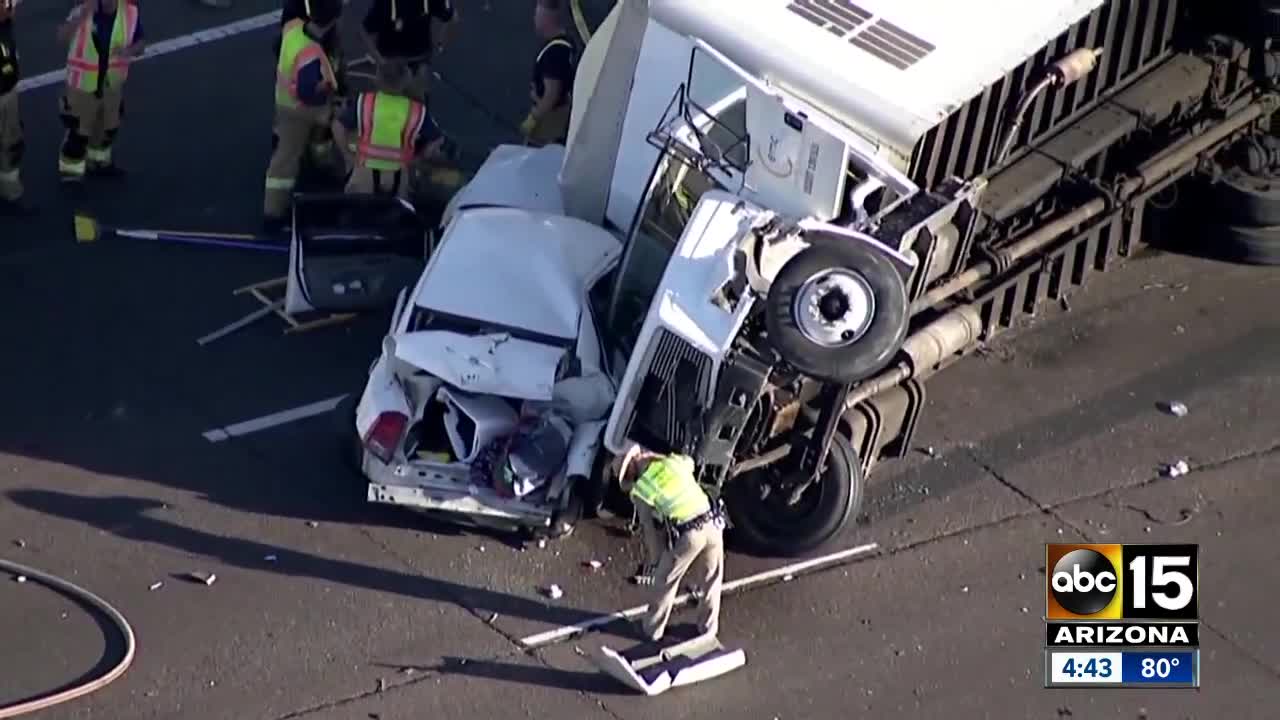 Man pinned underneath truck on Interstate 10 off Ray Road Monday. PHOENIX — "I didn't expect anybody to be under that truck and actually survive."

Those are the thoughts of Ricky Lyons, who found himself at the right place at the right time on Monday afternoon -- around 3 p.m. near Interstate 10 and the Ray Road exit where a tractor-trailer overturned, trapping another person beneath it.

"It was probably one of the scariest moments of his life," he said. "I just wanted to be a friend in that moment."

The crash closed the westbound lanes of Interstate 10 for hours on Monday with traffic pushed back to the Loop 202 (SanTan Freeway) at one point, according to tweets from the Arizona Department of Transportation. Three hours later, three of the lanes had reopened. All lanes have since reopened.

I-10 WB near Ray Road: Multiple lanes blocked due to a serious crash. #aztraffic pic.twitter.com/eeFXip4Ige

Lyons told ABC15 that he saw the crash happen. Instead of driving by, he jumped out of his car and hoped that he would be able to help.

He said he heard muffled screams and noticed someone's feet sticking out.

While first responders were discussing strategy, Lyons said he got on the ground and crawled towards the source of those muffled screams.

"I didn’t think about doing it. I just did it and I would want somebody to do it for me," he said.

There he laid next to the man pinned underneath and tried to comfort him, he said. Lyons said he asked about the man's family, his job, and reminded him that help was on the way.

“Knowing that he had somebody there with him, even though he may not have been able to physically see me; he could hear my voice and I’m sure that helped him a little bit," said Lyons.

First responders had to use a saw to cut through the metal panels of the vehicle to reach the trapped man and pull him through, he said. Lyons, who said the man's first name was Gustavo, but did not know his last name, hopes to meet him again one day.

“I’d love to meet him. I would love to actually shake his hand. Not to be thanked or not to be praised, but just to meet a new friend," he said.

A spokesperson for DPS told ABC15 on Tuesday that one person was transported to the hospital and that the person's injuries were believed to be non-life-threatening. No further updates were available. The cause of the crash remains under investigation, according to DPS.