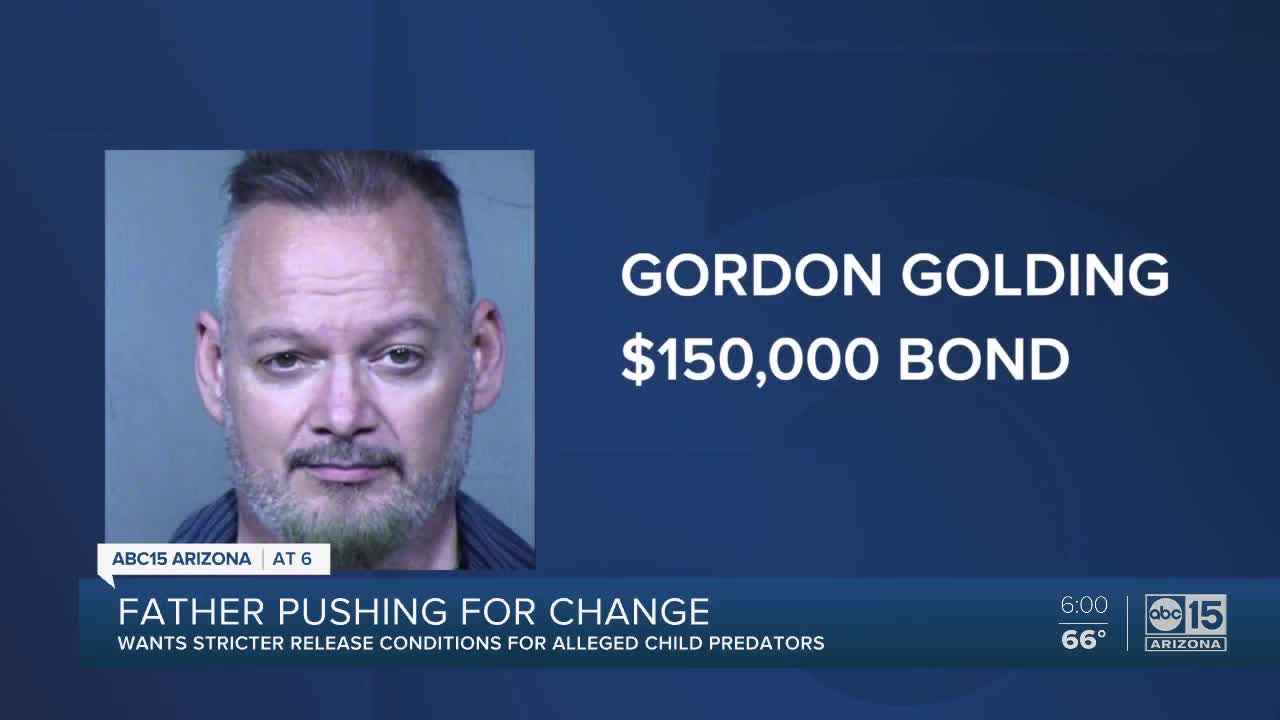 A Valley father marched with signs out front of the Arizona state capitol, urging lawmakers to make it tougher for accused child predators to get out of jail as they await trial.

PHOENIX — A Valley father marched with signs out front of the Arizona state capitol, urging lawmakers to make it tougher for accused child predators to get out of jail as they await trial.

Gordon Golding, 54, is currently facing 44 charges, including sexual conduct with a minor.

The father of one of the alleged victims, took to the state capitol on Monday to try and prevent that from happening in future cases.

"It's rough," the father said. "I just want to make the change. I couldn't protect my daughter but I'd like to protect anyone else's kids."

"If there was six murders against somebody, he'd be a serial killer," the father said. "Why can't he be a serial pedophile and no bond available?"

Experts say there are lots of factors when judges decide on bail and bond amounts.

"The judges have to know, of course, they do know, the Arizona constitution says that every single person has a right to bail or bond, except for certain categories," said Valley Attorney and KTAR Legal Analyst Monica Lindstrom.

Lindstrom says judges also look at other issues as well.

The father in the case involving Golding hopes future suspects of similar crimes find it more difficult to get out of jail.

"I like to call it, what my initiative is, the predator law," the father said. "If there's two or more kids on the same case, he gets locked up with no bond."

That father reached out to his state representative on Monday hoping to inspire change.

Gordon Golding is to be presumed innocent of these charges according to our constitution. Our constitution also states that there is a right to bail. Under the Arizona Rule of Criminal Procedure, the bond amount can not be set at an amount to prevent someone from being released solely because the person is unable to pay. After an extensive argument and review of Mr. Golding's release conditions an appropriate $150,000 secured appearance bond was ordered. Mr. Golding's current release order is for the $150,000.00 secured appearance bond along with other restrictions. This case is still in the early stages and is being investigated however, one of the victims has already made statements to the Court that she lied to Mr. Golding about her age claiming to be older than she really was, which is another factor taken into account to determine Mr. Golding's release conditions. There are three sides to this story, his, hers, and the truth. Mr. Golding has a right to remain silent and he will continue to maintain his innocence while the alleged victim's families continue to tell 'her' side.