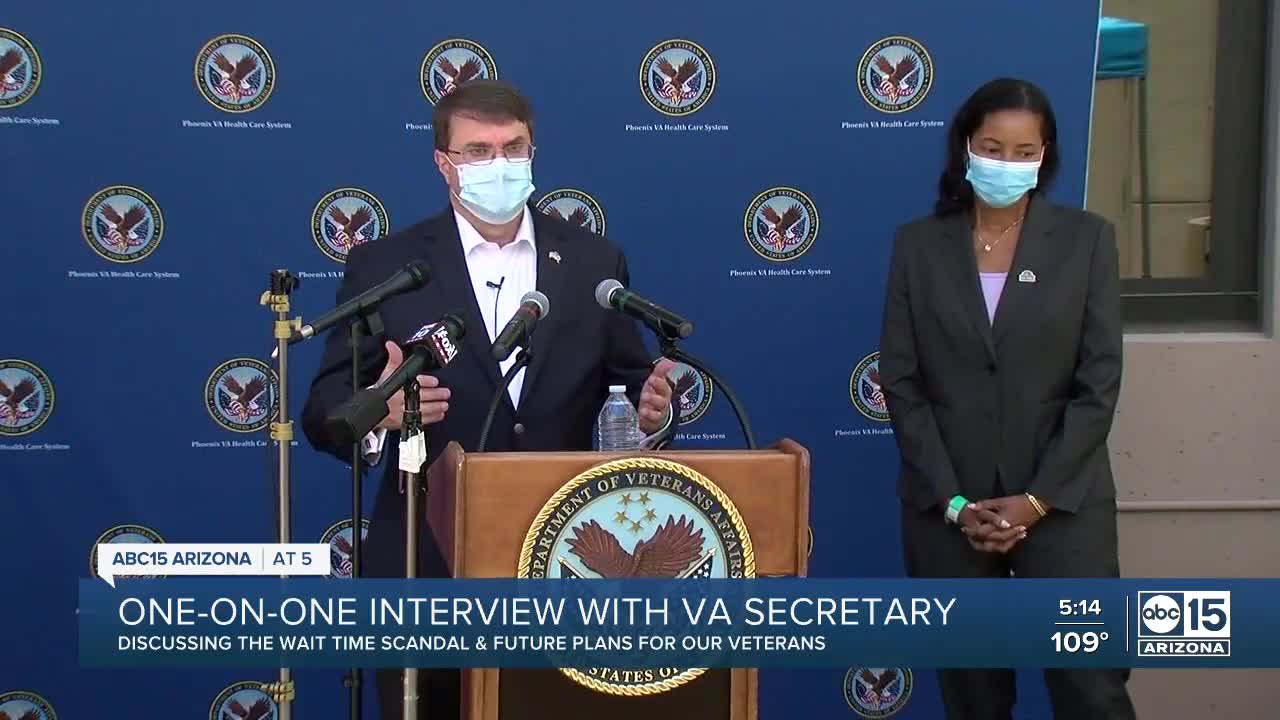 ABC15 holds one-on-one interview with the VA secretary about the latest efforts to bounce back from the wait time scandal.

PHOENIX — From failing to most improved, U.S. Secretary of Veterans Affairs Robert Wilkie says a lot of changes have been made over the last six years to better operations at the hospitals and clinics that serve our veterans.

Secretary Wilkie was in Phoenix last week, touring Phoenix and Tucson hospitals. While Wilkie has been on the job since 2018, his agency has been under federal scrutiny for several years. That was especially true in Arizona, where the wait-time scandal of 2014 resulted in the death of many veterans who died before they were able to get an appointment at the VA hospital.

Wilkie sat down for an exclusive interview with ABC15 during his visit to Phoenix. He talked about the changes his agency has made and where he hopes to take things in the future. Willkie said veterans were "voting with their feet" by choosing the VA as their hospital of choice. Nationwide, VA hospitals and clinics are seeing a record number of veterans coming in for treatment. In Phoenix, a record was set last year with 1.2 million appointments made at area VA hospitals and clinics.

Those new numbers are from data collected through surveys that were given out to members of the Veterans of Foreign Wars organization or VFW.

Secretary Wilkie told ABC15 since he took over the second-largest federal agency in the country, his goal has been to put heart behind their mission and to hire more people who can speak the language of a veteran. He said that starts at the top with him.

He added that in the past, Veterans Affairs was populated by people who wanted to put a fancy Washington, D.C. title on their resume. He believes he has changed that.

"I wanted to change the organization – to one that existed with Washington, D.C. bureaucrats issuing directives from a 10th floor office – to one that was from ground up," said Wilkie.

However, changing an agency's culture takes time. Over the last three years, ABC15 has received complaints from several veterans who said they were still experiencing problems at the VA.

In January, ABC15 spoke to Bill Ortman, a Vietnam War veteran who reached out to a news station in desperation. He said he was suicidal, but was unable to get an appointment with a psychologist at the VA. He told ABC15 he had been trying to get an appointment for several months and did not feel life was worth living anymore.

"I am lucky enough to have the resources to be able to contact someone like you, but I think of all the veterans who can't. What will happen to them? Who will help them?"

Ortman was finally able to see a psychologist after ABC15 reached out to the Phoenix VA with his concerns.

Before that, in July of 2019, Iraq war veteran Brent Phillips reached out to ABC15 saying he had stopped going to the VA. Phillips, who is a purple heart recipient, was injured in an explosion in Iraq when his unit came under attack. When he returned home, he went to the VA to seek treatment for his PTSD. However, every time he showed up, he was facing a different psychologist, including one located in another state via Tele-health. He found it was very impersonal.

"I guess I thought this is just the way it is. They have a shortage of doctors you know," said Phillips. He also said he had not complained about the situation to managers or supervisors at the VA because he thought it would not help his situation.

Phillips was able to get back into treatment for his PTSD, but only after top officials at the VA heard his story on ABC15.

ABC15 brought some of these local stories to Secretary Wilkie's attention. We asked him, as a veteran himself, could he understand the plight of another veteran who may find it difficult to share painful memories with someone they've never met before.

"So, we're working on that. We've broken through the old federal compartments when it comes to salaries. We pay our people more. They have higher salaries at that medical level than I have," said Wilkie.

He also stated that they were trying to hire and retain employees, but that was tough, especially in the mental healthcare field where there was a nationwide shortage of medical professionals.

"I will say mental health is America's problem; we don't have enough providers," said Wilkie.

He also mentioned that morale had improved among staff at the VA.

"In the last administration, we were 17 out of 17 in terms of best places to work. In the last year and a half, we've moved from that to number 6. So, the employees feel it and if they feel it, then the veterans will feel it," said Wilkie.

The VA has also expanded telehealth services to reach out to veterans who need immediate access to mental healthcare. Wilkie said the federal agency was partnering with Walmart and other Veterans service centers to create telehealth clinics inside those facilities. The agency has also just hired 18,000 new employees. Wilkie did not know how many of those employees were coming to Arizona.

"I can't give you the exact number, but one of the incentives is when you apply and you're accepted is if you want to stay in your home area, we'll let you do that," said Wilkie.

In the end, though, Wilkie said that he knew the VA was still far from perfect.

"Now in a system as large as ours where we have 9.5 million people, will there be a hiccup? Absolutely. Are we perfect? No. Are we as good as any healthcare system in the country? I would say absolutely," he said.

An accomplishment Wilkie said he was especially proud of was digitizing the healthcare records of veterans. His agency is working with the Department of Defense to get electronic records into a database on all veterans starting from the moment they begin serving in the military. Wilkie believes this would give doctors instant access to a veteran’s history of injuries and medical. He also thinks that would help cut out many problems, confusion and miscommunication in the system.