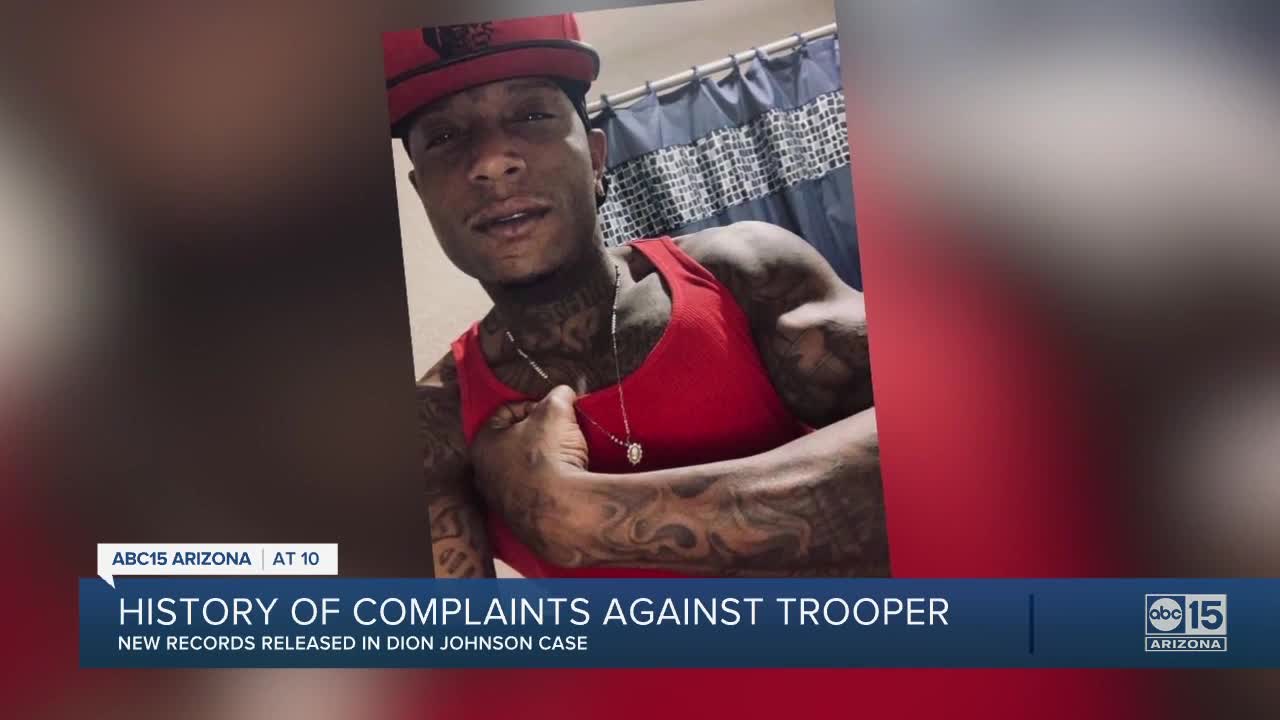 Documents show a long history of complaints against the trooper that shot and killed Dion Johnson.

PHOENIX — After more than six weeks, the Arizona Department of Public Safety (DPS) released some records in connection with the shooting death of Dion Johnson.

The 28-year-old was killed Memorial Day by Trooper George Cervantes after he was found asleep in a car near an interstate on-ramp at Loop 101 and Tatum.

The initial scrutiny was on Johnson, his prior convictions, and his potentially criminal actions before the shooting. Now, the limited DPS records have turned the spotlight on to Trooper Cervantes and his time with the department.

In his 15 years with DPS, Trooper Cervantes has 13 complaints against him.

October 2010 - external complaint of "discourteous treatment of the public or other employees." No discipline.

December 2010 - internal complaint of "inefficiency." Sustained and given 'letter of instruction.'

November 2011 - preventable accident as a result of "inefficiency." Sustained and given PPR/counseling (Personal Performance Report).

Misuse or unauthorized use of state property - sustained on two counts.

Conduct adverse to the department or employee - sustained on two counts.

For the multiple violations Cervantes was disciplined with a 'Letter of Reprimand' and an 80-hour suspension.

January 2013 - preventable accident as a result of "inefficiency." Sustained and given Letter of Instruction.

November 2014 - preventable accident as a result of "inefficiency." Sustained and given PPR (Personal Performance Report).

March 2015 - preventable accident as a result of "inefficiency." Sustained and given Letter of Instruction.

October 2015 - external complaint of "discourteous treatment of the public or other employees." Sustained and given PPR/counseling.

August 2019 - external complaint of "discourteous treatment of the public or other employees" and "conduct adverse to the department of employee." Both were not sustained. No discipline.

May 26, 2020 (the day after the Dion Johnson shooting death) - external complaint of "conduct adverse to the department or employee." It appears to be an open complaint.

It is worth noting that this internal affairs document is the 'concise employee history' and not Cervantes' full file, which would provide more details about the complaints, the potential misconduct, the investigations, and the discipline rationale.

Despite more than six consecutive emails requesting the information, and formal records requests, DPS has not released Cervantes' department photo or the internal affairs investigation into the Dion Johnson shooting, which is completed and public record.

Phoenix Police have also not released their external, criminal investigation into the shooting, despite it being complete and already referred to the Maricopa County Attorney's Office.

Trooper Cervantes is heard talking to a dispatcher as he is approaching Dion's car.

"Just for the record there's a heavy odor of alcoholic beverage. He's urinated all over himself. And there's probably open containers in the vehicle - there is," says Cervantes.

Less than 40 seconds after Trooper Cervantes was looking through Dion's car, he yells on the radio that he has fired shots. It is unclear how many times he fired, or how many times Dion was hit, because Phoenix police and DPS have not answered ABC15's repeated requests for the information.

One thing that has confounded the Johnson family attorney, Jocquese Blackwell, is just how much allegedly transpired, according to the police narrative, in the short time period of 40 seconds.

Phoenix police released the following statement about the details leading up to the shooting:

"During the Trooper’s initial contact with Mr. Johnson, he found him passed out in the driver’s seat. The Trooper smelled an odor of alcohol, saw beer cans and a gun in the vehicle. The Trooper removed the gun from the vehicle, returned back to his motorcycle, secured the gun, and then requested a backup. At this point, he noticed Mr. Johnson moving around so he returned to the vehicle and attempted to arrest Mr. Johnson for suspicion of driving impaired. During the attempted arrest, Mr. Johnson grabbed onto the Trooper through the open driver’s side door and an altercation occurred. The Trooper was pulled toward the vehicle, while standing adjacent to the eastbound travel lanes of the freeway. During this struggle, the Trooper told investigators he feared he would be pushed into oncoming traffic, so he drew his weapon and issued commands. Mr. Johnson began to comply but as the Trooper was holstering his gun, Mr. Johnson reached for the gun and a second altercation ensued. The Trooper fearing for his life then fired his service weapon striking Mr. Johnson. A second Trooper arrived after the shooting and assisted in removing Mr. Johnson from the vehicle."

Mr. Blackwell is quick to point out things he views as problematic.

Blackwell also says he has never heard of officers or troopers 'holstering their weapons' before back-up arrives.

A driver called 911 during that small time period though, after Cervantes pulled the trigger but before a back-up trooper arrived. DPS released the public record 911 call for the first time July 13, roughly seven weeks after it was made.

"There is an officer alone on a motorcycle that is having difficulty with a passenger," the woman tells a dispatcher. "His bike is almost in the driving lane and he is physically trying to restrain this guy in the driver seat...I had to swerve out of the lane not to hit him. And I had cars behind me...He just keeps trying to restrain that guy and I can hear him yelling at the person in the vehicle."

While the release of the records is meant to provide some answers, for Blackwell, Dion's family, and many protesters demanding justice, it raises more questions.

“We just want answers, the right answers,” said Camille Landrum, Dion’s sister. “We want justice because this officer is clearly just a monster.”

“I wondered why he couldn’t of been fired long ago,” said Erma Johnson, Dion’s mom. “This wouldn't have happened to my son now.”

“Why do you have to resort to using lethal force minute when he had a taser?” said Jocquese Blackwell, the Johnson family‘s attorney. “Why did they wait so long to give Dion Johnson medical aid?”

As ABC15 was the first to report, the criminal case now lies on the desk of Maricopa County Attorney Alister Adel. Her office says they are 'prioritizing' the case.