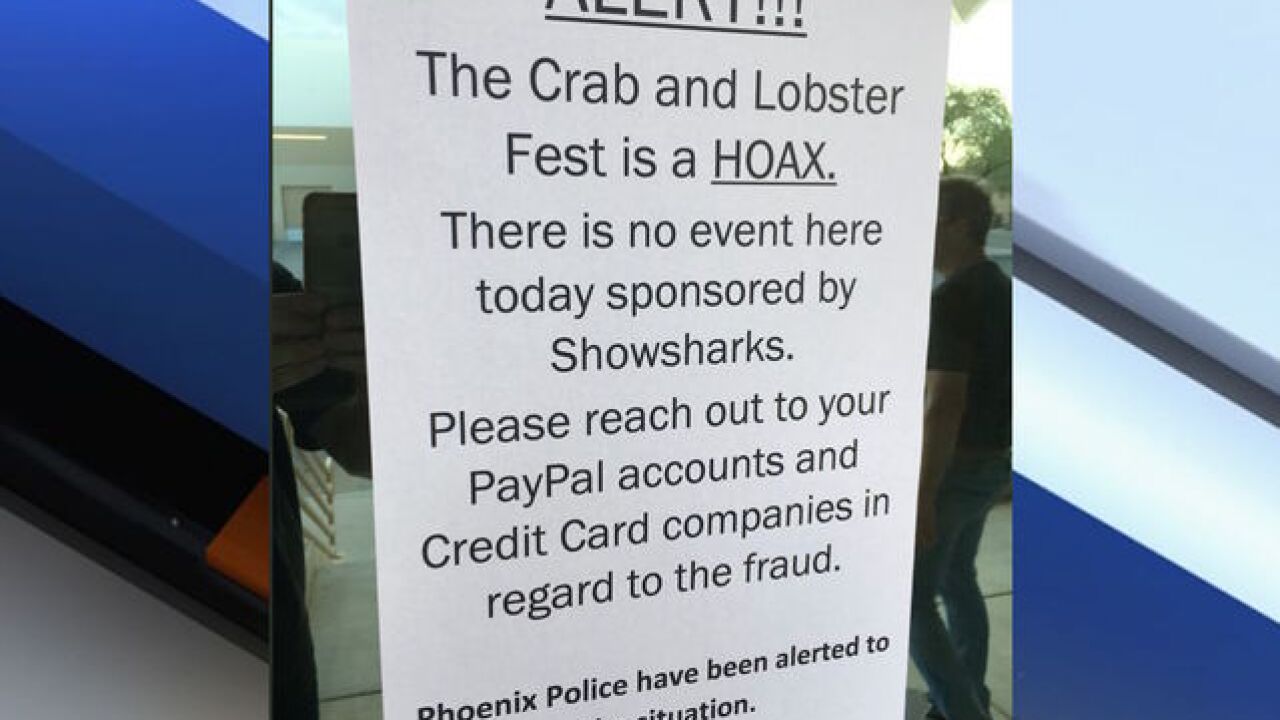 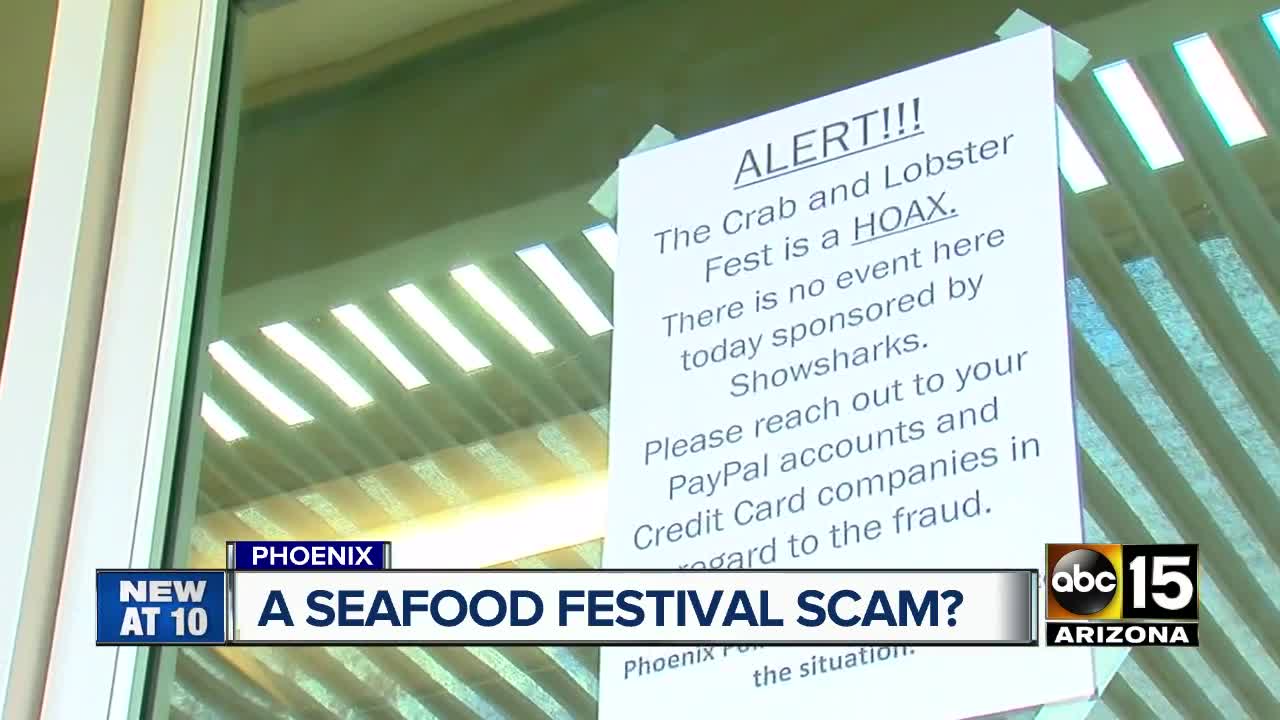 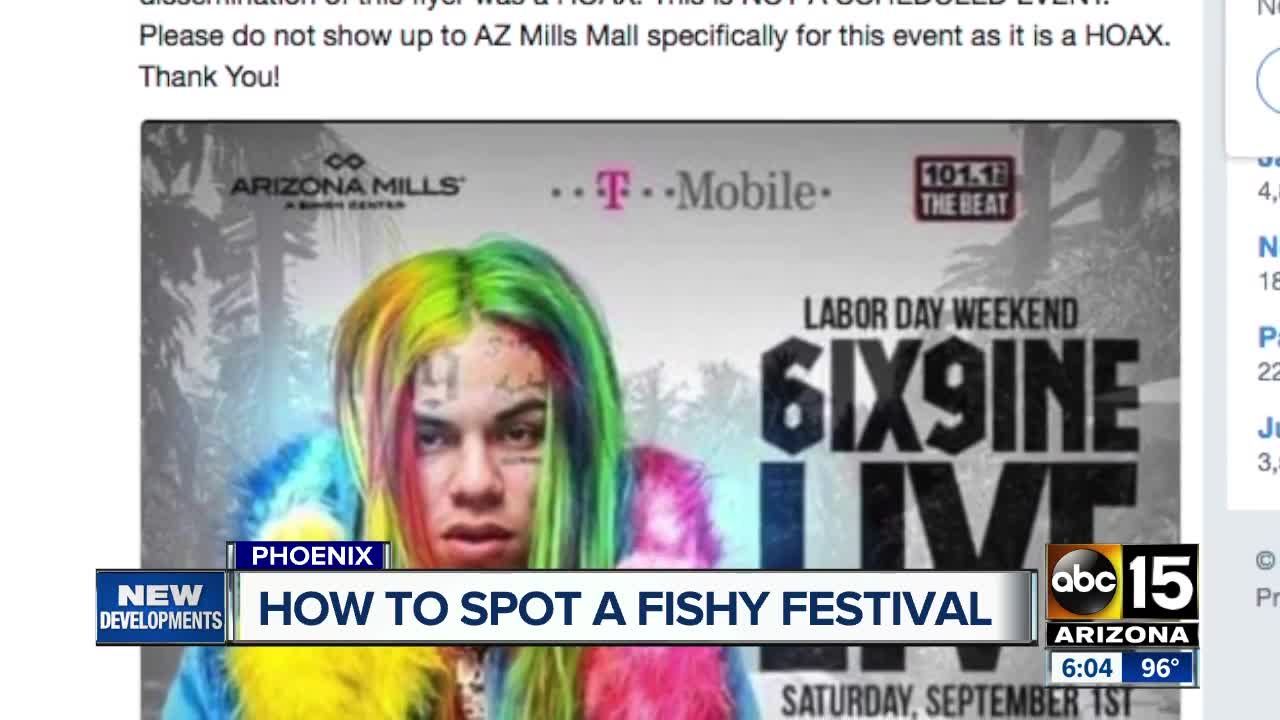 It's a festival that's leaving a bad taste in customers' mouths, but no food in their stomachs.

More than a dozen people told ABC15 they believe they are the victims of a scam. They purchased tickets online to the "Crab and Lobster Feast" advertised as "All you can eat fresh steamed crab and lobster, sides drinks, and more!"

When customers arrived at the address near 32nd Street and Broadway on Sunday, they found an empty warehouse and parking lot.

"I'm like uh oh, I think this is not going to be good," said Garrett McCray, who says he was surprised to find an empty lot when he showed up to check out the event. "I was like I can't believe I fell for this."

McCray and others shared a similar frustration. Customers, some who showed their receipts, told ABC15 they paid between $30 and $60 a ticket.

"I think it's that value stamp behind it that they figured people will pay for this, and we did," said Laurie McCracken, who drove from Maricopa.

On the event website, the company putting it on is named "SHOWSHARKS" with a Los Angeles address. ABC15 was unable to find a valid phone number for anyone associated with that company and an e-mail went unreturned.

"Shame on them," McCracken said. "I want my money back."

On Sunday, an ABC15 crew saw several vehicles drive through the parking lot as customers were left bewildered, wondering if the event was around the corner, or on the other side of the building.

"Got scammed," said Jeff Baltzer, who bought two tickets. "It was a scam."

The event website indicates tickets are sold out. Frustrated customers say they feel for everyone else who also bought tickets and for those who traveled from out of town.

"It's just the ultimate...betrayal of trust," McCray said. "They're laughing all the way to the bank."

While not the company behind the event, customers used the platform eTickets to buy the tickets.

We've also been in contact with ticket holders after recently being made aware of the alleged scam and suspended the related account as soon as we were informed.

The eTickets platform itself only provides the shopping cart functionality for ticket purchases - all financial transactions are handled by PayPal so they would have the full details on the organization and we recommend that any affected purchasers contact PayPal or their bank to request a refund.