Documents: Phoenix police officer admits body-cavity search on woman was against the law 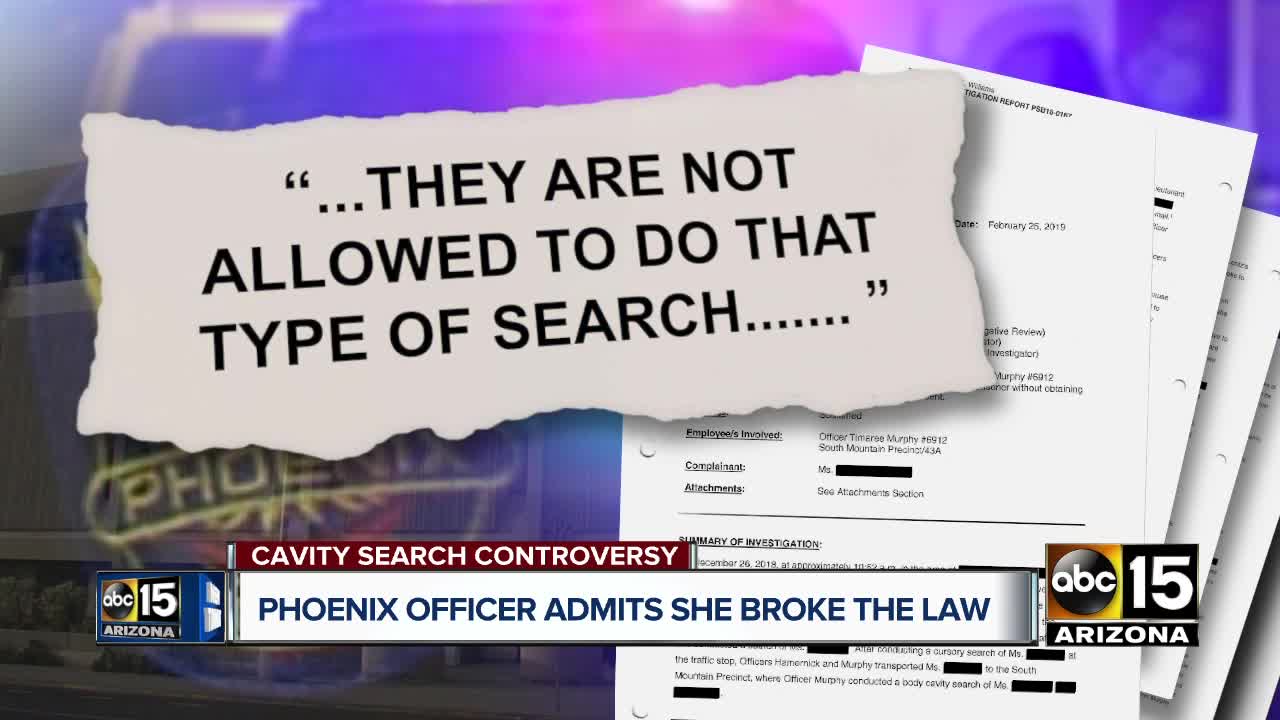 A Phoenix officer admitted she broke the law when she committed a body cavity search on a woman without her consent.

PHOENIX — Erica Reynolds was pulled over by Phoenix Police in December of 2018. Officers suspected her of buying drugs from a known dealer, but found nothing when they searched her and her car.

Phoenix Officers Jason Hamernick and Aaron Lentz, named in an internal investigations report obtained by ABC15, then called a female officer to the scene for a "full search". Officer Timaree Murphy responded, and later followed the others to the South Mountain Precinct, where the report says she performed a body-cavity search on Reynolds.

Reynolds came forward with allegations of the illegal search in June alongside her attorney, Heather Hamel, who announced the intent to sue the city of Phoenix for $12.5 million for violating Reynolds rights. Reynolds said she was rushed to the hospital following the search, and has severe internal injuries as a result.

The report includes a summary of an interview with Officer Murphy several months after the alleged incident.

“Officer Murphy told PSB investigators she did not obtain a Search Warrant or consent prior to conducing [sic] the body cavity search. Office Murphy also stated she does not have any medical training related to conducting body cavity searches.”

Murphy though, said she did bring up some concerns prior to the search.

Phoenix police confirm Officer Murphy was investigated and subsequently suspended for the violation of policy. Phoenix police policy states, "physical intrusion will be conducted by virtue of a search warrant, or by consent of the suspect and then only by a medical doctor."

The department's investigation concluded that "the incident involved the inappropriate use of police powers, authority, and privileges."

Department officials wouldn't say whether or not Murphy is still suspended or why none of the other officers involved were investigated.

“These officers are still out on the street," said Hamel. "They are still conducting investigations, they are still authorized to conduct searches. That should make every member of the public really terrified about what a potential interaction with a Phoenix police officer would look like.”

No drugs were ever found during the search of Reynolds. She was released and has not been charged with a crime.

Reynolds was under surveillance, according to a probable cause statement, of suspicion of illegal drug activity. The department said she's also a "person of interest" in a separate investigation being headed by the Attorney General's office. However, no charges have been filed against her.

Phoenix officers arrested Reynolds again in February and released audio recordings of an interview where she allegedly admits to have hidden drugs from law enforcement.

Hamel, Reynold's attorney, said she questions the legitimacy and timing of that admission, adding that Reynolds had just walked out of major surgery.

"The police can't sexually assault you because they suspect you of wrongdoing," said Hamel. "What they claim to know after-the-fact doesn't justify what they did."