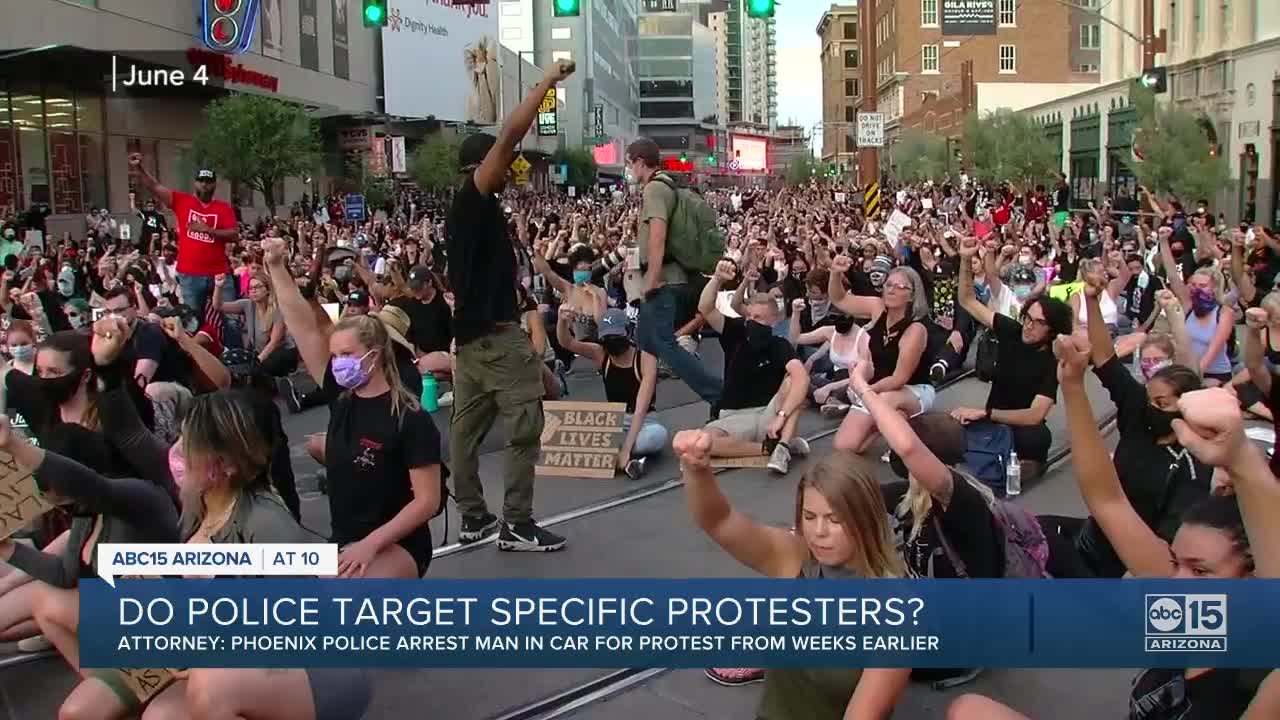 PHOENIX — One of the leading voices in the local protests against racial injustice is set to be released from jail after spending a week behind bars. Friends, family and his attorney said he was being held for political reasons.

Lee Percy Christian was one of a handful of protesters arrested on October 3 for obstructing a thoroughfare, but Christian's charges included crimes allegedly committed in August.

Initial court paperwork says Christian was arrested while riding as a passenger in a vehicle for actions on August 9. Police say on that date, he pulled a woman away from officers, who were trying to arrest her. Based on video surveillance, Christian was charged with two class five felonies including hindering a prosecution. He was also charged with unlawful assembly.

Monday, a Maricopa County Judge granted him bond at $2,000, ten days after being arrested. All the other protesters arrested back on October 3 were released shortly after being taken into custody.

"What changed? What changed in seven days, right? What changed this last week and some change?" said Bruce Franks Jr., a close friend to Christian and fellow activist. "Nothing changed but the political pressure from us now."

Monday, Christian's friends, family and attorney, Christina Carter, demanded the charges be dropped. "The justice needs to continue with these charges being dropped against all of these protesters and with the political prosecution we have seen, and protesters being targeted purely on their political opinions and participation in first amendment activities," said Carter.

The Phoenix Police Department respects the rights of all community members who choose to exercise their First Amendment Right. Since demonstrations began on May 28, 2020, we have taken steps to work with organizers to ensure the safety of demonstrators, residents and property in the area of the activity. The department also released guidelines on demonstrations [phoenix.gov] in an effort to keep our community and officers safe.

Unfortunately, there have been those in the community who continue to be involved in criminal activity. On October 3, 2020 at approximately 3:30 p.m. officers responded to the downtown area for a planned demonstration. Hundreds of demonstrators spilled onto the street, unlawfully blocking the roadway. Officers observed a vehicle traveling northbound on 3rd Avenue at Jefferson Street attempting to make a turn when several demonstrators stopped the vehicle, screaming at the occupants. The vehicle accelerated from the group and was able to continue east onto Jefferson St.

At approximately 5:00 p.m., the same group walked on Jefferson Street to 7th Avenue and blocked the whole roadway. They then blocked 7th Avenue preventing traffic from traveling on this major thoroughfare. Vehicles were honking at the demonstrators as they continued walking on 7th Avenue. The group arrived at Police Headquarters, blocking all of Washington Street for approximately 3 hours, which in turn caused traffic to be diverted by officers for 3 hours. Several people chained themselves to a coffin which was placed in the roadway. At approximately 8:00 p.m., the majority of the demonstrators had left, however a handful remained.

This group was approached while they were in the area of 3rd Avenue and Washington Street. Officers attempted to take this group into custody but several of them ran from officers. These individuals included Sarra Tekola, Keisha Acton, Camille Johnson, Tate Peak, Justin Schollmeyer and Jaclyn Avallone. These individuals were arrested for obstructing a public thoroughfare, resisting arrest and hindering prosecution.

Officers also arrested Lee Percy Christian. There was probable cause to arrest Christian for criminal activity which he was involved in from a demonstration on August 9, 2020. Officers arrested Christian without incident during a traffic stop. Both the driver and Christian stepped out of their vehicle on their own. At no time did officers pull or scream at them. Two officers did un-holster their handguns but never pointed them at the occupants of the vehicle. Once Christian was placed in handcuffs the driver of the vehicle was immediately released and left in her vehicle a short time later.

Franks Jr. shared what appears to be body cam footage of a Phoenix police officer calling for fellow officers to arrest him during a protest.

Christian was set to be released sometime Monday evening after posting bond.