Wait, was that downtown Phoenix in Disney's 'Noelle' trailer? 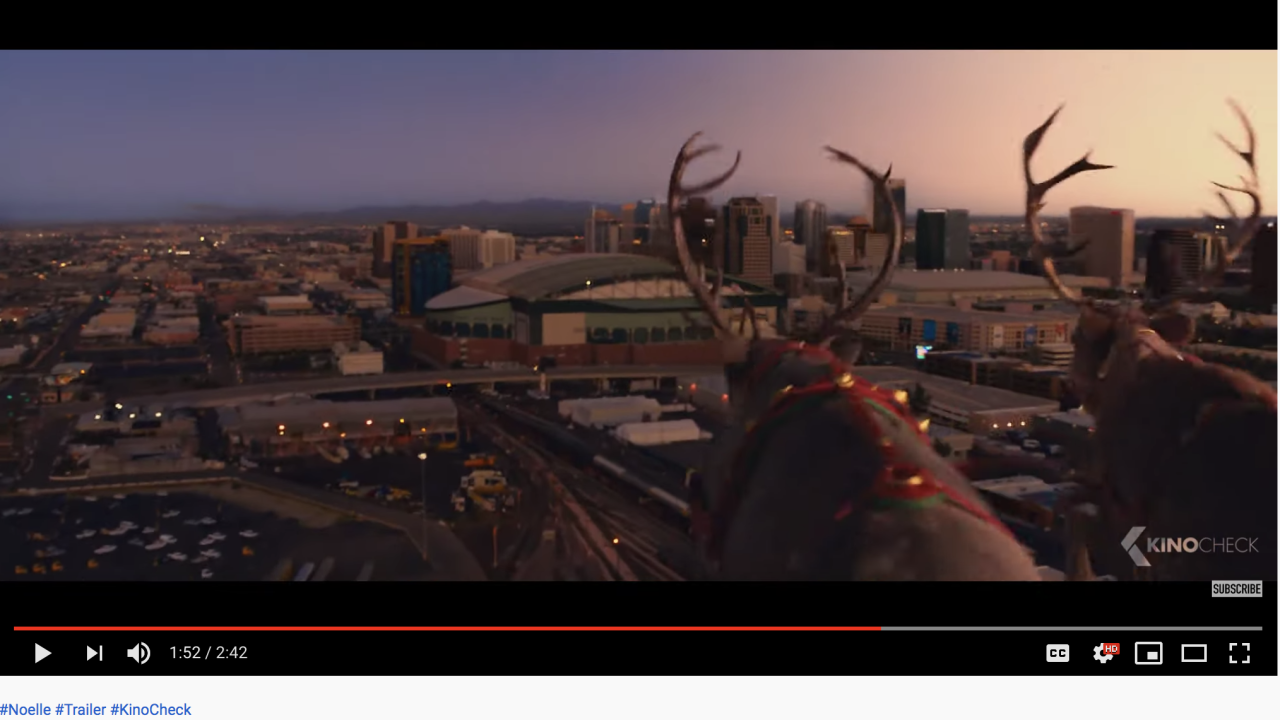 PHOENIX — Over the weekend, Disney made a number of announcements at its yearly D23 Expo. Lizzie McGuire is getting a reboot. Black Panther is getting a sequel. The new Marvel-themed land at Disney California Adventure will be called "Avengers Campus" and will include a Spider-Man ride.

We also got our first look at Emma Stone, who got her start at Valley Youth Theatre in downtown Phoenix, as Cruella de Vill in "Cruella," which is going to tell the origin story about the 101 Dalmatians villain (scheduled to be released in May 2021).

But, it was the trailer for Disney's new Christmas flick, Noelle, starring Anna Kendrick and Bill Hader, that had a few of us thinking -- wait, is that Phoenix?

Here is the official synopsis for the film: Kris Kringle’s daughter is full of Christmas spirit and holiday fun, but wishes she could do something “important” like her beloved brother Nick, who will take over from their father this Christmas. When Nick is about to crumble like a gingerbread cookie from all the pressure, Noelle suggests he take a break and get away…but when he doesn’t return, Noelle must find her brother and bring him back in time to save Christmas.

It isn’t Christmas without Santa’s sister. Watch the new trailer for Noelle, streaming November 12 only on #DisneyPlus. pic.twitter.com/MTkIZxKVGp

Look closely at the 1:53 mark. Does that city skyline look familiar? Is that Chase Field?

Philip Bradstock, spokesperson for the City of Phoenix Film Office, confirmed to ABC15 in an email on Monday that crews associated with the project were in Phoenix "for a couple of days in February filming exterior shots for the movie."

"[It] will be interesting to see all that makes it into the film when the final cut is streaming on November 12," he said.

It was not immediately clear if the movie filmed anywhere else in the state. ABC15 has reached out to Walt Disney Studios and The Walt Disney Company for more information, but has not heard back.

The Phoenix Film Office assisted with the exterior shots of Phoenix for the new Disney movie "Noelle" streaming November 12th on @disneyplus. Can’t wait to see the full film and all the other Phoenix locations!#GoFilmAz @AZProdGuide https://t.co/2xqOTqKAIa

Bradstock said there were six projects filming in Phoenix last week, even with the heat, but that most of the area's film industry is made up of commercials, still photography, reality TV specials, such as The Bachelor filming a contestant from here, corporate/industrial shoots, and social media projects.

Because the state does not currently offer financial incentives or tax credits to the major movie studios, the studios will film establishing shots in Phoenix, and will then shoot the majority of the movie in states that offer incentives, said Bradstock. Arizona did offer incentives from Jan. 1, 2006 to Dec. 30, 2010, he said in an email.

In 2016, the Film and Media program, a branch of the Arizona Commerce Authority, opened. It is led by Matthew Earl Jones, the half-brother of actor James Earl Jones.

On its website, the film office writes: "With over 300 days of sunshine, free use of state roads and state parks, pre-negotiated discounts from hotels, rental vehicles, restaurants, and more - plus cash rebates from equipment vendors, Arizona is the right choice for your next production."

Back in 2016, a portion of the Loop 303 was closed over the summer to film scenes for Michael Bay's Transformers: The Last Knight. A spokesperson told ABC15 at the time that the crew was planning to film for two weeks in Phoenix and would then head to Michigan for the rest of the production.

Editor's note: This article has been updated. There is no "Office of Film and Media" at the Arizona Commerce Authority. It is the "Film and Media program."