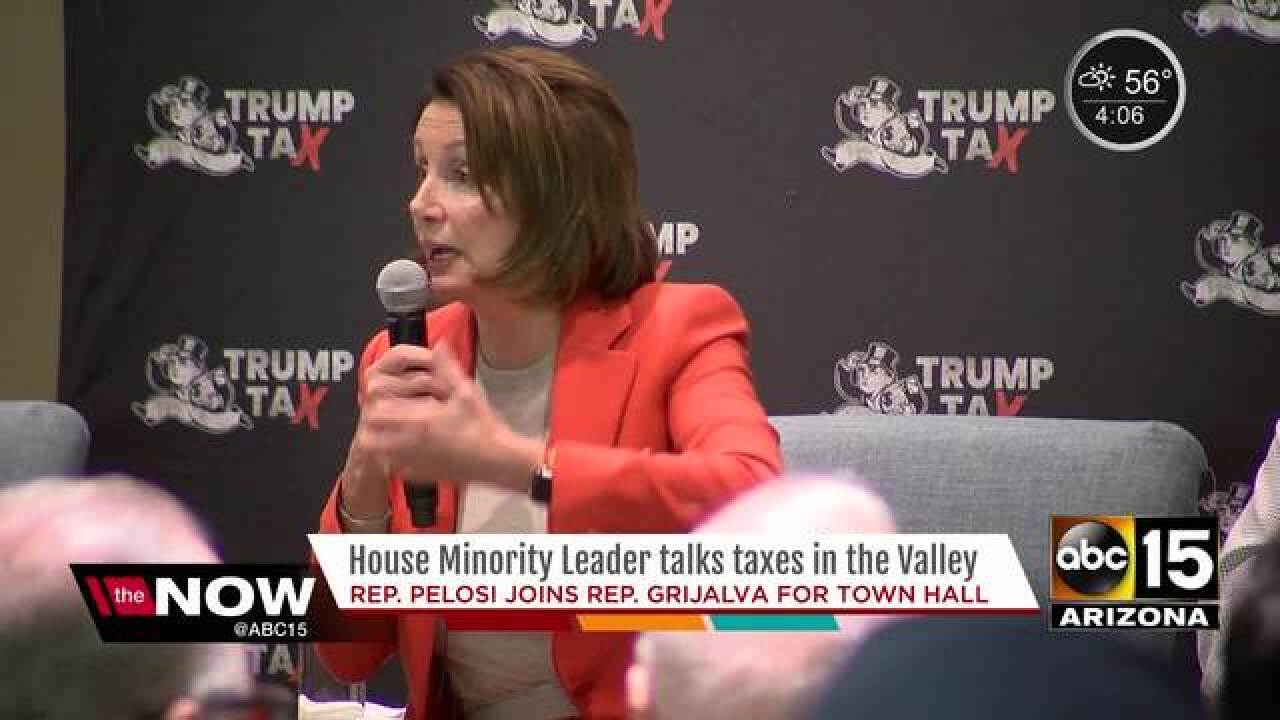 U.S. House Minority Leader Nancy Pelosi told supporters in Phoenix Tuesday that the Republican tax cuts will have dire effects on the middle class in Arizona and across the nation.

The Democratic leader told about 100 people at a town hall-style event that Republican leaders intend to cut social security, Medicaid and Medicare to pay for the $2.2 trillion in cuts enacted in December.

"The national budget is a statement of our national values, of what's important to us as a nation, makes us strong and builds the future," Pelosi said. "They said we're going to have cut Medicare and Medicare, because we've now increased the deficit, the national debt. So, is that a statement of values for us as a country?"

Pelosi's visit is part of a 100-city tour hosted by Democrats to highlight their opposition to tax legislation passed late last year. They say millions of low-income Americans will pay more while the richest 1 percent get huge tax breaks.

Pelosi was joined by other Democrats, including Arizona U.S. Rep. Raul Grijalva, state Rep. Tony Navarette and David Lujan of the Arizona Center for Economic Progress.

Grijalva said Republicans who have long held that government is too large have set up "a self-fulfilling prophecy," by growing the deficit by $2.2 trillion over a decade.

"And because of that now we have to look at, suddenly the realization will come, that we have a deficit created by this tax cut," Grijalva said. "Now we move into the second phase of the self-fulfilling prophecy, which is `let's get back to balancing the budget.' We'll go back to that fiscal hawk discussion that we're supposed to have."

Speaking with reporters after the event, Pelosi said her visit wasn't about Republicans and Democrats.

"This is about the United States of America. And this tax bill will be very damaging to our future," she said. "It robs the future to the tune of trillions of dollars, it refuses to invest in helping people, because it says now we have a debt that they have increased."

The state Republican Party issue a statement saying the legislation positively impacts millions of Americans, including thousands of Arizonans. The Party included a list of companies operating in Arizona that provided bonuses after the tax cuts were enacted.

"The private sector response to this legislation is in addition to the estimated $2,512 in after-tax income Arizona's middle-class families should see back in their paychecks due to tax reform," the GOP statement said.

Pelosi noted that some companies announced layoffs the same day they announced bonuses and didn't give straight pay raises that would providing lasting income for workers, as their tax cut benefits are.

The tour continues to Tucson on Wednesday.