DACA recipients among those arrested during weekend protests in Phoenix 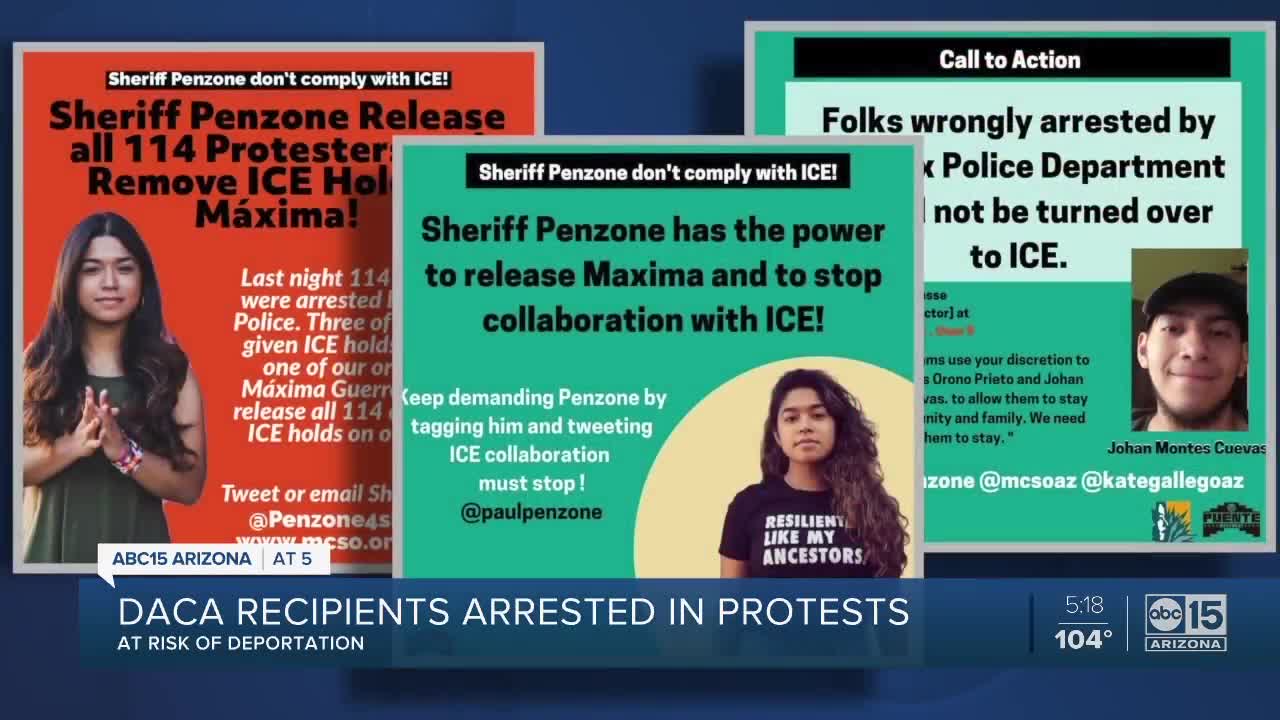 One facing deportations; the other two arrested. PHOENIX — Three DACA recipients were among those arrested over the weekend during George Floyd protests in Phoenix.

According to Puente Human Rights Movement, two Dreamers were released this morning from ICE custody, while another was transfered to a detention center in Florence and released later in the day Monday.

“It’s taking a while to just let everything out and process what’s happening,” said Maxima Guerrero, a DACA recipient arrested on Saturday and transferred to ICE custody overnight.

In a matter of hours, the community organized a social media campaign to free Maxima and the other ‘Dreamers’, Guerrero was released from ICE custody this morning.

“They stopped the vehicle, pulled her out and arrested her,” said Ray Maldonado, Guerrero’s immigration attorney.

Maldonado says Maxima was arrested Saturday night even though she was already leaving in her car from downtown Phoenix.

We sat down with Phoenix Police Chief Jeri Williams today and asked her about officers allegedly pulling people out of cars to make arrests.

“Those cars were used to fortify and give rocks and water bottles, food to those individuals who were there to commit crime and damage, to do dangerous things to our community,” said Williams.

Maldonado says that wasn’t the case for Guerrero, “Maxima was engaging in legal observation at the protest to make sure people’s rights were protected.”

Maldonado believes there was no reason to detain Guerrero, “it’s absolutely disgusting the charges that they’re putting against her. They’re completely false, she didn’t engage in any rioting nor did the vast majority of people that were arrested and in all of the cases the judge found no probable cause for the charge that was levied against them.”

“Someone like Maxima has not had a day in court and she’s under the possibility of being deported, she has an ankle monitor and ICE would be monitoring her constantly,” said Carlos Garcia, City of Phoenix council member for district eight.

Garcia believes this situation could have been prevented, “she should have been signed a release by Phoenix police and she wasn't. She was sent to fourth avenue jail. Penzone had an opportunity to release her, but he handed her over to ICE.”

We have reached out to ICE to confirm the immigration status for the ‘Dreamers’ arrested and will provide that information as soon as it’s available.