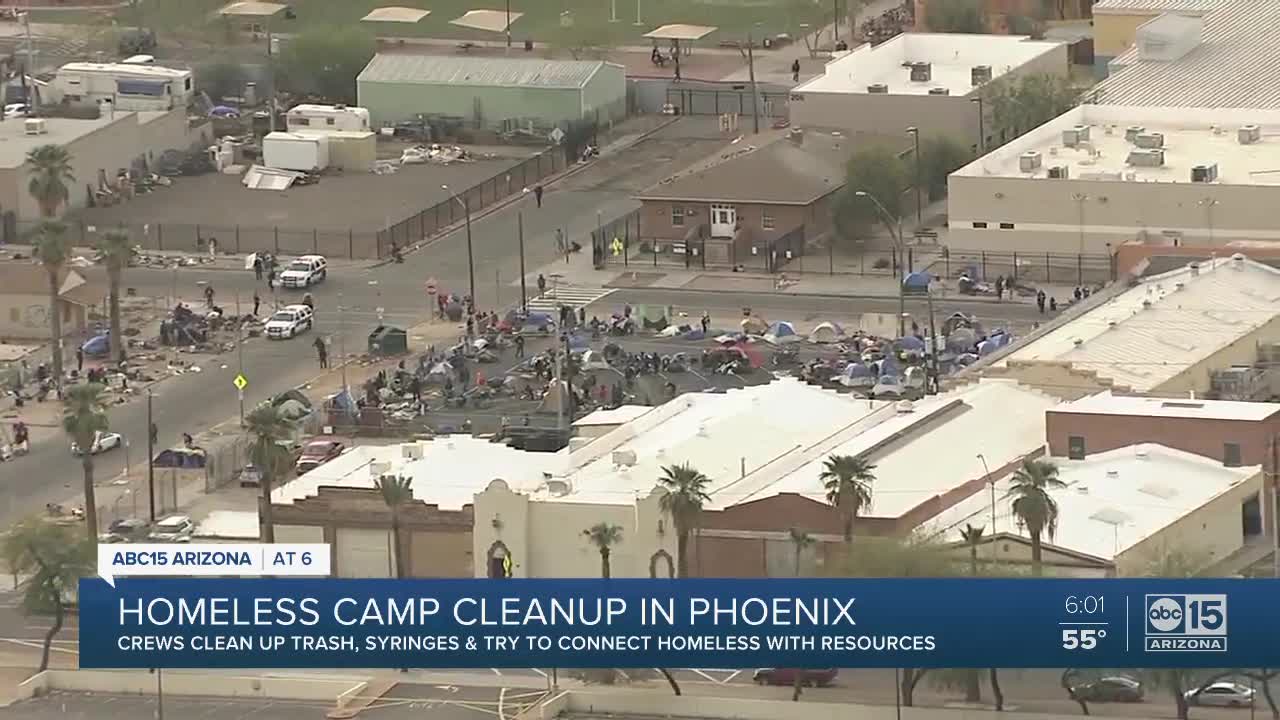 A homeless camp cleanup in Phoenix draws mixed reaction from residents who say there should be more resources available. 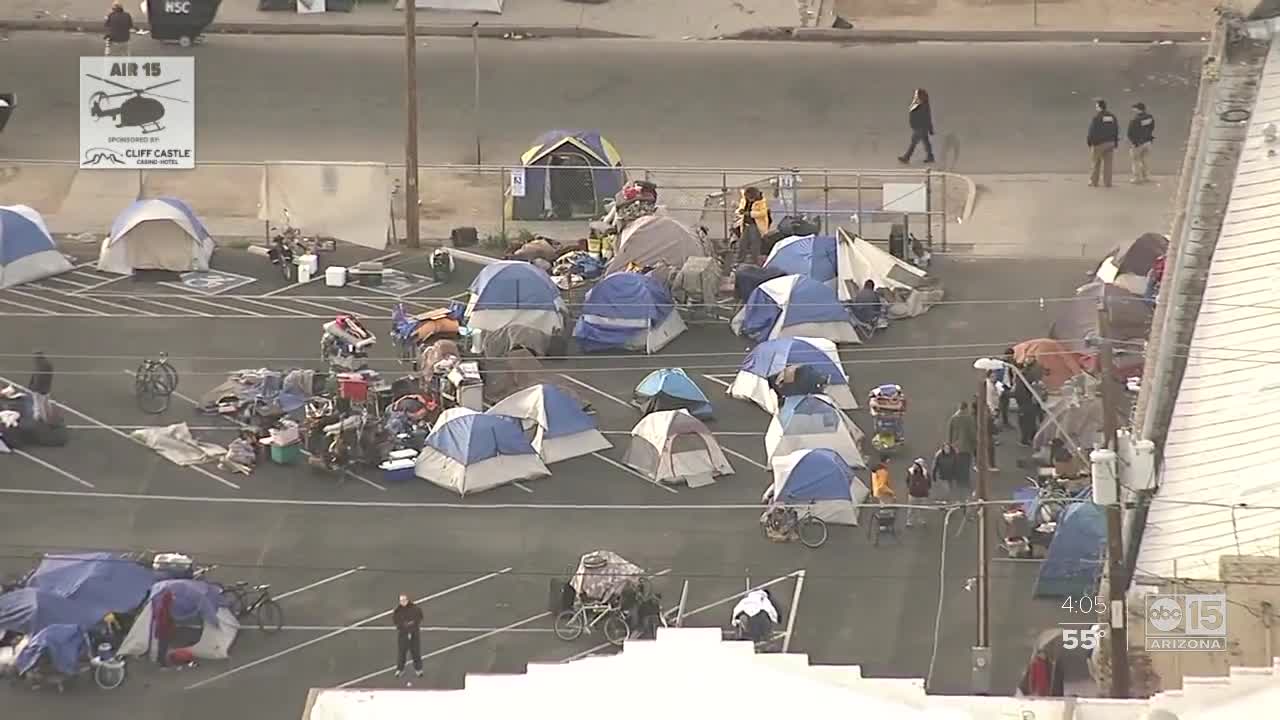 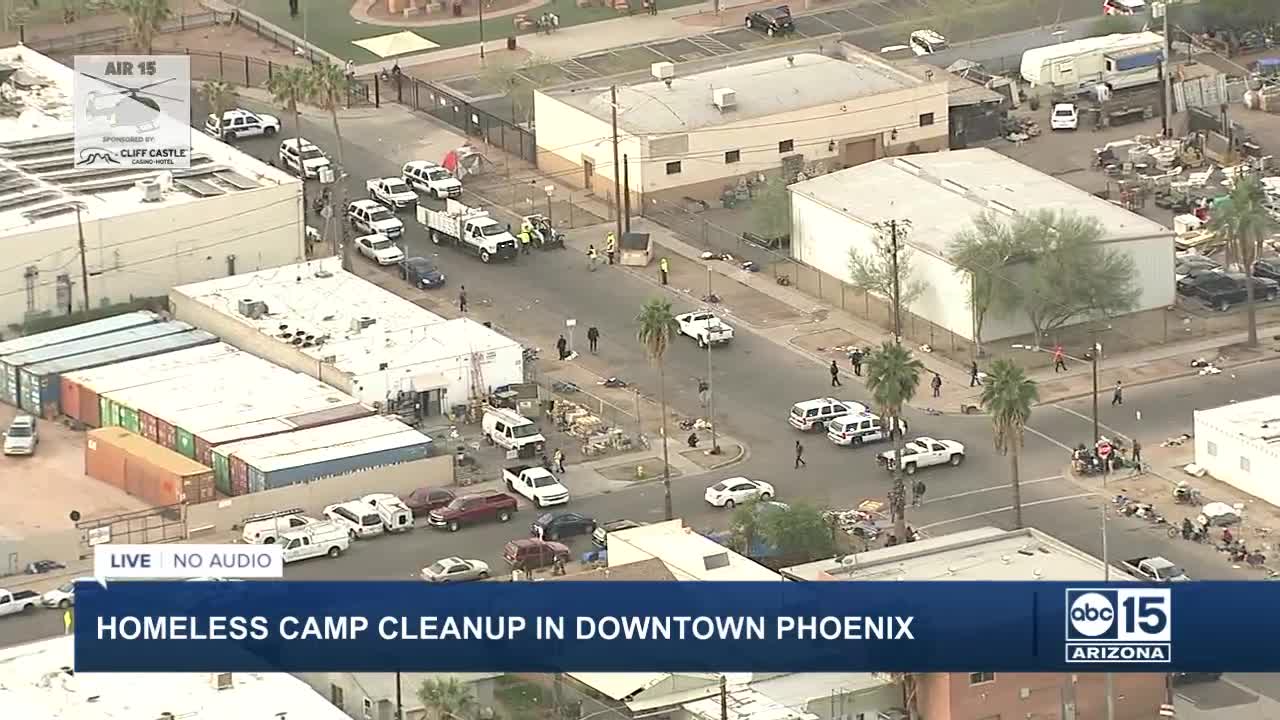 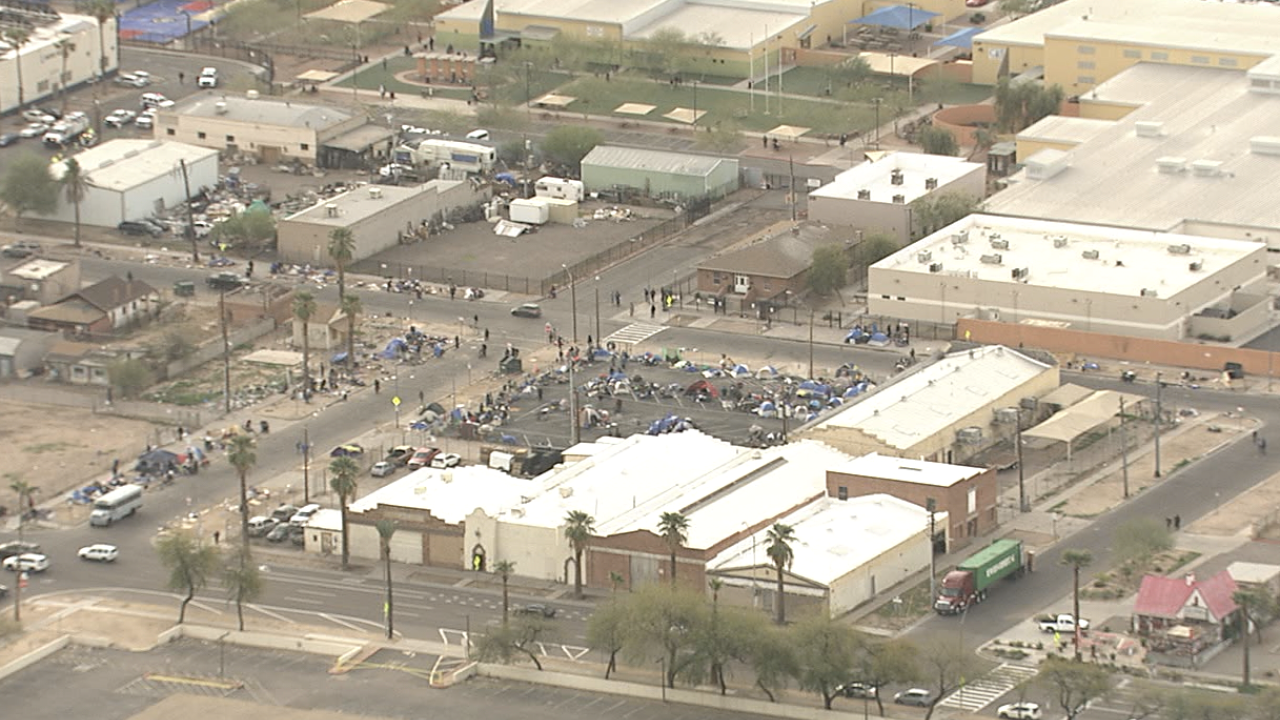 PHOENIX — Crews moved in Wednesday morning to clean up a dense area of homeless camps near downtown Phoenix.

Video from the scene near 9th Avenue and Madison Street showed police officers and other crews working to tidy up areas of tents, tarps and other items along sidewalks and in parking lots.

A spokesperson with the City of Phoenix said Wednesday's clean-up is the beginning of a three-day outreach effort that includes offering services to those in need.

The city also does a weekly cleaning of the area aside from Wednesday's outreach event.

According to the most recent numbers, the number of homeless people living on Valley streets has jumped 200 percent over the last six years.

According to the most recent homeless count done by the Maricopa County Association of Governments, or MAG, about 6,600 people are considered homeless in Maricopa County.

Nearly half are actually living on the streets, not in shelters. There are a lot of reasons why that number is so high, but MAG says one reason is the high price of rent.

"In the last three to four months, we've never seen anything quite like this so the problem has gotten out of control," said Ian Francis, who owns nearby buildings and also runs a business. He addressed the Phoenix City Council last week.

Meanwhile, several members of the homeless population took issue with having to move their items.

"I was upset, I had to get up early in the morning," said Brent Hogue, who is living on the street. "It was freezing cold, you know, it was hard, it was difficult."

The City of Phoenix says the displacement was only for several hours, as crews conducted a larger cleanup than usual, while also providing outreach and connecting those in need with services.

"We are trying not to make anybody feel like they are forced out of here," said Tamyra Spendley, with the City of Phoenix.

The homeless encampment is located outside the Human Services Campus, which offers resources in addition to a nightly shelter, run by Central Arizona Shelter Services (CASS).

While several members of the homeless population say they either don't want to go to the shelter - or aren't allowed for one reason or another - campus officials say there are not enough beds to meet demand.

"We can't shelter everyone so some people have to decide where am I going to go sleep at night?" said Amy Schwabenlender, the executive director of the Human Services Campus. "When they can't be on campus in a shelter bed they're going to be outside."

Schwabenlender says the campus did submit a permit application to the City of Phoenix early last year that would allow for nearly double the number of shelter beds nightly, but the application is still going through the process, is yet be scheduled on the necessary agendas and she is working to address neighborhood concerns, like trash.

The City of Phoenix Planning and Development Department sent the following information as it relates to the permit application:

The subject property falls within the boundary of the Capitol Mall Overlay, established by the city in 1986. The overlay contains additional regulatory provisions for all the land within its boundary. It was specifically enacted by the City Council to address property owner, business owner and residents’ concerns about concentrations of homeless services. It established a more rigorous process because of the potential negative impacts from this type of use.

In addition, the property falls within the Governmental Mall Area which is a special law enacted by the State Legislature to protect the state’s interests about developments as this is on the Capital Mall. This requires the applicant to coordinate and ultimately receive approval from the Arizona Department of Administration.

The applicant in this case received Arizona Department of Administration approval on 6/25/2019.

There are several departments in the city which are part of considering what should be approved and what stipulations should be mandated for this request. Those discussions are a direct response to addressing the public’s concerns about the application. Those departments must consider the impacts to the people served and the community as well as consider how it fits with the city’s General Plan. The application and its stipulations must be finalized before staff makes a recommendation.

Once there is a recommendation, the proposal goes before the Village Planning Committee, then the Planning Commission for a vote and then to City Council for a final vote.