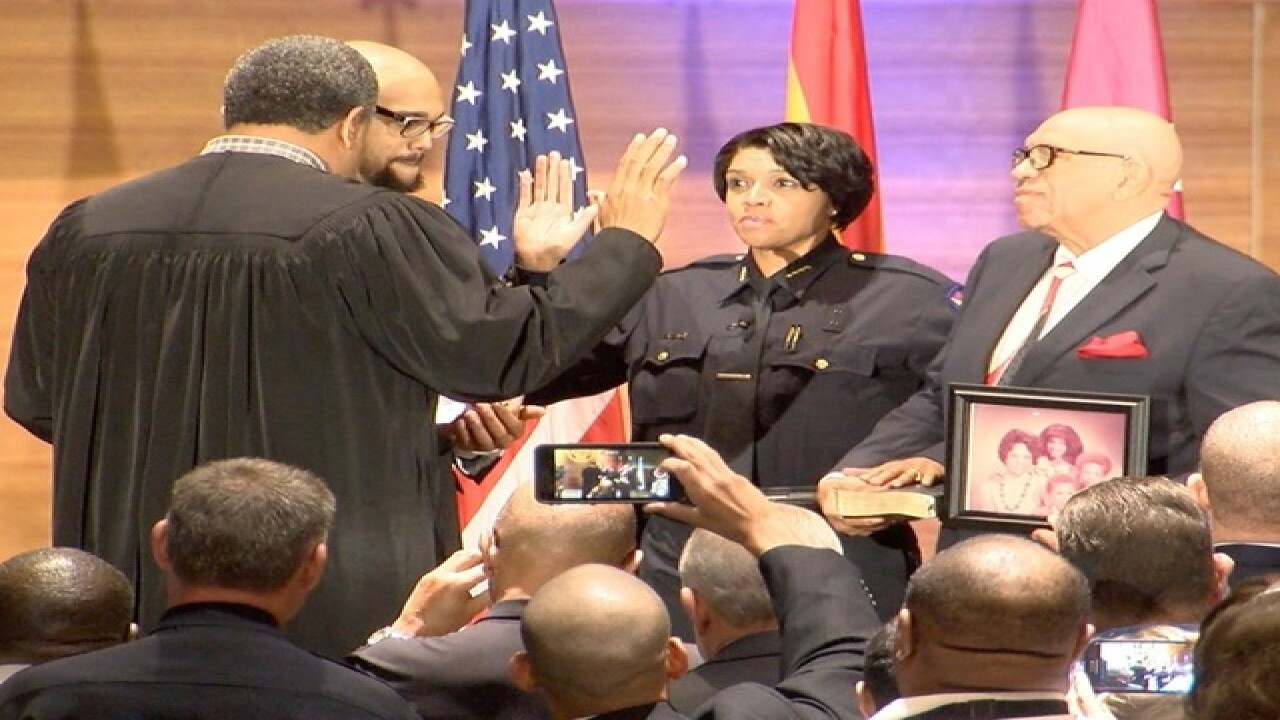 The first woman ever to lead the Phoenix Police Department is officially in place. Chief Jeri Williams took the oath of office in downtown Phoenix on Friday afternoon.

Chief Williams was with Phoenix police for 20 years before leaving to be the Chief in Oxnard, California. She openly admits the Oxnard police had a strained relationship with the community at times and said that experience will help her understand and smooth community relations that have been strained in Phoenix.

“There are many people who really trust and are engaged with the police department. Then there’s that subset that isn’t,” said Chief Williams after her swearing in.

This summer, police shootings across the country prompted protests that took over the streets of downtown Phoenix. Chief Williams said those people with frustrations are the ones she most wants to engage.

“You all have entrusted me with the leadership of your police department and what that means to me is there are many days where I don't sleep because I'm getting out and engaging with the public and community,” said Chief Williams.

Chief Williams also inherits the unsolved Phoenix Serial Street Shooter case. Seven people were murdered over the spring and summer before the serial shooter went silent after his last attack in July. Chief Williams said she has been briefed on the situation and considered it high priority.

She takes the reigns from Chief Joseph Yahner, who was all smiles at a goodbye event held right before Chief Williams was sworn in. It marks the first time in two administrations that the transfer of power has been a celebration.

Chief Yahner took over a department in constant controversy under Chief Daniel Garcia.

Garcia was fired for insubordination in 2014 after holding a bizarre and confrontational news conference that City Manager Ed Zuercher had warned him against. Prior to his ouster, Garcia had a contentious relationship with rank and file officers and the police union held a no-confidence vote in his leadership.

Things were different under Chief Yahner, who has been widely liked during his 30-year career and is respected by his peers.

Not everyone was happy on Friday, however. About 30 protesters tried to crash Chief Yahner’s going away bash. They carried mock caskets and claimed 17 people have died in Phoenix police custody on Chief Yahner’s watch this year--10 of them Latinos.

“[The] police department has said it wants to adopt the no harm solutions at all times but we haven't really seen that. The mental health squad is a complete fail,” said Francisca Porches, with People United for Justice.

The Phoenix Police Department didn’t immediately have statistics available for in-custody deaths in 2016, but said there have been 24 police-involved shootings. Not all of those shootings were deadly and none are being investigated as illegal use of force.