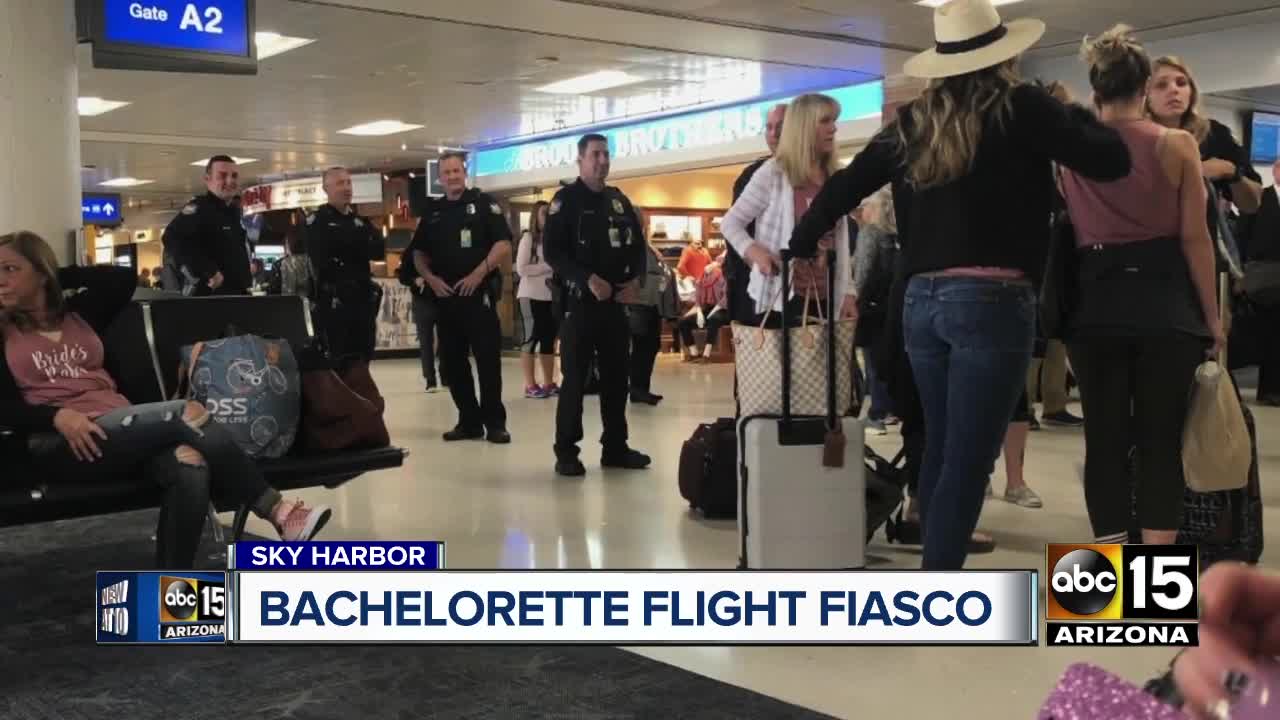 A bachelorette party was derailed at Sky Harbor Airport in Phoenix after a staff member for American Airlines thought one of the party members "looked too drunk."

PHOENIX — A group of 15 women sat by their luggage at baggage claim on Thursday, all sporting pink "Bride's Babes" shirts for what was supposed to be a weekend getaway in Cabo San Lucas.

Instead, they spent their first night at Phoenix Sky Harbor International Airport after American Airlines told the group they couldn't board their connecting flight to Mexico.

Alyssa Zayas is getting married in April. She and some of her closest friends planned their trip a year in advance and say they spent roughly more than $30,000 combined on flights alone.

"I’m trying to compose myself," she said, "I’m pretty frustrated in the sense that there are 15 women that were going to celebrate a pretty monumental thing, and what do we do now?”

The group boarded their first of two flights in Sacramento. Zayas says her mom hadn't flown in more than 20 years and had a few drinks before the flight took off.

Everything was okay until they started landing. Zayas' mom got anxious, started breathing heavily, and said she felt nauseous.

When the group got off the plane, they say a woman approached them, banning Zayas' mom from boarding their connecting flight to Cabo, citing “visible signs of intoxication.”

“Naturally, there was 15 of us that were like well none of us are leaving without her," added Zayas. She said the woman called her mother a flight risk.

The situation went south when the group questioned the manager, who then banned the entire group from boarding, calling them “unruly.”

She called Phoenix police, but the group said neither AA staff or the officers asked how much Zayas' mother drank, or gave her a breathalyzer test before refusing her entry on the connecting flight.

“A passenger was traveling on American Airlines from Sacramento to Cabo San Lucas, Mexico, was denied travel on their connecting flight in Phoenix due to visible intoxication at the gate. FAA regulations prohibit U.S. carriers from boarding an intoxicated passenger. After this decision was made, several other members of their group became irate and posed a safety risk to crew members and other passengers. These passengers were subsequently denied travel on this flight. Our Phoenix team advised the group they will be rebooked on another flight, provided they no longer pose a safety issue for our crew members and passengers.”

The group said they were initially denied refunds, but later, the airline gave them partial refunds.