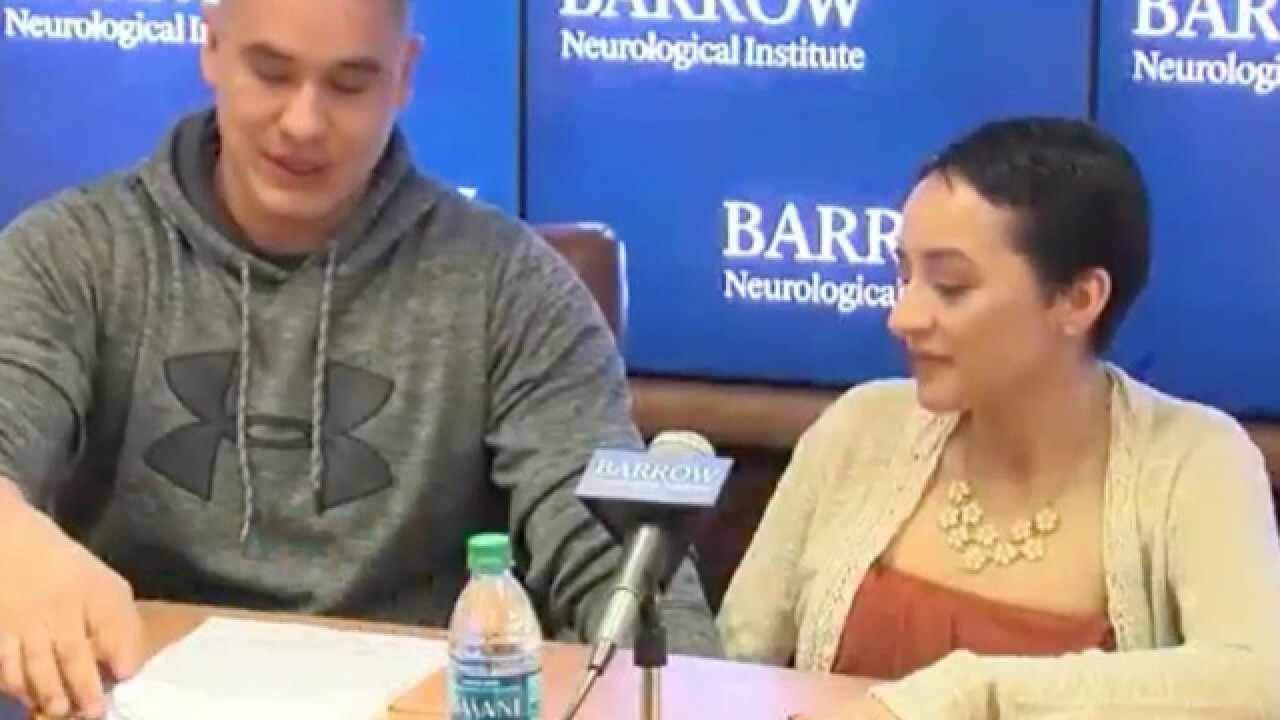 More than three months after she was shot in the head in the deadliest mass shooting in modern U.S. history and put on life support, an Arizona woman is smiling and talking, demonstrating a recovery that doctors at a Phoenix hospital are calling miraculous.

Arriving at a news conference Wednesday in a wheelchair with her right side immobile, she smiled and said hello to reporters as she was lifted onto a seat in front of news cameras.

Declining to take questions, she instead slowly read from her own short, prepared statements.

"On Oct. 1, a part of me changed that night," she said. "Even though I will not be the same Jovanna, I will come back strong."

That night is when the 30-year-old mother and her husband, Frank, a police officer with the Salt River Police in metro Phoenix, were at the outdoor Route 91 Harvest Festival in Las Vegas. They were celebrating his recent return from an Air Force deployment in Afghanistan.

They were cheering for country singer Jason Aldean when gunman Stephen Paddock opened fire on the crowd from his room on the 32nd floor of the Mandalay Bay resort. He killed 58 people and wounded 851 others before killing himself.

A critically wounded Calzadillas was taken to University Medical Center in Las Vegas. Three doctors told her husband there was nothing they could do and she had a "non-survivable injury."

While considering whether to take her off life support, Frank Calzadillas dreamed that his wife came to him.

"She hugged me and kissed me and she said everything's going to be OK. She just walked away" he said.

So Calzadillas' family instead made plans to fly her back to Phoenix for medical care closer to home. She arrived at Barrow on Oct. 19. One of her physicians, Dr. Lindley Bliss, said Calzadillas could not breathe on her own, was on a respirator and that her prognosis was "pretty grim."

The only positive sign, Bliss said, was that Calzadillas "was more alert than we expected."

Dr. Christina Kwasnica, medical director of the institute's neuro-rehabilitation center, said the bullet hit the left side of Calzadillas' brain, the side that processes language.

So a medical team first focused on therapies for Calzadillas that didn't require language comprehension but would at least strengthen areas of her body that still functioned. They also decreased pain medications and sedatives. This led to Calzadillas becoming more responsive.

By the beginning of November, she no longer needed a ventilator. Two weeks later, she could drink from a cup on her own and eat ice cream. She has since been going for short walks with the help of a device called an exoskeleton, a wearable robot designed to help patients with brain injuries walk.

Her speech also began coming back. Her first words? "God damn it," according to Frank Calzadillas. "Her dad told her `Don't say that. You're supposed to be the miracle child."'

Frank Calzadillas said he doesn't blame any of the Las Vegas doctors for their initial prognosis.

"Medical science is what it is," he said.

Now, the couple is looking forward to lounging on the couch and watching movies with their 11-year-old son and 3-year-old daughter. Calzadillas is also happy that she will "get to boss my husband around."

They've also received widespread support from family, friends and the community. The Salt River Police Department started a GoFundMe page in October which has garnered more than $87,000 in donations.

While the couple can laugh together now, Frank Calzadillas knows there's a long road ahead.

"The very first thing she remembers when she woke up was panic because she couldn't talk. We still live those days," he said. "We still have those hard times where it's very emotional. It's still a struggle."

Calzadillas will be doing out-patient therapy now. She is determined to do it for however long it takes to regain her strength and mobility.