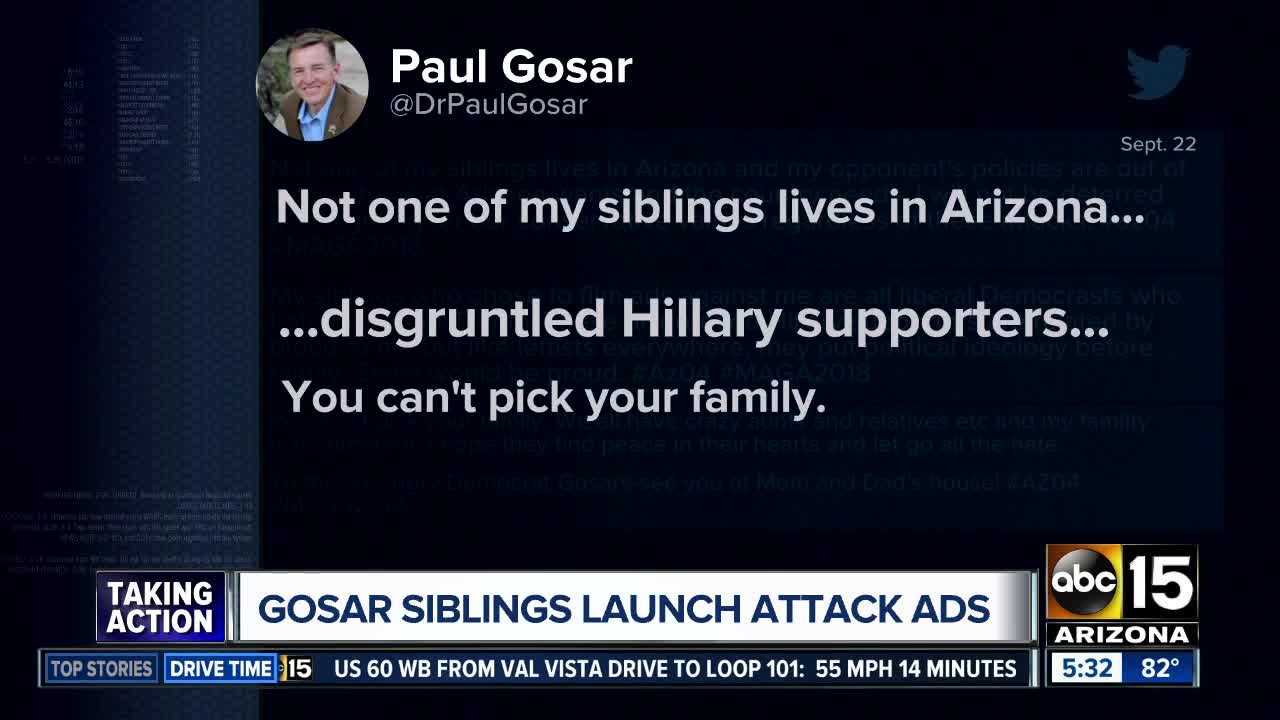 Paul Gosar's siblings appear in a political ad, endorsing the candidate running against their brother. 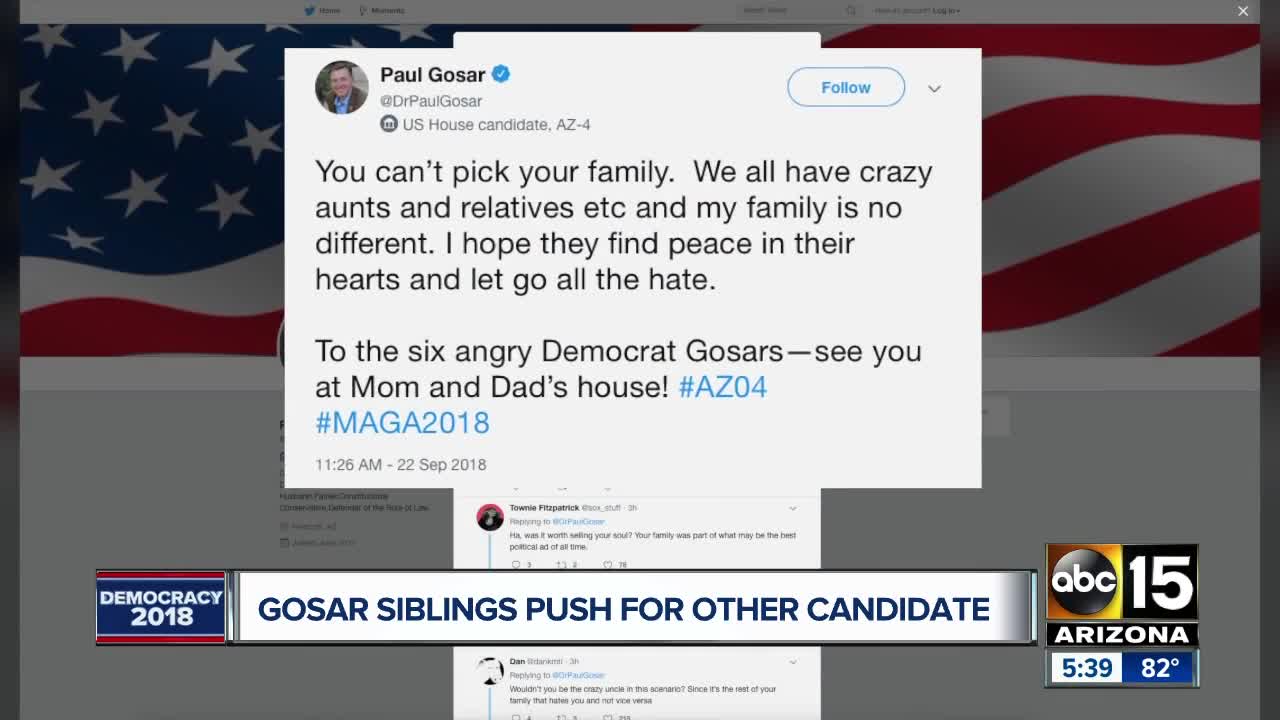 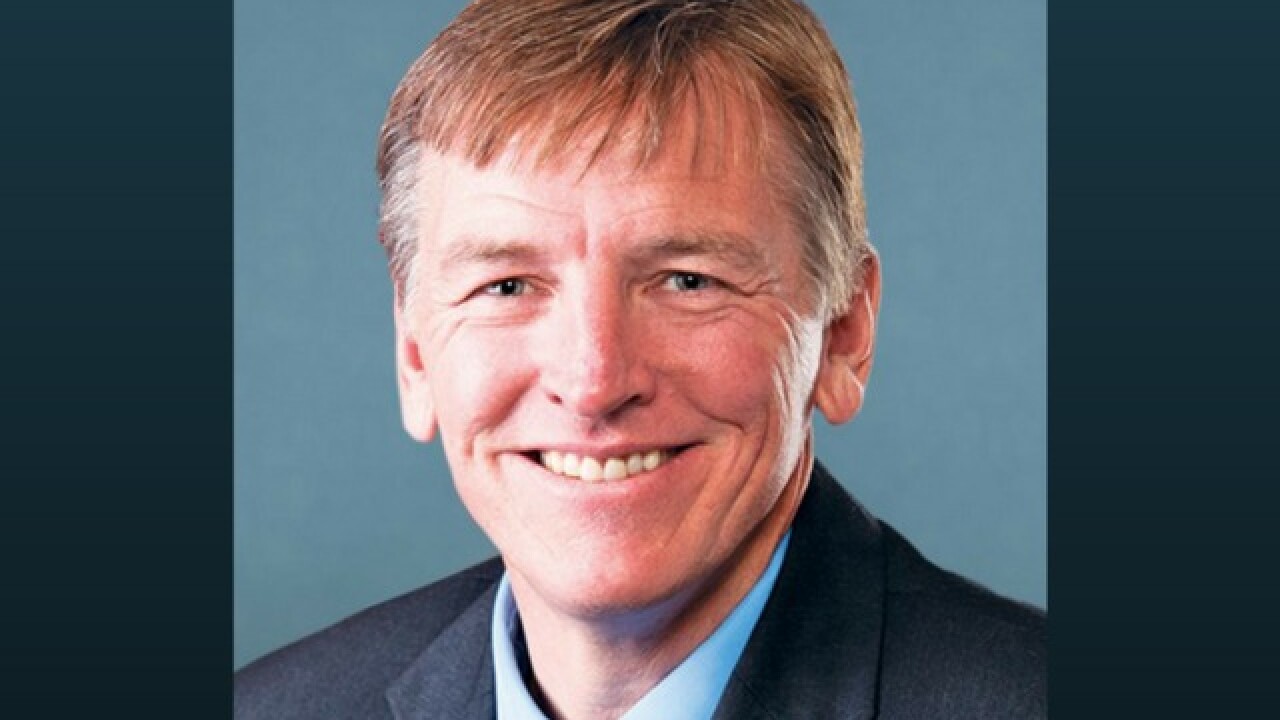 Six siblings of U.S. Rep. Paul Gosar have urged voters to cast their ballots against the Arizona Republican in November in an unusual political ad sponsored by the rival candidate.

The television ad from Democrat David Brill combines video interviews with Gosar-family siblings who ask voters to usher Paul Gosar out of office because he has broken with the family's values. They do not elaborate.

They previously condemned the congressman's false accusation in 2017 that wealthy Democratic donor George Soros was a Nazi collaborator in World War II.

Gosar is a fourth-term congressman for a sprawling district in northwestern and central Arizona.

He fired back at his brothers and sisters in a series of Twitter posts, calling them disgruntled supporters of Hillary Clinton from out of state who put ideology before family.

"My siblings who chose to film ads against me are all liberal Democrats who hate President Trump," Gosar said. "Stalin would be proud."

You can’t pick your family. We all have crazy aunts and relatives etc and my family is no different. I hope they find peace in their hearts and let go all the hate.

To the six angry Democrat Gosars—see you at Mom and Dad’s house! #AZ04 #MAGA2018

In a separate video segment, the siblings urge voters to hold the congressman accountable on health care, employment and environmental issues.

Paul Gosar's comments about Soros came in a television interview with Vice News in which he also suggested a 2017 white supremacist rally in Charlottesville, Virginia, might have been a liberal conspiracy.

In the new ad, the congressman's siblings describe their decision to speak out as saddening, horrible and ultimately a matter of pride for the family from Wyoming.

"I think my brother has traded a lot of the values we had at our kitchen table," says Joan Gosar, an engineer.

Pete Gosar, another sibling who ran unsuccessfully as a candidate for governor of Wyoming in 2014, doesn't appear in the ad, though he has publicly criticized his brother's views in the past.

The rift in the Gosar clan is not the only sibling feud to wend its way into campaigning this year for Congress, as Democrats seek to retake majority control of the House and Senate from Republicans.

In the race to replace House Speaker Paul Ryan of Wisconsin, Democratic congressional candidate Randy Bryce is confronting an ad in which his brother endorses the Republican candidate.

That upset Nancy Bryce, their mother, who has denounced the campaign ad in a letter recently made public.