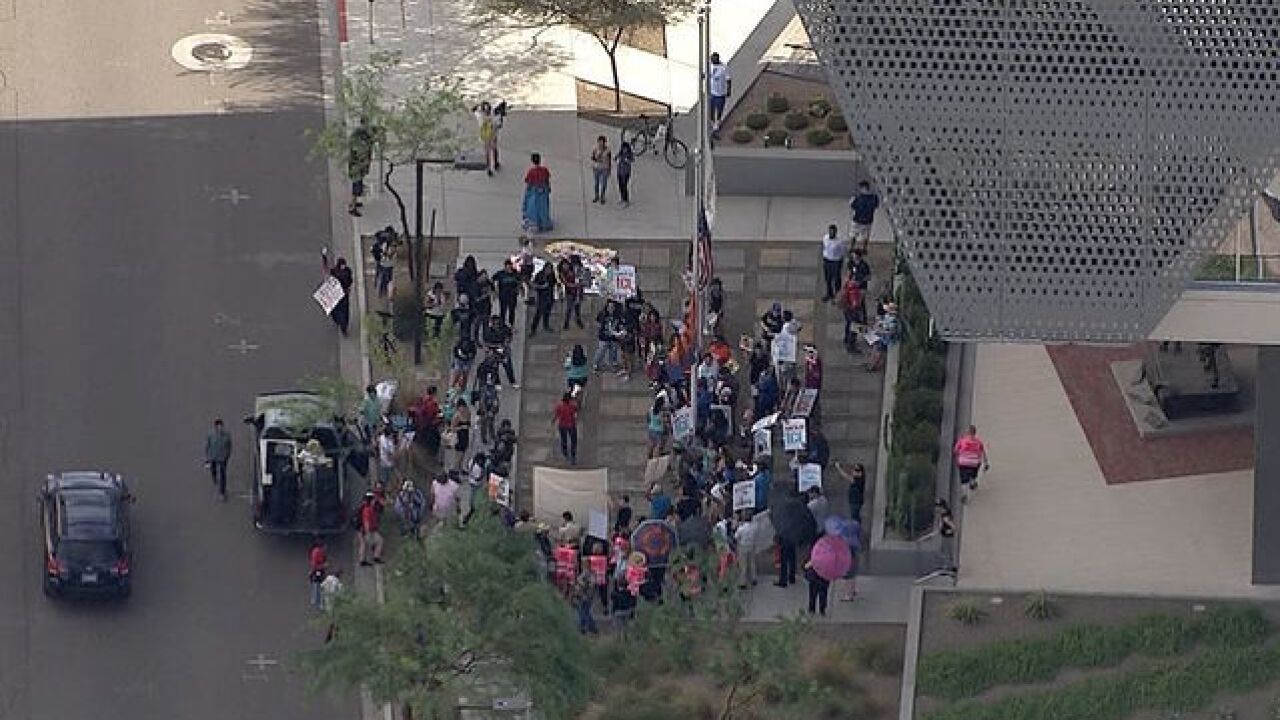 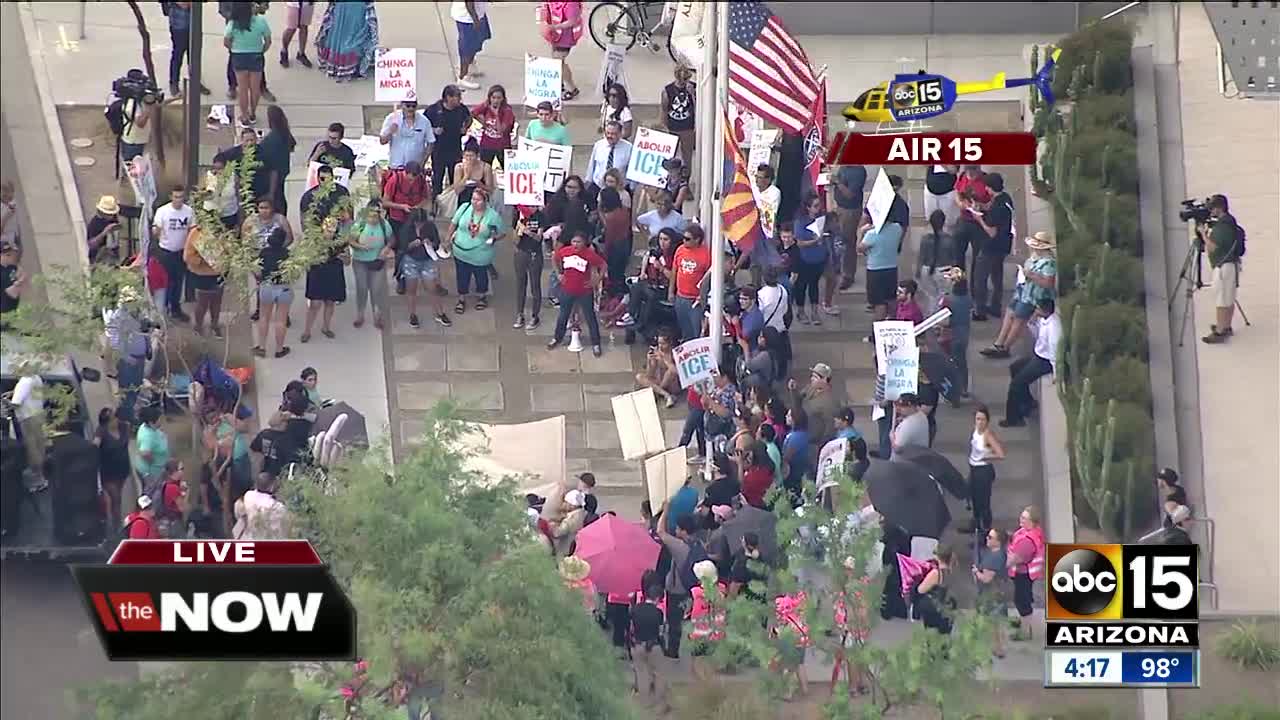 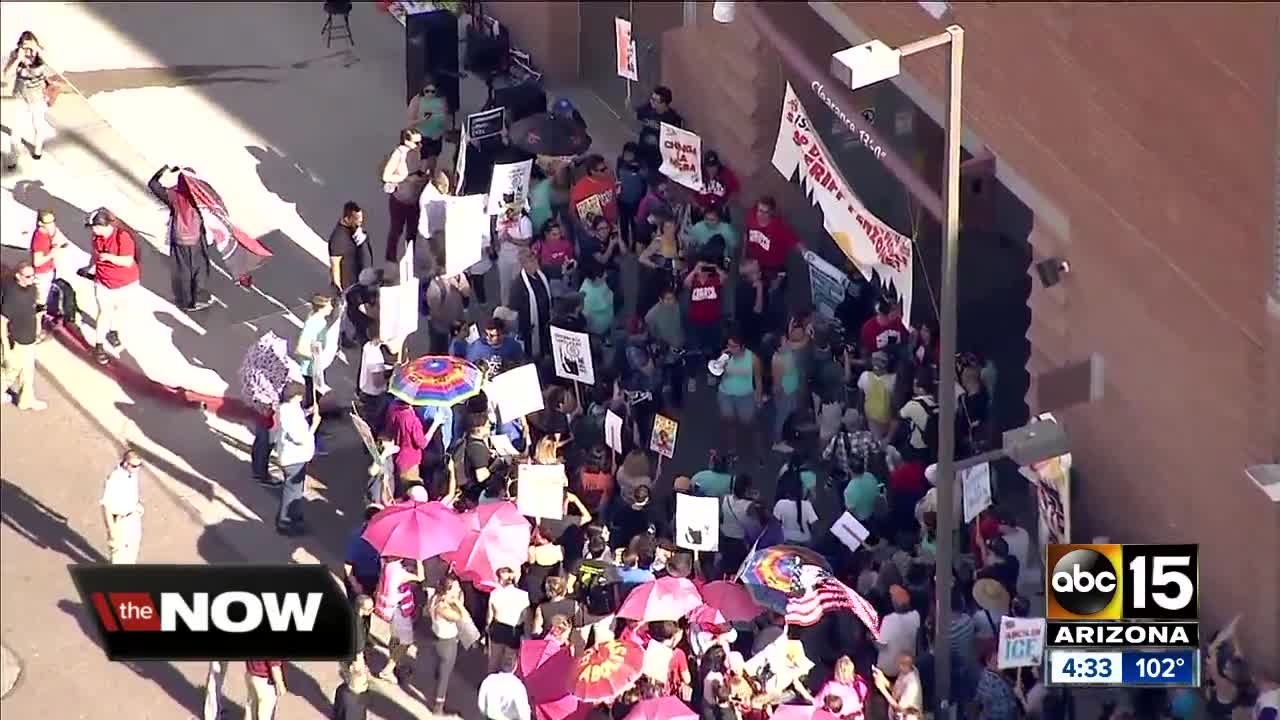 Four activists who chained themselves to each other outside one of the jail entrances were arrested in an act of civil disobedience.

Authorities said the four were sitting down and blocking the entrance and refusing to leave.

"Penzone has the power to stop ICE from entering the jails and he's not doing so. This is to put pressure on Sheriff Penzone that he's still continuing to do harm in our community," said Cynthia Diaz, 23. Diaz's mom was arrested by ICE during a raid at their home in 2011. She was deported to Mexico, but obtained asylum three years later and once again lives in the Phoenix area with her family.

Penzone, a Democrat, handily beat Joe Arpaio during the 2016 election, bringing hope to immigrant advocates that a new era of enforcement was coming in. But many now say Penzone is no different than Arpaio, who was convicted of disobeying a judge's order stop his traffic patrols that targeted immigrants, pardoned by President Donald Trump and is now running for U.S. Senate.

The sheriff doubled down recently on his cooperation with ICE, saying it's "both lawful and necessary in our effort to promote public safety while facilitating the mission and authority of other policing agencies."

Wednesday's protest was part of a national movement known as Abolish ICE, which aims to end the U.S. Immigration and Customs Enforcement agency. ICE was created after 9/11.

"I think communities have been talking about abolishing ICE for a long time and now it's picking up steam and it's really great," said Brenda Perez, of the national group pushing to abolish ICE. "The sofa at my grandmother's house is older than ICE ... we don't have to live in a world with ICE."

The protest was peaceful with a few tense moments as protesters and counter-protesters traded barbs. One man was reprimanded by police for shoving a protester who had gotten close to him with a megaphone.

Penzone says ICE has flagged more than 1,600 jail detainees this year for people arrested for everything from murder to sexual abuse to driving under the influence. The sheriff no longer participates in so-called detainers, or requests by ICE to keep holding someone while they investigate their legal status. But ICE officers are allowed in the jail and can ask anyone about their status.

In a written statement, Penzone said he remains committed to working with ICE and other law enforcement agencies.

"The most effective tactic to avoid these challenges is to be a law-abiding member of our community," he said.

But Ernesto Lopez of Puente Arizona, which organized the protest, said there's no legal reason why Penzone needs to allow ICE in jails.

"I think the one thing we want to accomplish is raise awareness to our people that they're still vulnerable to deportation. The real threat of deportation is the police department and Penzone," Lopez said.

The effort has gained traction and become a favorite topic for election candidates, especially in Arizona

Arizona Gov. Doug Ducey wrote in a USA Today editorial that he didn't support the idea.

"As a border state governor who wakes up every day and goes to sleep every night with the safety and security of Arizona citizens at the top of mind, I want to be clear -- this call to abolish ICE is not only wrong -- it is reckless, and puts the people of my state and others in direct threat."

The Republican Governors Association earlier this summer aired attack ads that linked David Garcia, one of Ducey's Democratic opponents, to the movement. He hasn't used that word choice, but Garcia has said publicly that he supports replacing and reforming the system.