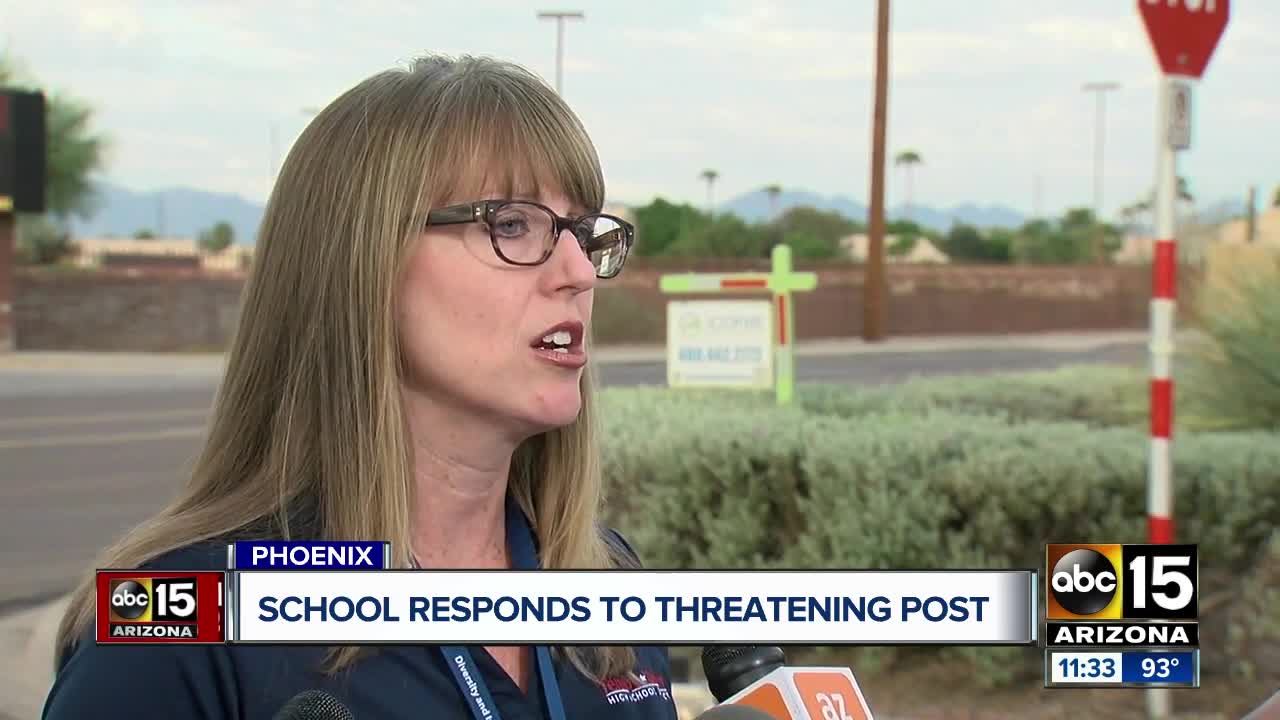 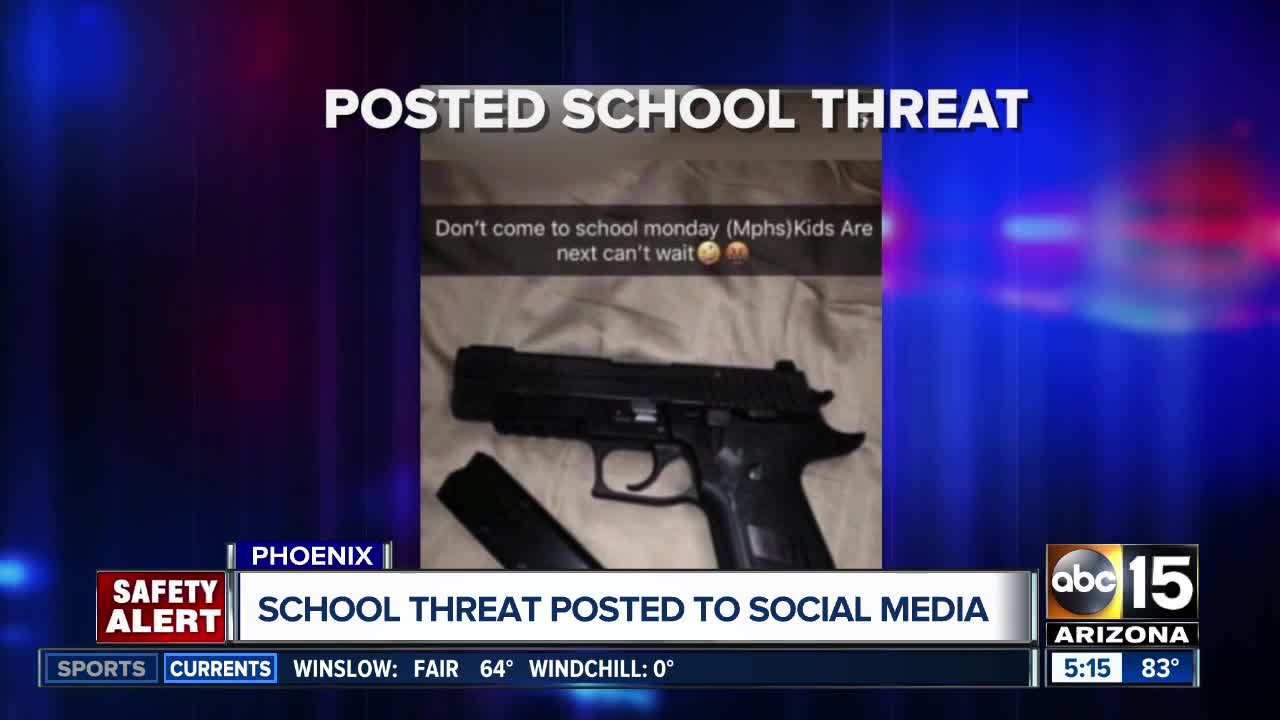 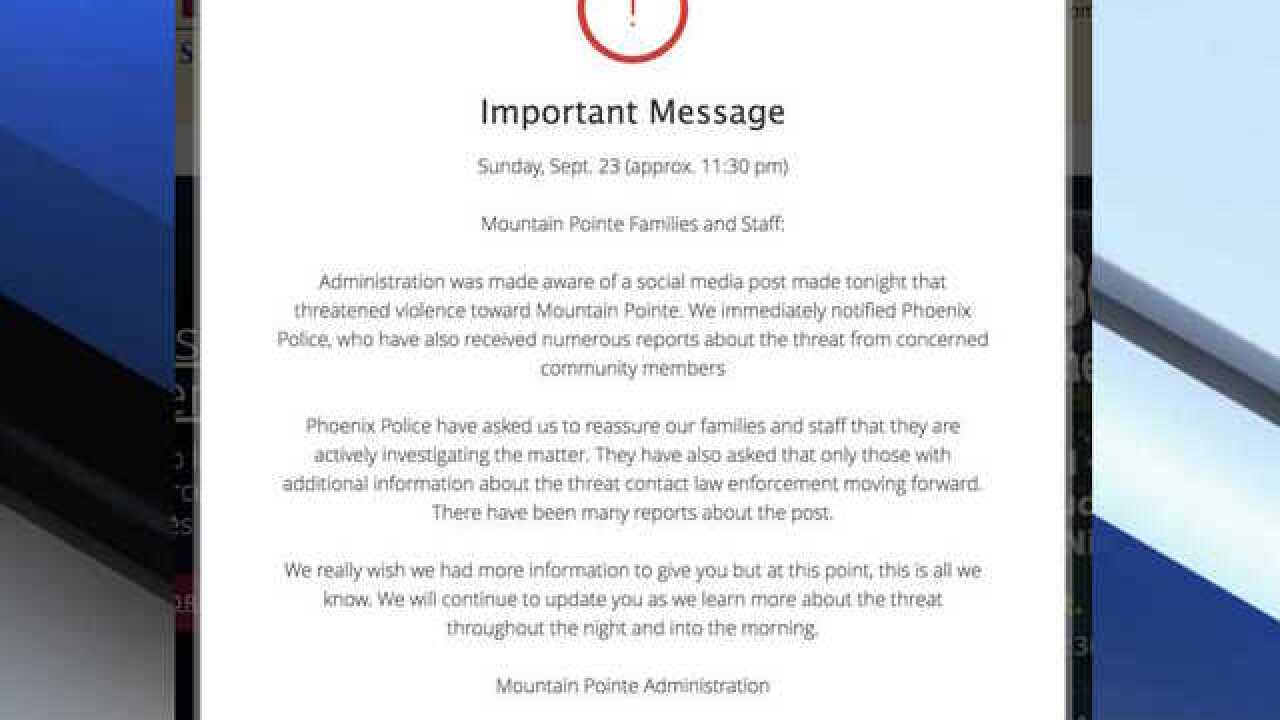 ABC15 received multiple messages from concerned Valley residents showing a screenshot of a post with a weapon, threatening violence toward students at the Ahwatukee-area school on Monday.

According to a message online by the Tempe Union High School District, school officials immediately notified police about the threat. Police have reportedly received many calls about the threat from concerned citizens.

The district also says police are asking only those with additional information about the threat to contact law enforcement, as they are aware and actively investigating. They have yet to determine whether the threat is credible.

They say the threat does not appear to be related to a threat posted last week by another student.

School is still planned to be in session on Monday. Extra officers will be on campus and additional security will be assigned by the district.

The school provided the following information on Monday morning for parents and students:

Late last night, we were made aware of a threat to Mountain Pointe High School that was circulating on social media. We have been in contact with Phoenix Police throughout the day who are investigating the matter. They have informed us they have developed strong investigative leads and are actively following up on them.

Due to the on-going nature of this investigation, we will continue to enforce a non-backpack rule on campus.

It is critical that parents do not speculate about the police investigation, spread rumors about possible suspects, or make assumptions about this matter on social media.

Please know that we are committed to informing parents in an open and transparent manner, but we must respect the investigative process.

We want to applaud Mountain Pointe parents for their efforts to bring awareness to the post. Open communication with your child is critical and we are grateful for the collaborative and proactive efforts made by you to keep us informed on this issue.

Just days ago, two teenagers were charged with felonies after posting threats online toward Mesa schools.

Mesa police said in both incidents officers determined that the teens had no weapons or reasonable means to obtain any weapons. One reportedly posted the threat as a dare, and the other said it was just a joke. Mesa police said they serve as a reminder that "'jokes' of this type will not be tolerated."