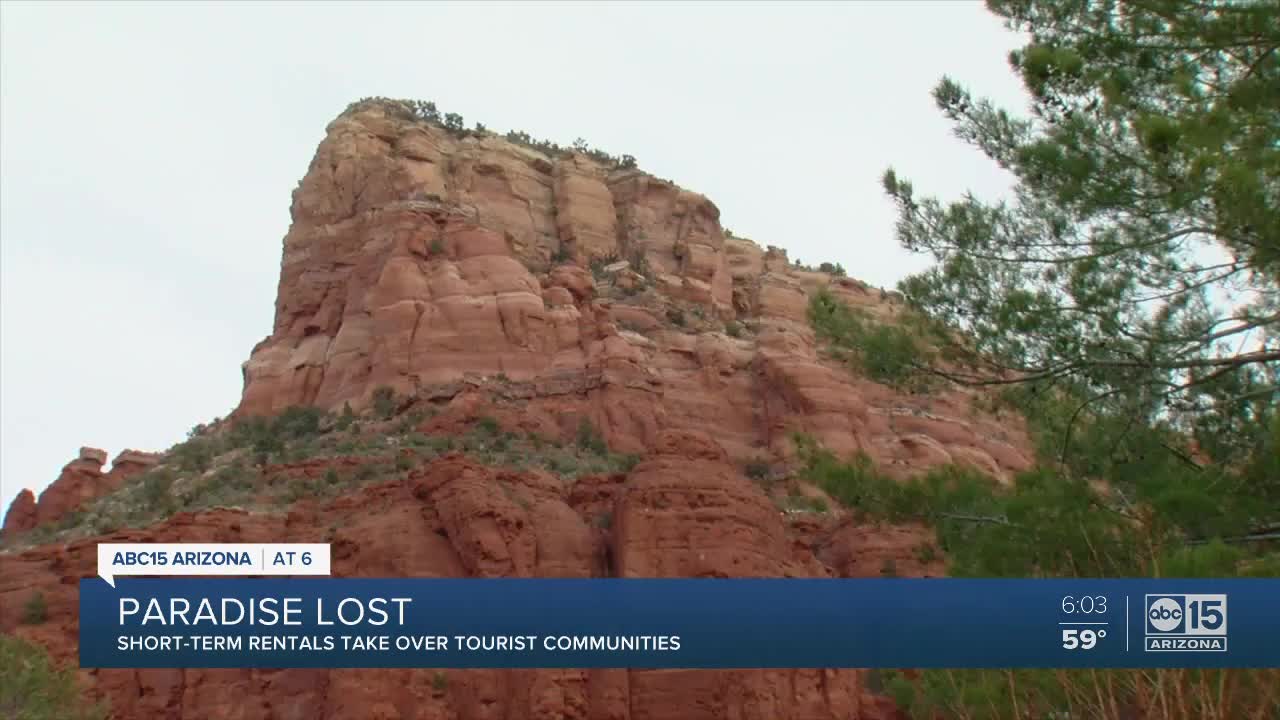 SEDONA, AZ — If there is a heaven on earth, Ernie and Karen Strauch may have found it. Their home lies at the foot of the Chapel of Sedona. They have views of some of Sedona's most photographed beauty, Cathedral Rock, Bell Rock and Courthouse Butte.

"We're no longer an enclosed neighborhood where you know your neighbors," Ernie laments.

For Ernie and Karen and those who call Sedona home, life is changing rapidly. Standing on his back porch, Ernie points out his new reality, "the house right behind me is an Air BnB, and a second one down there," he said. "We're turning our community into a set of mini-hotels scattered about residential communities."

Three years ago the legislature did something it seldom does. It passed a bill with nearly unanimous bipartisan support.

Senate Bill 1350 blocked local governments from regulating short term rentals. The law was seen as a way for homeowners who had a spare bedroom or two to share in the tourism dollars by renting them out as Air BnB's.

While that happened, the bill also allowed investors to buy homes and property in places like Sedona, Jerome, Page and Lake Havasu City and turn them into short term rental properties. Suddenly places like the under-construction "Suite Retreat,” which burned down on New Year’s Eve, started popping up.

Online it advertised as an eight-bedroom, ten-bathroom, with bunk room, family room and kitchen. At 6,500 square feet, it is more than double the size of the homes in the neighborhood where it was being built.

"Something needs to be done," Sedona Mayor Sandy Moriarty said. "Short term rentals should be considered a business."

As it disappears families have moved out. A school has closed, and those who work here have longer commutes from places like Flagstaff, Prescott and Verde Valley.

While many of the people working in Sedona's tourism industry are most affected by the loss of long term rentals, the housing crisis is not confined to service workers.

Sedona-Oak Creek School Superintendent Dennis Dearden and his family are renters, not because they want to be.

"So we went through losing three or four homes along the way," Dearden said. "Every time we put a bid on a house we would be outbid by an investor who wanted to turn that particular home into an Airbnb."

Dearden is also seeing the effects short term rentals are having in the classroom. One teacher lives in an RV, another was forced to move because his apartment is being converted into a short term rental and a third teacher moved to Boston in October because he couldn't afford to live in Sedona anymore.

Enrollment at Sedona High School is down 200 students from just a couple of years ago.

Over the recess, lawmakers listened to testimony and began work on a bill that many hope will fix SB 1350.

Mayor Moriarty says the bill needs to distinguish between mom and pop Air BnBs and investor properties, allowing communities like Sedona to have a say where large scale short term rentals can operate.

State Representative John Kavanaugh, who chaired the hearings says a bill is still being written.