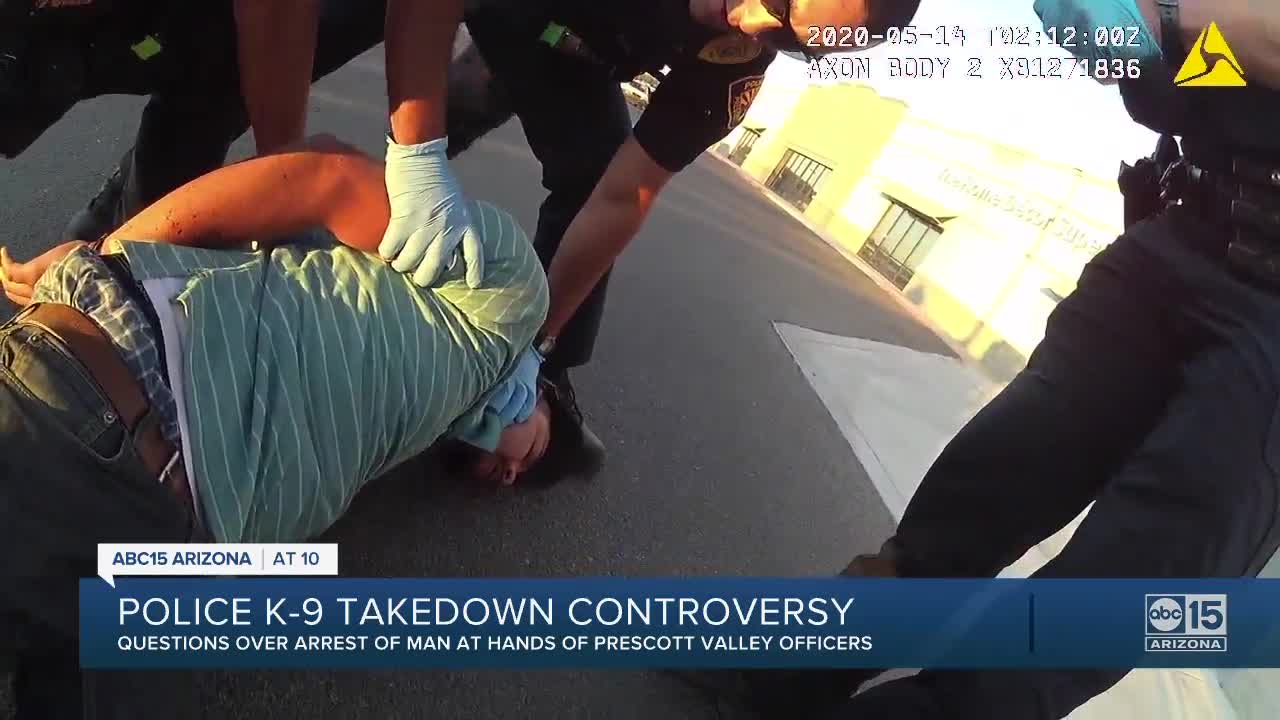 Questions over arrest of man at hands of Prescott Valley officers.

PRESCOTT VALLEY, AZ — The Prescott Valley Police Department is being scrutinized for allowing a K9 to bite an unarmed suspect who was complying with police commands.

The incident in question happened after a high-speed pursuit on May 13.

Prescott Valley PD says the suspect, Alfredo Saldivar, led them on a high-speed chase after he refused to pulled over when he was seen speeding.

The department states Saldivar made a U-turn at one point and drove toward an officer's car.

The officer claimed he was in fear for his life and fired at least seven shots at Saldivar, who was driving a red pick-up truck. Only one bullet struck Saldivar, grazing his head and leaving bullet fragments that remain to this day.

After the shooting, police say Saldivar "struck another vehicle and injured an elderly woman." Her injuries were deemed not life-threatening.

There is no video capturing any of the shots fired because PVPD officers are not equipped with body or dash cameras.

"ON IT'S FACE IT LOOKS HORRIFIC"

The moment a body camera does begin rolling on Saldivar's encounter with law enforcement, he is lying prone in a shopping mall parking lot. For more than a minute, the 28-year-old does exactly what officers tell him to do.

"The suspect appears to be very compliant. By all accounts, he’s following every single verbal command that is being issued to him," said Dr. Michael White, an ASU Criminology professor and police use-of-force expert.

Saldivar goes to his knees, puts his hands up, lifts his shirt, and spins around, all while multiple guns are pointed at him.

After a minute of showing the officers he is compliant and unarmed, one officer yells, "Here's what I want you to do - stand up. Stand up!"

As the officer shouts 'stand up' a second time, over the loud sirens and barking dogs, Saldivar begins to stand-up. At the same moment, a K-9 handler shouts a Dutch phrase at the dog and the Belgian Malinois bee lines towards Saldivar and begins biting him.

The suspect, who his attorney argues is the victim at this point, begins screaming in pain and begging officers to "Please stop the dog!"

The officer who just told him to stand seconds earlier starts yelling "Roll on your belly! Do it now!"

"The suspect, despite the fact that he has been bitten, is still trying to be compliant with his commands," notes Dr. White.

"The release of the dog, and the way the dog bit him, and the way he was screaming - I just found that to be very troubling," said Bami Adelayo, Saldivar's criminal defense attorney.

Eventually, the Belgian Malinois is pulled off and no weapons are found on the 28-year-old. As he's being handcuffed, Saldivar asks, "Why did you let the dog get me? I was already down."

"The dog is released based on the handler’s perception...what he perceived to be a threat at that time," said Sgt Jason Kaufman, a detective and spokesperson with the department.

The justification and rationale from PVPD has changed.

In their initial press release, the department claimed: Saldivar "abandoned the vehicle and fled on foot...A Prescott Valley Police K-9 was deployed and located and subdued the suspect."

The video clearly shows that officers had located and surrounded Saldivar, and the suspect was submissive.

"He did everything they told him to do, and still the dog bite happened," said Adelayo.

The brother-in-law of Saldivar recently posted the body camera footage to Youtube and quickly garnered more than 20,000 views in a matter of days.

The bad publicity led Prescott Valley PD, more than three months later, to issue a new statement they say was "in response to incomplete information."

In the news release dated September 10, they write:

"As officers confronted Saldivar and gave the him numerous verbal commands to surrender, it initially appeared he was complying, then hesitated. Saldivar’s hesitation and the observations made by police led officers to believe that he was going to flee from law enforcement again, which resulted in a Prescott Valley Police K-9 being deployed."

When asked in what way he saw Saldivar 'hesitate,' Sgt. Kaufman replied, "I’m not going to Monday morning quarterback the video."

He also said officers believed Saldivar could have been armed and ready to take off running, despite the video showing Saldivar lifting his shirt, spinning, and making no movements indicating an intent to flee.

"I didn’t see any hesitation that was concerning. Quite honestly, I was shocked to see the dog released," said Dr. White.

"I watch the video multiple times. And I did not see any hesitation. On the contrary, he obeyed their commands," said Adelayo. "I just think the officers did not follow protocol."

A review of the department's K9 apprehension guidelines indicates the handler may have released the dog, intentionally or unintentionally, without meeting the necessary requirements.

The suspect must:
1. 'Pose an imminent threat of violence or serious harm...'
2. 'Be physically resisting arrest or threatening to resist...and the canine reasonably appears necessary to overcome such resistance.'
3. 'Believed to be concealed in an area' where entry would be dangerous for officers

A factor that K9 handlers are supposed to consider in 'preparation for deployment' is the "potential for the suspect to escape or flee if the canine is not utilized."

There's also the section that outlines 'warnings and announcements.'

That K9 policy calls for a "clearly audible warning announcing that a canine will be used if the suspect does not surrender..."

"I didn’t hear a single warning," said Dr. White. "But really, the warning was not even necessary because the suspect wasn’t resisting in the first place."

Alfredo was taken to a hospital.

"He was told he will have permanent nerve damage," said Adelayo.

"IT'S GOING TO BE REVIEWED"

The Prescott Valley Police Department says, since the DPS criminal investigation into the shots fired just wrapped up, they can now begin their internal investigation and administrative review of the shooting and K9 deployment, to see if any policies were violated.

"The use of force is going to be dissected," said Sgt. Kaufman. "It’s going to be reviewed and reviewed to see if the officer operated within policy."

As for Saldivar, he was booked into the Yavapai County Detention Facility located in Camp Verde, Arizona on charges of endangerment, aggravated assault upon law enforcement, criminal damage, unlawful flight, leaving the scene of an accident, and resisting arrest - all felony charges.

His lawyer said he initially fled from police because he is an undocumented immigrant, with a deportation order tied to a 2014 DUI arrest.