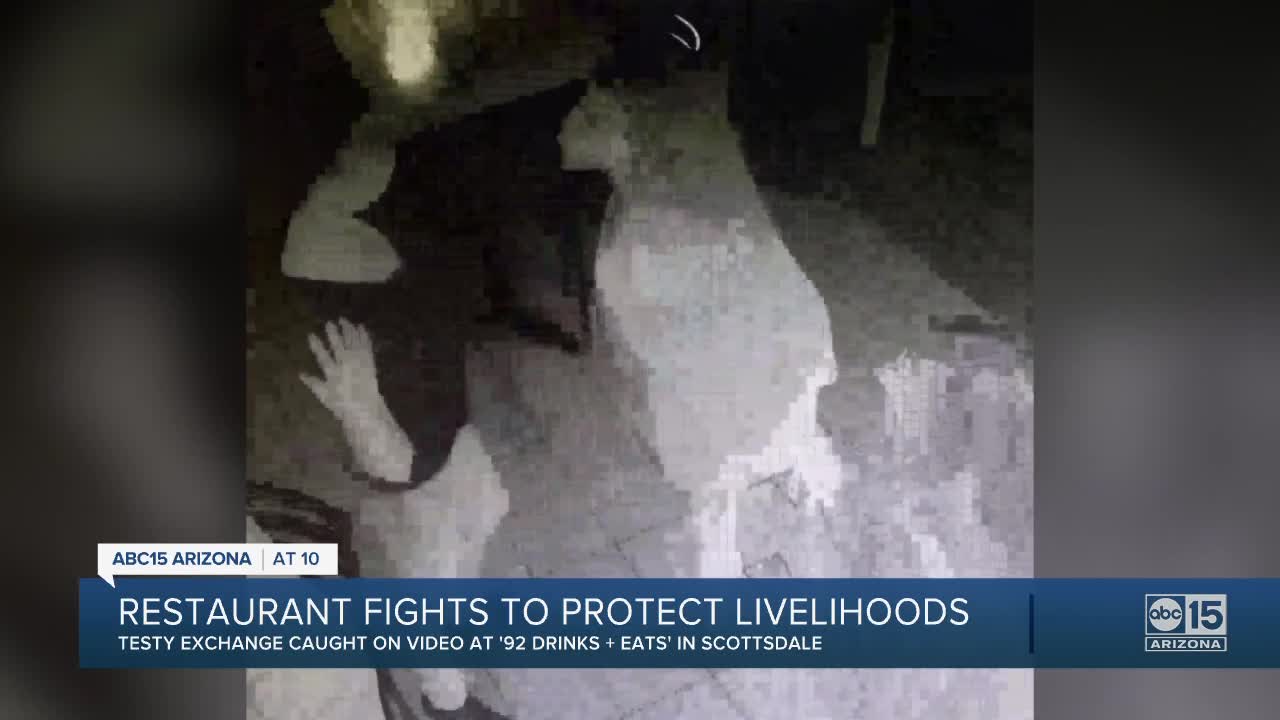 Testy exchange caught on video at '92 Drinks and Eats' in Scottsdale.

SCOTTSDALE, AZ — 92 Drinks + Eats, formerly known as 92nd Street Cafe, was known for karaoke, dancing and flowing drinks on most nights. But now, things are different due to COVID-19 and owner Nicole Dinkel is working hard to keep her doors open while keeping customers happy.

"This industry has been affected very hard," said Dinkel. "We're out here just trying to do the best we can. We're a small business, I run this with my father day to day."

Dinkel said she and her father, Ed, have been forced to shut down three times over the past few months.

The first time was in March, when Governor Doug Ducey issued a Stay-At-Home order for Arizona. The second time was after several of their employees tested positive for COVID-19, and a third time after trying to re-configure the usually busy bar to offer a safer dine-in experience.

"The signage on the door over here "mask up," it says 'avoid the humans keep, your six-foot distance,"' said Dinkel. "We want everyone to understand that it's not us making these rules, we just have to enforce them. It's the only way we can stay open."

Dinkel employs a handful of families, including mother and son duos, as bartenders and servers.

"I have several families who depend on me here, not just my livelihood, but theirs," she added. "If you have customers coming in here not wanting to abide by the rules, it's not worth losing my business or getting in trouble for."

Dinkel had to stand her ground last weekend when a group of women went in for dinner and drinks and caused a scene.

"They were dancing, I had to tell them 'ladies, I'm so sorry I can't have you standing within 6-feet with Ducey's new rules. Can you please take a seat?' They would say OK, and then again in a few minutes, they would still stand up," added Dinkel. "So at the end, I said ladies listen I need to either have you take a seat or need to have you exit with a mask. They just weren't listening."

Surveillance video from 92 Drinks + Eats shows one of the four women stand up from the table, without a mask, and blow in Dinkel's face.

"In that moment, I was shocked," said Dinkel. "I told her to get out of my establishment immediately with all of her friends and I walked them over to the exit."

Dinkel then started recording the group as some women started yelling. She says several of her employees joined her outside as the confrontation continued. Then says the same woman took things to another level.

"She actually reaches across my bartender and snatches my mask off of my face, throws it to the ground, scratches my face."

Dinkel contacted Scottsdale police, who then contacted the group of women that night and issued no trespassing orders.

On Friday, ABC15 confirmed the Scottsdale Police Department filed assault charges against one woman. No arrests have been made. Instead, the charges are being sent to prosecutors with a notice for the woman to appear in court.

"There's a global pandemic going on right now," said Dinkel. "For someone to be able to think that they can do that to another person is shocking... I would hope that they feel really embarrassed and ashamed at their behavior."