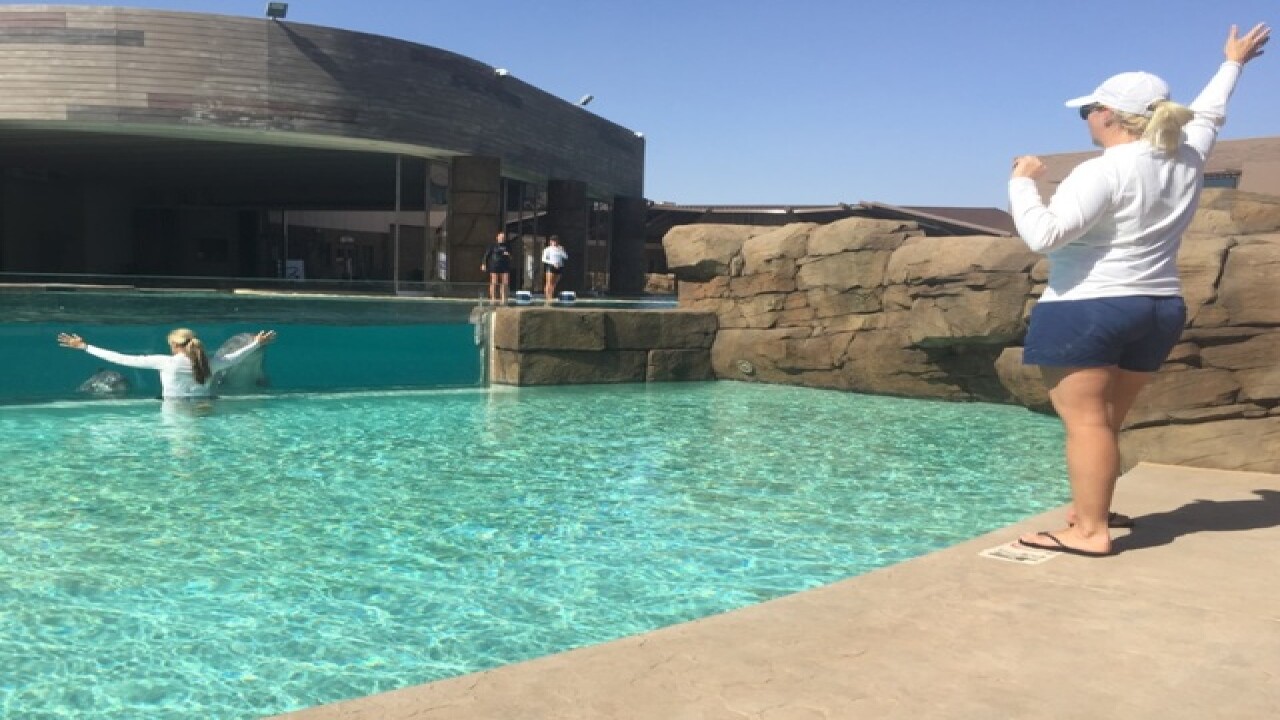 An exhibit opening Saturday in Arizona lets people swim and play with dolphins in pools on the edge of a dirt and cactus landscape near a freeway, angering animal rights activists who believe marine mammal parks should be a thing of the past.
Dolphinaris Arizona is believed to be the first newly constructed dolphin facility in the U.S. in a decade, and it comes at a time when marine parks have been making significant changes to scale back exhibits.
Related: 11 things to know about Dolphinaris, animal safety and experiences
Situated in the Phoenix suburb of Scottsdale, Dolphinaris houses five bottlenose dolphins that were all born in captivity. They will be part of dolphin experiences that let people kiss the dolphins or do handshakes with their fins. The attraction also offers a deluxe swim experience in which people can help trainers for more than three-hour sessions. The costs range from $59 to $399.
The Dolphinaris staff includes nine trainers, a full-time marine mammal veterinarian and water quality experts. There are no plans to breed dolphins at the facility.
VIDEO: Training exercise at Dolphinaris Arizona
Trainers last week did a dry run with a few dozen people of all ages. Some got in the shallow areas. Others just stood at the edge of the dolphin pool as the animals flipped or retrieved a ball. Almost all oohed, aahed and giggled.
Visitors at a neighboring aquarium, which is a separate company, have been stopping by to get a sneak peek of the dolphins. Some settled for taking a selfie in the ticketing area with the 10-feet deep pool in the background.
"We're all on the same side," said trainer Justine Dingee. "We want the same thing -- the animals to be safe, healthy and happy."
Judging by protests on and off social media, there are others who disagree. People for the Ethical Treatment of Animals and Dolphin Free Arizona, a grassroots organization, will hold joint demonstrations outside on opening day. Dolphin Free Arizona spokeswoman Danielle Riley said they expect 100 people. Both groups argue placing dolphins not just in the desert, but in confined pools, is tantamount to animal cruelty.
They protested in July, holding signs with messages such as "Thanks but no tanks" and "Keep AZ Dolphin Free." They also brought in a vehicle topped with a prop killer whale tethered inside a cage.
Lori Marino, who has studied the behavioral biology of marine mammals for 25 years, said the desert environment was a "poetic irony."
"To me, it's no worse or no better than any other place," said Marino, who was featured in the 2013 documentary "Blackfish," which was highly critical of SeaWorld parks. "That being said, there are some things about Arizona weather that are particularly bad. It's very hot. It's very dry. The animals are not going to have any breeze."
Dr. Grey Stafford, general manager of Dolphinaris Arizona, called arguments about the Arizona heat misleading. The pool water at Dolphinaris will stay between 75 and 80 degrees at all times, he said. So, the dolphins will be comfortable "even on the warmest day."
The dolphins go back and forth between the various pool areas through entry gates. The entire habitat uses approximately 1 million gallons of purified seawater that is filtered several times a day and constantly monitored. When a summer monsoon dust storm comes, acrylic glass walls along the indoor pool will interlock and seal the area off.
"Blackfish" is largely credited with changing the conversation about the use of marine mammals for entertainment. SeaWorld faced ensuing backlash. Entertainers severed ties. Attendance fell. Last March, the company made the surprise announcement that it would stop breeding killer whales and making them do water tricks.
Could dolphin programs be the next to downgrade?
The National Aquarium in Baltimore announced in June that it was moving its eight dolphins out of tanks and into an ocean enclosure by 2020. It was an unprecedented move for the marine mammal industry.
There are at least 23 facilities in the U.S. where dolphins are on public display, according to the Alliance of Marine Mammal Parks and Aquariums. A majority are in Florida, Hawaii and California.
Stafford thinks there is still an appetite "based upon the 200 million or more Americans who visit zoos and aquariums every year."
"These are valuable experiences for families to learn, to be educated, to be inspired and yes, to have a little bit of fun learning about amazing animals including bottlenose dolphins," Stafford said. "Much of the empathy that people have today for species like orcas and bottlenose dolphins comes precisely from a visit to a local zoo or aquarium."
Dr. Naomi Rose, a marine mammal scientist with the Animal Welfare Institute, said about 10 similar exhibits have closed in the last 20 years. But those were mostly temporary summer shows or roadside facilities that were becoming rundown. She said no new such facilities have opened in the last decade.
"The data say millennials in particular aren't terribly interested in this anymore. The public in general is starting to turn away from this," Rose said. "In the face of that public trend, Dolphinaris opens a new facility."
Copyright 2016 The Associated Press. All rights reserved. This material may not be published, broadcast, rewritten or redistributed.