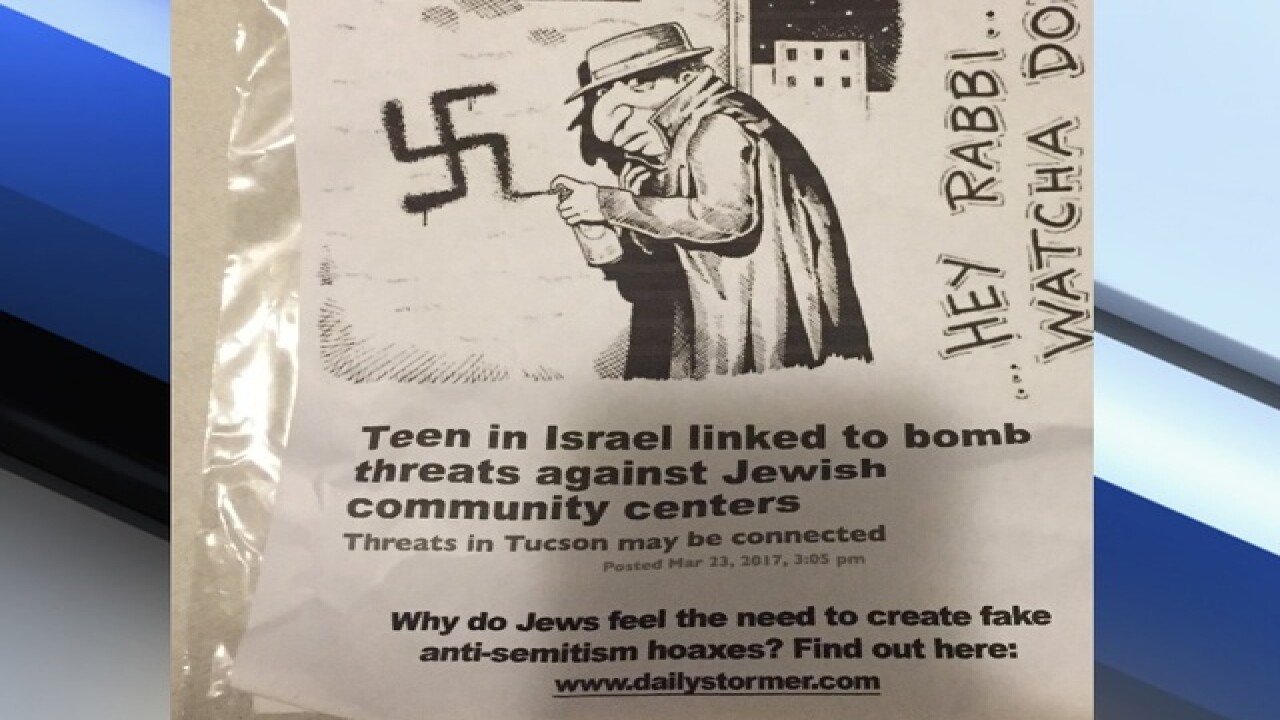 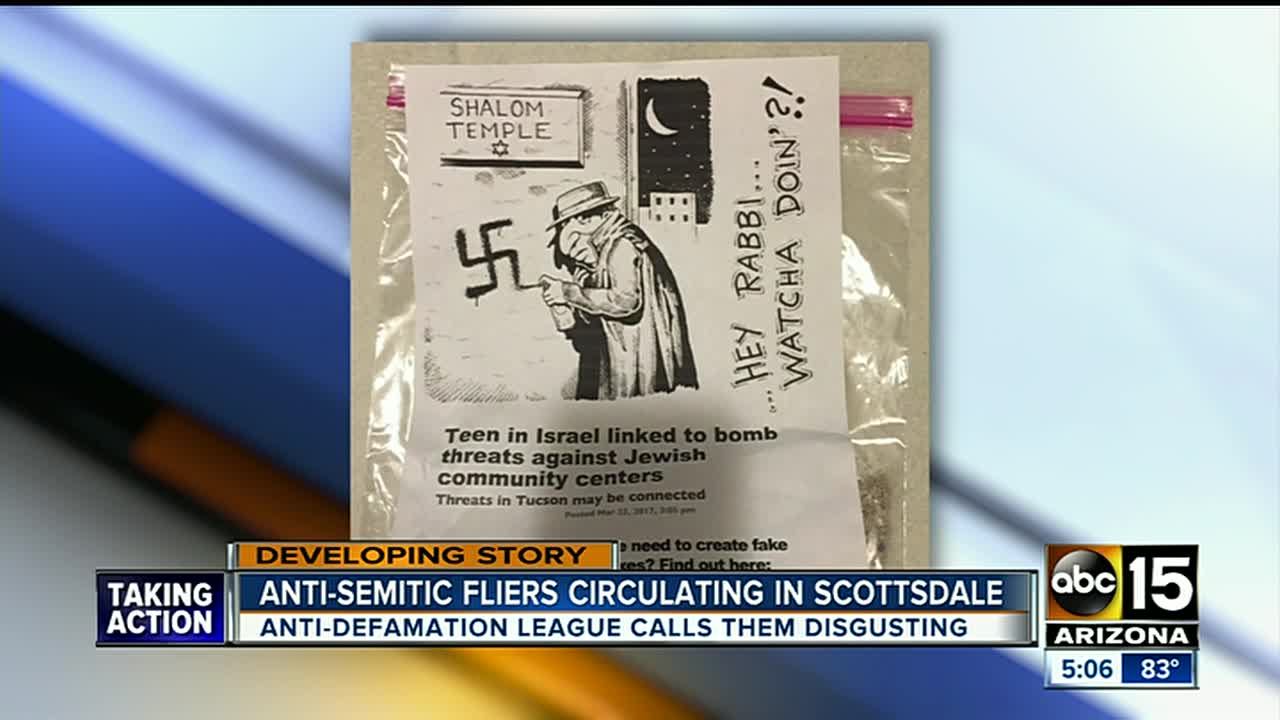 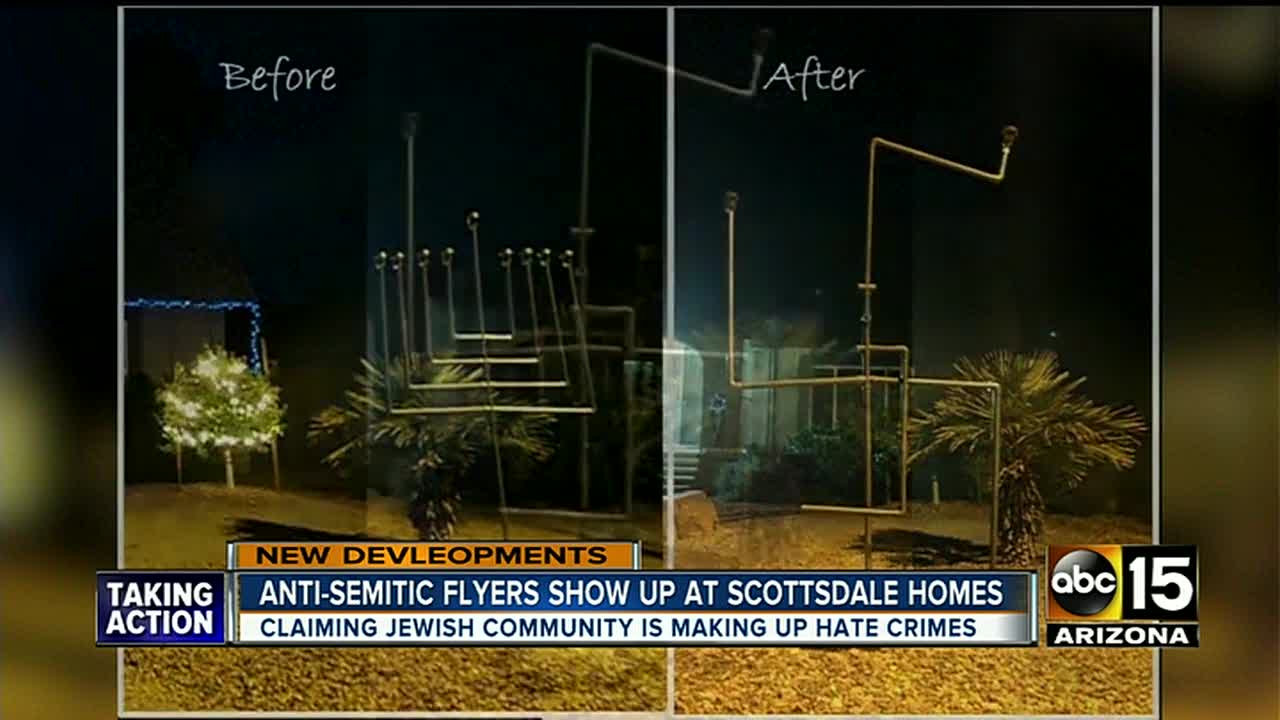 A shocking anti-Semitic flier circulating a Scottsdale neighborhood is being investigated by authorities, the Anti-Defamation League said.

The organization took to Twitter and said that they're "disgusted" by the fliers that emerged Wednesday morning in a Scottsdale neighborhood near Cactus and Scottsdale roads.

We r disgusted by anti-Semitic flyers left in Scottsdale neighborhoods this morning. We r reaching out 2 law enforcement. #ADLFightsHate pic.twitter.com/7kA8oAy63w

The flier depicts a person spray painting a swastika on a wall along with "...Hey Rabbi...Whatcha doin'?!"

It also states "Teen in Israel linked to bomb threats against Jewish community centers. Threats in Tucson may be connected," which is the headline of a Tucson Sentinel article written on March 23.

It then adds the question, "Why do Jews feel the need to create fake anti-Semitism hoaxes? Find out here: www.dailystormer.com."

The ADL has since posted a follow-up tweet praising the Scottsdale Police Department for investigating the fliers.

However, in a statement to ABC15, a Scottsdale police spokesperson said the fliers pose no specific threat to the community.

"Though potentially disturbing to some residents, the content did not violate any criminal statutes," the police spokesperson said. "The investigation is ongoing that this time."

Rabbi Jeremy Schneider said the fliers were passed out in his neighborhood and around Temple Koi Ami.

"This is where we live; where our kids play in the front yard," Schneider said.

He explained that is stomach turned when she saw his flier — but it was even more painful having a conversation with his kids.

"They'll say to us, 'Why do they hate us?' 'Why does somebody hate us?' 'What did we do?'" Schneider said. "And that really breaks my heart."

It's unknown who distributed the fliers found in the neighborhood and near the Scottsdale Jewish Community Center.

However, the offensive fliers come just days after Pinnacle High School in Phoenix was vandalized with racist phrases such as "white supremacy," "white power" and swastika symbols.

The graffiti was first discovered Saturday morning, and an ADL spokesperson called the incident deeply disturbing and "appalling."

So far no arrests have been made in connection to that incident either.

Another high-profile incident happened in Chandler last year when a menorah display was contorted into a swastika in a family's front yard.

"These incidents are happening," an ADL spokesperson said. "And here in Arizona, we know they are happening."

Schneider said that despite these hateful incidents, he's remaining positive.

"I think that this is not the act of the majority," he said. "I think this is the act of some very troubled and scared few in our society."