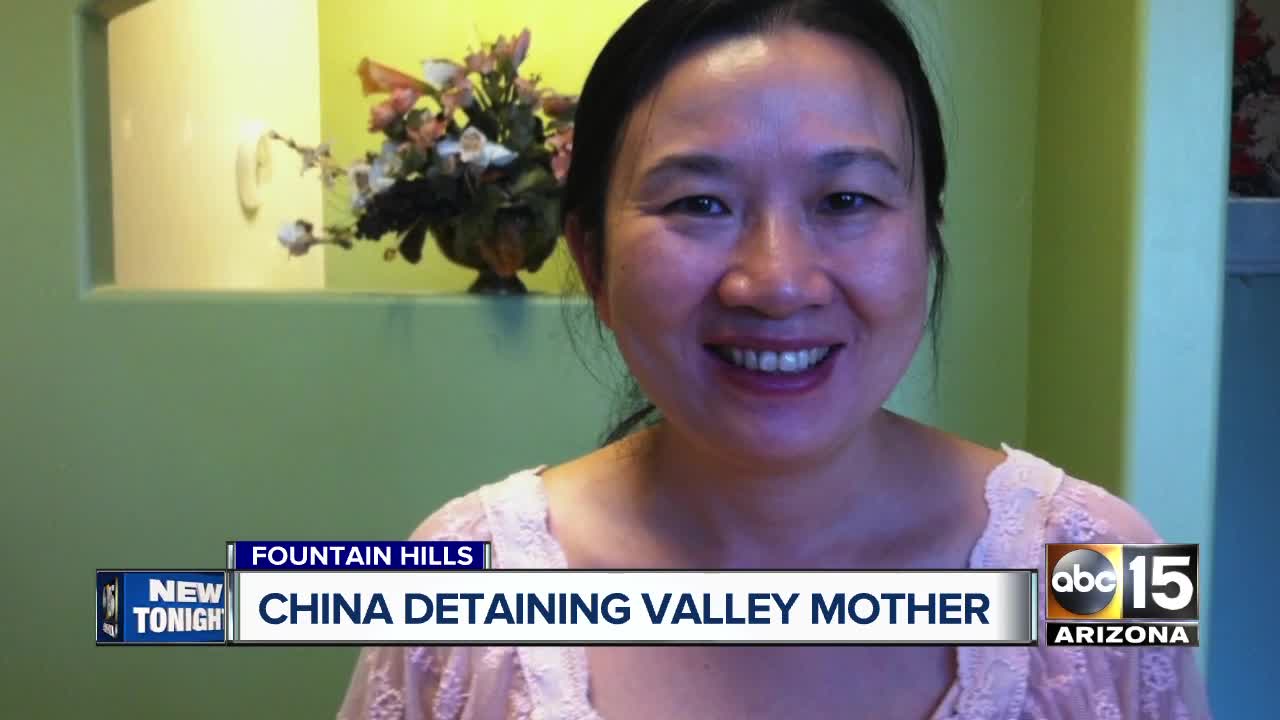 A Fountain Hills mother has been locked up in China for months after being detained when landing in Shanghai for her father's funeral. FOUNTAIN HILLS, AZ — A Fountain Hills mother has been locked up in China for months after being detained when landing in Shanghai for her father's funeral.

Shiping Jiang Peterson, who goes by Sue, is a massage therapist and owner of Asian Natural Healing. She has been in a detention center since August 29, when authorities took her into custody the minute her plane landed.

"They came onto the plane and escorted her off," said Dina Galassini, a client and close friend of Peterson.

"They took her phone and her American passport," said Merita Kraja, a close friend and owner of Euro Pizza Cafe.

Sue never made it to her father's funeral.

"The embassy said she is in jail and detained for 'the act of provocation,'" said Kraja.

"She is not a criminal," said Galassini.

"I think Sue does not deserve to be there. She didn't do anything," said Kraja. "We haven’t seen anything that says this is a formal charge, or what she said or did. It’s outrageous.'

Sue has been in Arizona for 11 years and is beloved in Fountain Hills.

"She is a highly respected businesswoman here," said Galassini.

"She's very sweet and always smiling," said Kraja. "She had a big following; she was a healer."

He waited for weeks in Shanghai for his mother to be released but finally returned to Fountain Hills.

Sue's friends have been checking on David regularly and working to keep Sue's businesses and home paid for and up to date.

"She has her properties here, she has her life, and we had to shut her business, and we don't know what's going to happen with her house," said Kraja.

Galassini said they are working on trying and getting power of attorney paperwork filled out so that friends can access more finances to pay Sue's mortgage.

The women also enlisted the help of their elected official, Congressman David Schweikert, whose office reached out to and got a response from the U.S. Consulate in Shanghai.

"On that letter, supposedly she said, 'I'm being treated very well.' I’m sure she says that under duress," said Kraja.

The letter also states that a consular officer with the American Citizen Services unit is visiting Sue at least once a month in prison, and working on getting her a Chinese lawyer to help fight the case.

There is no timetable for a trial, and new information indicates the detention could last much longer than a few months.

"I think more could be done," said Galassini. "I want to see a representative step up to the plate more and prove that the 'crime of provocation' isn’t just a cop-out."

Friends say they are worried about Sue's health and mental state.

"We want her back here. She needs to be back here," said Galassini.

"She's a U.S. citizen, and you go to a different world, and you lose everything," said Kraja. "What did she do? Absolutely nothing."