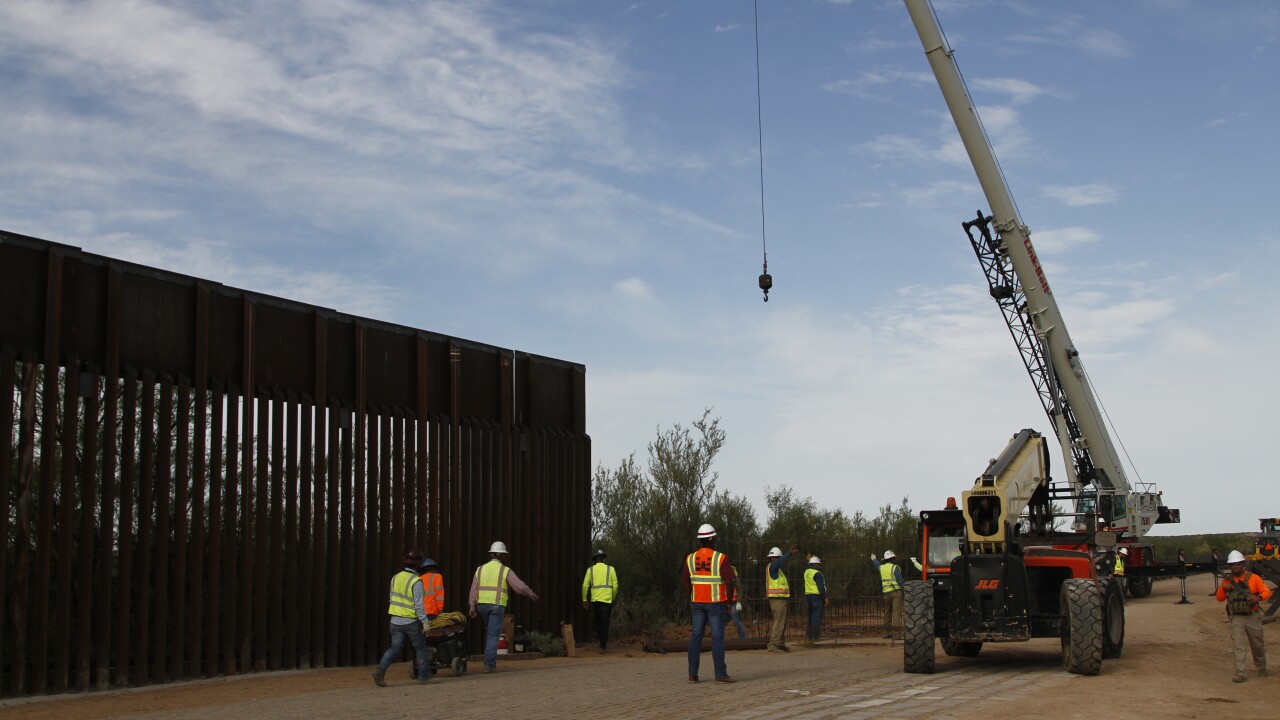 PHOENIX — Construction on a Pentagon-funded portion of border fence began this week near Yuma, just as federal officials revealed a list of Defense Department projects that will be cut to pay for President Donald Trump's wall.

The 30-foot steel fence will be built along the Colorado River in a section of border that had a big increase in migrant families earlier this year, but slowed to a trickle in recent weeks. The exact details of the project are unclear, but it appears it will consist of about 5 miles of fencing.

The launch of construction this week coincided with the Defense Department outlining $3.6 billion in military base projects being cut to pay for the wall -- developments that highlight the political dilemma for many members of Congress running for re-election next year. On one hand, they will have to answer for home-state military projects being slashed, but at the same time can rally the president's base on border security with the wall projects.

Trump declared a national emergency in February that freed up billions of dollars in Pentagon funds to pay for the wall, in addition to the $1.4 billion that Congress had already allocated. The president has largely prevailed in legal challenges brought by opponents and environmentalists, allowing wall projects to launch in Arizona and New Mexico in recent weeks.

Isaac Russell, who lives a mile from the new Yuma construction site, said it would impede on wildlife and damage precious water resources. Russell and a group of environmentalists who oppose more border barrier construction say the project is unnecessary.

"It's going to destroy the last untouched section of the Colorado River bed, again, with no appreciable impact to immigration," Russell said. "And it's being done under the false auspices of a manufactured emergency without due process, without public comment."

A majority of migrants crossing the border are families who present themselves to agents instead of trying to circumvent them.

At Organ Pipe Cactus National Monument near Ajo, Arizona, the government is already working on a 2-mile stretch of 30-foot steel fencing to replace older barriers. In New Mexico, crews are building barriers on a 46-mile stretch of desert west of Santa Teresa that will replace shorter fencing. Both projects are also funded by the Defense Department.

In a letter addressing several border wall construction projects on Tuesday, Defense Secretary Mark Esper said they "will deter illegal entry, increase the vanishing time of those illegally crossing the border, and channel migrants to ports of entry."

In Arizona, environmentalists have sued over some of the construction contracts, saying the government unlawfully waived dozens of laws to be able to build on protected lands. Two cases are pending in federal court, and the American Civil Liberties Union this week said it would sue to stop the use of more Pentagon money for construction.

Various forms of barriers already exist along about one-third of the border.

The construction comes as immigrant apprehensions have fallen sharply over the past two months because of the summer heat and a clampdown on migrants in Mexico.