University of Arizona prepares for surge in COVID-19 cases 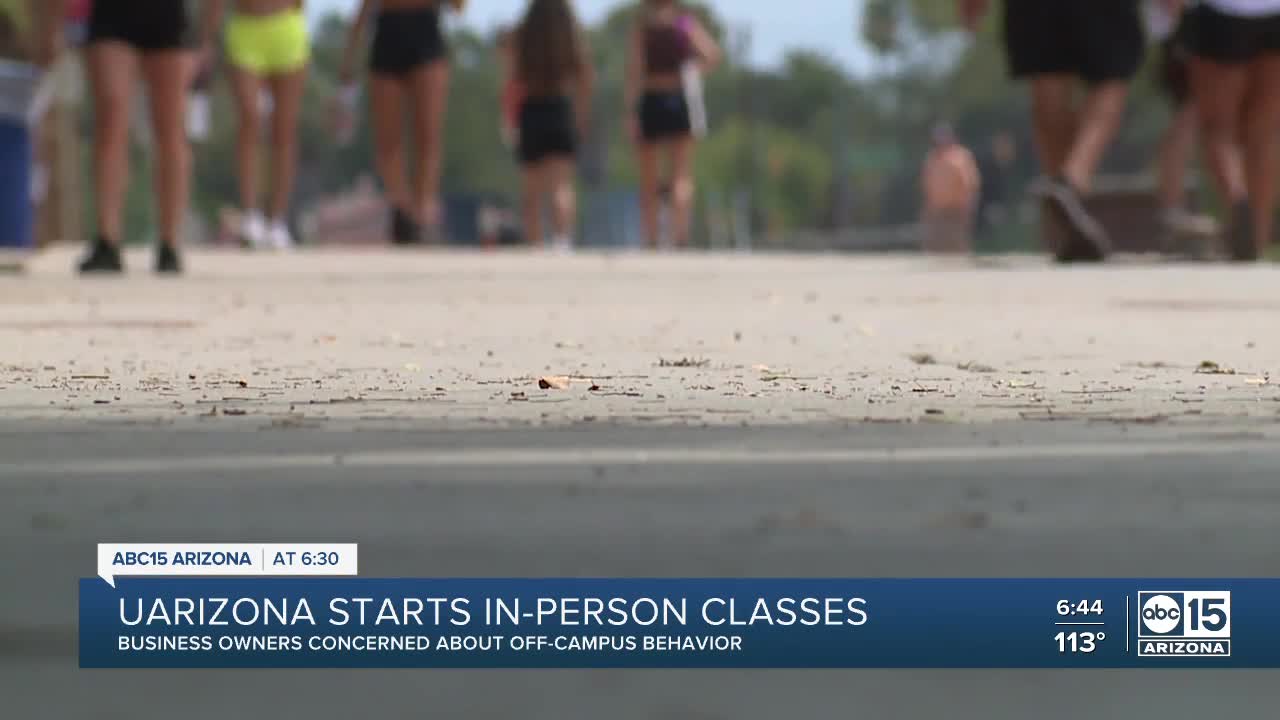 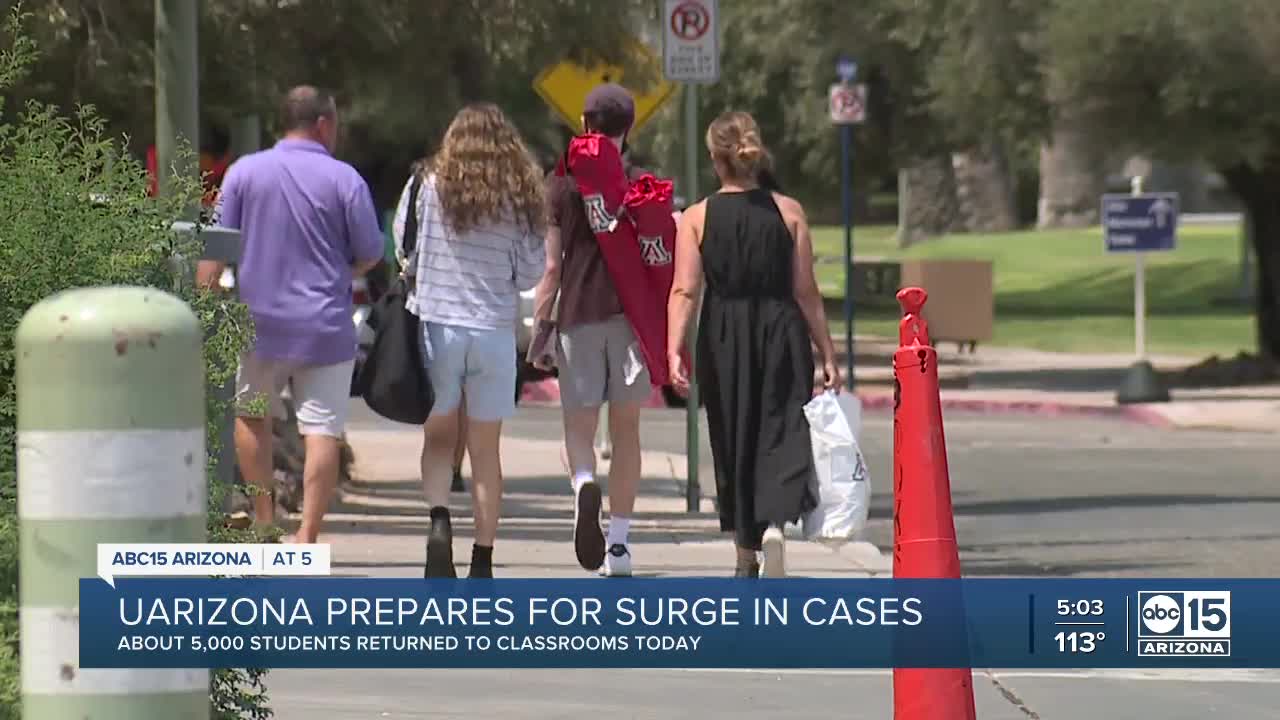 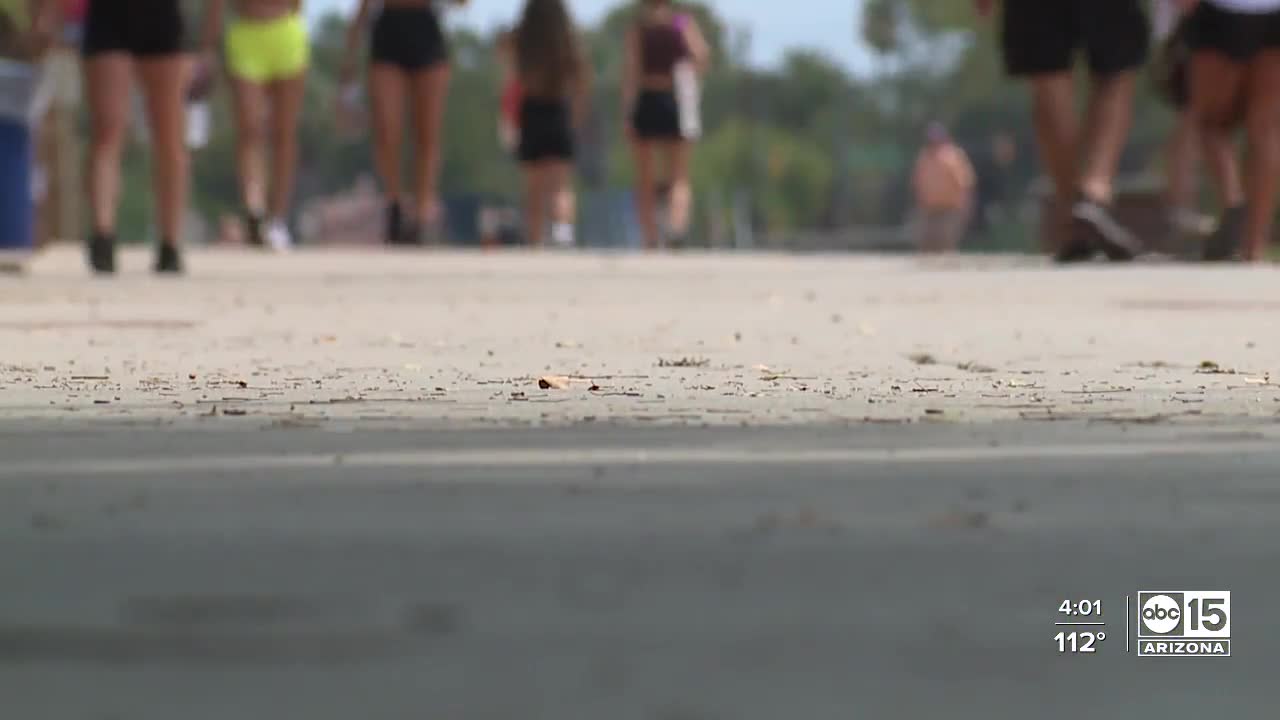 TUCSON, AZ — The University of Arizona had its first day of in-person classes Monday as people on and off-campus worry that a rise in cases will inevitably follow students' return to Tucson.

As of the morning of August 24, the university had administered 8,340 COVID-19 tests and 27 had come back positive.

"It's been nice, I'm really excited to be back in the swing of things, really nice to see all my friends," said senior Gordon Faust.

The university has several new protocols in place: several large tents on campus for studying, eating and outdoor workouts; hand sanitizers outside every entrance and inside every classroom; thousands of sneeze guards across campus, and masks required inside all buildings and outside when people can't social distance.

"I personally don't want to go back home, and I want to be here for as long as possible. I like how they're doing everything in their power so that we stay safe and healthy," said Abby Smith, a sophomore.

More than 5,000 students had to be tested before moving into dorms. The university has developed the rapid diagnostic antigen test that gives results back in as quickly as an hour. Students and employees are encouraged to get one for free when they return to campus, but testing is not required.

"Once a week we're testing 20 sites around our dorms. We pull sewer water and we can tell if the COVID virus is in there seven days before it shows up. And then that can lead us to look in that dorm a little further if we need additional testing."

University leaders are restricting large gatherings on campus and are working with fraternities and sororities to follow safety protocols. But they say ultimately, it's up to the students to do their part.

"You can have the best-laid out plan, but if protocols aren't followed, there are going to be challenges. That's why as a wildcat nation, we need to come together, said Kopach.

Several universities have had to cancel or delay in-person classes after outbreaks on campus.

Dr. Richard Carmona, the 17th surgeon general and head of the Campus Reentry Task Force, said he was concerned about students back on campus and having this happen to ‘UArizona’ during a weekly reentry update.

"We feel that we've done a very good job about creating an environment that's receptive to our students, staff and faculty returning in the increments we have explained. But they've got to adhere to those public health practices. As you've seen around the country and at other universities, they've tried for a week or two and they've had to shut down. They didn't have the good numbers to start with like we have. Maybe they didn't have the intensive programs that we have in place. But the point is, we're not taking anything for granted. The president has repeatedly said, now's the time to ‘Bear Down’ even more to make sure that those curves don't come back up and we stay best in class as far as transmissibility so that our students, faculty and staff can be here on campus safely."

Susan Briante, an English professor, said many faculty, staff and students are concerned about going back to campus. She's part of the Coalition for Academic Justice that's been against returning to in-person learning amid the pandemic.

"We want to make sure that decisions are being made based on health metrics and without sacrificing anyone's life on campus," she said.

Members of the coalition worry cases will spread into the communities outside the campus.

"We're not just a college town, we're Tucson. And we love being part of the UA community, but you can't bubble off the community, there can be all kinds of protocols in dorms and campus but what about the students living off-campus, working off-campus," she said.

U of A President Dr. Robert Robbins said they want to see what the data looks like after a couple of weeks, and if there's an outbreak, they have isolation dorms with a surge capacity of 600 rooms.

"We got the capacity in dorm rooms for isolation, we got the capacity in our hospitals in southern Arizona, ICU beds, to be able to withstand cases that test positive. That's going to be the mitigating factor of when we move to no in-person interactions," he said last week during a weekly update.

"And our concern is hold up, don't we not want to get to a surge?' So, we understand, we see what happened at UNC-Chapel Hill, what is the exit plan?" said Briante.

Business owners near campus are both concerned and excited to have students back.

Arlene Leaf has operated Tucson Thrift on the historic 4th Avenue for 40 years. She had to shut down during the pandemic and hasn't reopened yet. Her revenue is down 40%, but she wants to make sure it's safe to reopen.

North of downtown Brother John's is ready for anyone, especially students, to come back.

John Aldecoa, the co-owner, said they closed down in March and almost went out of business. The restaurant recently reopened at half capacity. They installed a new air purification system and are limiting crowds.

"Our father just passed away from COVID-19 a few weeks ago, so we are well aware of the impact it has on the community and families," said Aldecoa.

They've teamed up with an off-campus student housing complex across the street that will pay for two beers a day per student at the restaurant.

"It's kind of an aggressive way to get students to come in and welcome them back," said Aldecoa.