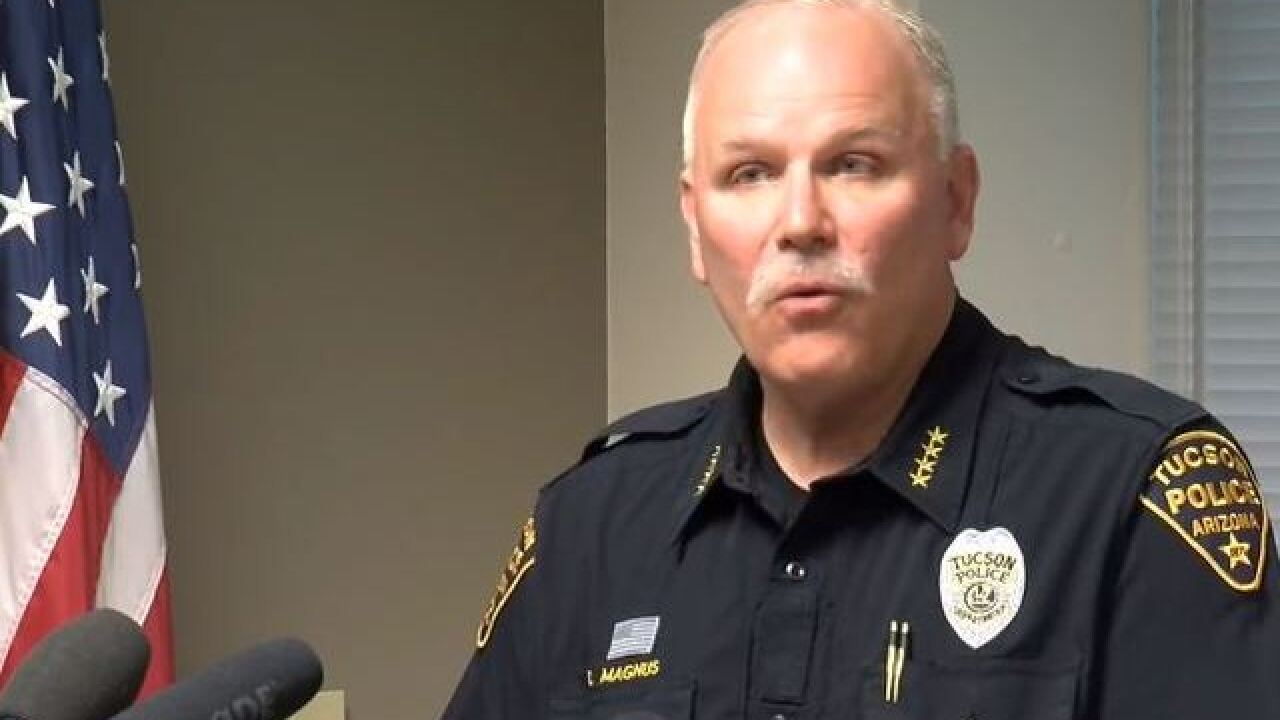 The bombshell from the chief came at a press conference, announcing the in-custody death of Carlos Ingram-Lopez on April 21.

The three Tucson police officers primarily involved in the handcuffing and monitoring of Ingram-Lopez all quit on June 18 before they could be fired.

Both Chief Magnus and Mayor Regina Romero said the officers would have been terminated because they "did not meet the standards of care or follow the policies that they were trained in."

The death of Ingram-Lopez comes at a time when millions across the country are calling for an overhaul of police departments and a re-thinking of officers' roles in communities.

This incident, captured on multiple body cameras, has divided many online. Some are quick to blame the victim, Ingram-Lopez, for his erratic behavior and the fact that he had cocaine in his system.

But the majority of people who have watched the gut-wrenching 20-minute interaction believe officers could have, and should have, done much more to humanely treat a clearly distressed man.

"WHAT HAPPENED TO MY SON?"

Only 12 minutes elapse from the time the 27-year-old father is cornered in his garage and handcuffed, until the time he stops breathing. The entire interaction though, Ingram-Lopez is physically and verbally distraught. He constantly begs and pleads for water, even asking in Spanish, "Agua, por favor."

Only one officer briefly acknowledges his persistent request and mentions to another officer about a bottled water in his nearby patrol car.

The majority of the time the officers tell him to "relax," "tranquilo," and "just chill." At one point an officer wonders aloud what drugs Ingram-Lopez may have ingested. Another officer threatens to tase the father.

Tucson police were quick to point out that "no blows, strikes, chokeholds, knee to the neck, chemical or electronic weapons were used, and no shots were fired during the incident."

Ingram-Lopez can be heard repeatedly crying out for his grandmother. After he stops breathing, his mother, almost instinctively, comes outside to check on him.

"What happened with my son?" she asks."We’re working on him," replies an officer."He’s not responding?""No, stay inside!"

Officers gave Ingram-Lopez Narcan hoping it would revive him. But he was not overdosed on an opioid and had already died. Minutes later, paramedics arrived and continued doing chest compressions.

“In this case, three officers did not live up to the high standards of the Tucson Police Department. They are no longer employed here. The vast, vast majority of our officers do their jobs well and responsibly and are rightfully disturbed and dismayed by any statements to the contrary. I continue to have the utmost confidence in the men and women of our police department," Chief Magnus said.

According to the Pima County Medical Examiner’s report, the death was ascribed to sudden cardiac arrest, with acute cocaine intoxication and an enlarged heart.

"The medical examiner’s report indicates Mr. Ingram Lopez had a very high level of cocaine in his system as well as an enlarged heart, but the cause of death is listed as unknown," said Chief Magnus. "So it will be up to others to determine what role, if any, the involved officers played in his death."

While the incident happened on April 21, city leaders indicated they did not talk with relatives until June 24.

"This is a terrible tragedy. I had a chance to meet with the family earlier today [and] express my condolences and let them know how much I sympathize with the loss of Carlos," said Chief Magnus.

"I gave them my deepest condolences," said Mayor Romero, who also mentioned the family had their lawyer present when she called. "Carlos Adrian not only lost his life, but his family lost a son, a grandson, and his daughter lost a father. I am deeply troubled and outraged by what happened."

Chief Magnus said the department made mistakes in how they handled the in-custody incident.

He admitted they did not notify the public after it occurred, but should have.

He also acknowledged that he and the executive team did not review the body camera footage quickly enough.

Magnus has served in the role since January 2016. Mayor Romero hasn't said whether she is accepting the chief's resignation.

The chief said he asked the FBI to review the case.

The Pima County Attorney's Office is still considering whether to file criminal charges against the officers.

The mayor was strong not only in the condemnation of the officers and their lack of action, but also in her desire to change the framework of the police department.

She called for more "immediate notification" of all city officials when there is an in-custody death, a new community safety division (to provide services to those with mental illness or addiction), increased power for the police auditor, and "an overhaul of the Community Police Advisory Review Board."

"Now we must listen to the conversation on police accountability and transparency. When officers do not perform as trained, they need to be held accountable," said Mayor Romero.